Metal has a weird streak a mile wide. If you’re honest with yourself, that’ s a big reason you like it so much. But yesterday I saw a new level of oddity. It was a premiere of a new song by Dream Theater. That’s a band I’ve never gotten into, so the news about the premiere of a new Dream Theater song wouldn’t have made me pause — except for where it premiered. If you didn’t already see the news, I could give you 100 guesses, and I’d bet a stack of money the height of your colon, if unraveled and nailed to a telephone pole, that you couldn’t pick the right answer.

Don’t waste your time. I’m telling you, you’d lose, even if you guessed the Kazakhstan Death Metal Observer and Livestock Market Journal. “The Enemy Inside” premiered at USA Today.

That’s right, that full-color organ of shallow American journalism made for people who don’t like to read much, found in printed form in motel rooms and airplane seat-backs across the length and breadth of Our Great Land. This is the same underground publication whose last story about metal was a report about a Black Sabbath concert in Bristow, Virginia, that began with this lively prose:

“The Rock and Roll Hall of Fame inductees (Class of 2006) took the stage here to flashing red lights and the sound of sirens, thundering drums and a devilish laugh — “Ha, ha, ha!” — emitted unmistakably by frontman Ozzy Osbourne.”

Ha, ha, ha! Yes, the kind of sound that only Ozzy Osborne could make unmistakably, that’s the sound I made when I thought about what this means.

I’m assuming that label people responsible for scheduling song premieres pick locations regularly visited by large numbers of the target audience for a release. According to this logic, someone expects the new Dream Theater album to be gobbled up by largely male business travelers with a median age of 50 and a median annual income of about $90,000 per year (the people USA Today defines as its “best customers”).

Speaking of The Wall Street Journal, did you see that they ran a feature on Norway’s Extol late last month? True story. I have to say, that left me scratching my head. I’m not puzzled that Extol would agree to be interviewed by The WSJ, I’m wondering what’s up with the editorial direction of the paper. It’s one thing for a nationally circulated newspaper to write about Black Sabbath (“Ha, ha, ha!”), but writing about Extol is actually getting into the . . . gulp . . .underground!

Maybe we’re just around the corner from seeing Hod’s new video for “The Ghouls Feed” on The Today Show.

Speaking of strange, I give you the World Famous Bob’s Java Jive. 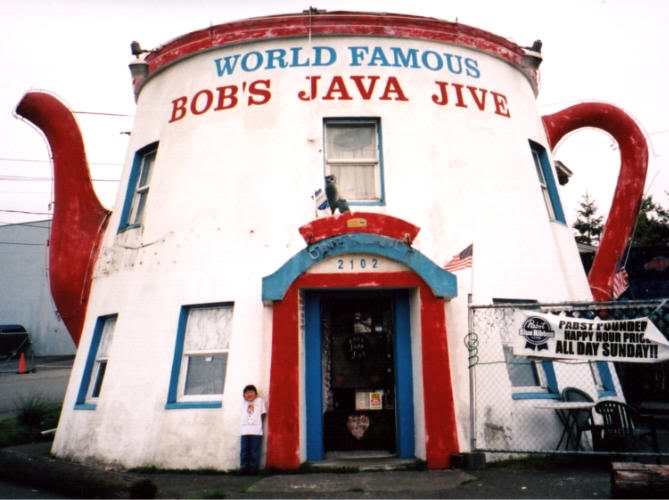 Located in Tacoma, Washington, it was built in 1927 as the Coffee Pot Restaurant by a veterinarian named Otis G. Button. The concrete coffee pot stands 25 feet high, with a 30-foot diameter. It was renamed Java Jive in 1955 after it was purchased by Bob and Lylabell Radonich.

Bob and Lylabell turned it into a music venue. According to a report I found, “Bob also made the Jive loosely Polynesian-themed, with a Jungle Room and two chimpanzees living there — ‘Java’ and ‘Jive.’ The chimps banged on a drum kit while Bob and Lylabell’s son played the organ.”

Bob died in 2002 at the age of 83, but his family still owns the place. As I discovered yesterday, they still have live music, at least on Saturdays, though the Jive seems mainly to be a karaoke bar the rest of the time, and a dive all the time.

And how did I find out about this place? Because yesterday I saw that VHÖL, Lesbian, and Trepanation (from Tacoma, not New Zealand) are playing there next Saturday night, August 17, from 8 pm to 2 am. I am so fucking tempted to see that show, not only because all the bands are killers, but also because . . . Bob’s Java Jive!

Unfortunately, the Jive is about a 2-hour trip from where I live, and that most likely means an overnight stay in Tacoma. I wonder if any customers have ever spent the night at Bob’s?

(I found most of my history about the Java Jive here)

By the way, if you’re interested in that new Dream Theater song, a lyric video went up for it after the USA Today premiere: