(TheMadIsraeli reviews the debut album by Witherscape, the highly anticipated joint effort of Dan Swanö and Ragnar Widerberg, which hits the streets today via Century Media.)

Without a doubt, the Swedish have an innate ear for metal of the melodic sort.  The Gothenburg scene, the forming of formidable death metal titans such as Bloodbath, Hypocrisy, and Grave, who retained a distinctly more melodic bent than many of their contemporaries, the proggy labyrinth-crafters like Opeth and In Mourning — all are testament upon testament to what can truly be called Swedish excellence.  When you tell people in a metal context that the music is Swedish, people tend to know exactly what you mean.  It’s melodic, yet retains a darkness and ferocity in a combination that’s distinctive.

If there were ever a single figure who sits on the throne of the Swedish pantheon, as the prime example of what I’m trying to describe, Dan Swanö is the man.  His musical endeavors, whether it be the groundbreaking Edge Of Sanity, his work in Bloodbath and Nightingale, his Moontower solo album, his influence has been staggeringly overpowering.  He has consistently produced music that is stellar, always at the top of its respective field.

Swanö has been on a hiatus for a while now, the last anyone heard from him being his collection of cover songs as Odyssey.  Now he has returned with a new album, with a new project named Witherscape, the album called The Inheritance.  It’s a concept album and one that will divide the Swanö fan base, to be sure, because this is a risky, unorthodox album for a figure best-known for his brutal yet melodic offerings.

Witherscape, in my personal estimation, is not metal.  Or it barely is.  What really resides here is an interesting prog-rock/doom-metal hybrid, laced with Swanö’s blood-curdling roars, which I am certain some people will find off-putting in this musical context.  This is a strange album, the kind of album that a figure like Swanö could have only done purely for the love and the fun of it.

A lot of you readers dived into the two singles from this album with excitement, but I wonder if you did so believing that the album would have more to offer than what you heard?  The Inheritance is almost exactly nothing but what you’ve already heard — very sparse on the death growls, and full of clean and acoustic interludes with only fragments of heaviness interlaced in between.  Some songs are definitely heavier than others, but the first single off the album, “Astrid Falls”, is pretty representative of the entire record.

Of course, it varies enough within its own soundscape to lend the diversity needed to keep listeners hooked, but that’s assuming you like the sound in the first place.  The beautiful acoustic guitar sections, the haunting clean sections, the riffs that hit like needle stabs, all create an interesting dichotomy of sound.  Songs like “Mother of the Soul” and “Astrid Falls” are brooding numbers that use depressive melodies and employ a reservation of the heaviness to maximum effect.  When Swanö unleashes his roars, or when the guitars turn distorted, you really feel the impact, the contrast of those moments.  On the other hand, you’ll find songs such as “Dying For The Sun”, a driving prog-rock number that employs bluesy riffing, cheesy prog keyboards, and Swanö’s soulful crooning vocals to maximum effect. 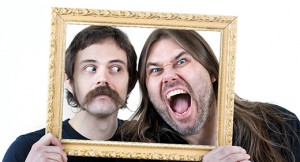 If this were any other band, I wouldn’t be reviewing it for this site.  If Swanö weren’t behind this, it wouldn’t be as good as it is, but thankfully it is, and therefore I can justify the immense departure from NCS modus operandi for this.  The Inheritance is definitely not for everybody, but for those eager and willing to explore, it’s an engaging and fun listen.

EDITOR’S NOTES: Vocals, drums, and keyboards on the album were performed by Dan Swanö. Ragnar Widerberg handled all guitars and bass-work, including the solos. The lyrics were written by Paul Kuhr of Novembers Doom. The cover art was created by Travis Smith.

12 Responses to “WITHERSCAPE: “THE INHERITANCE””