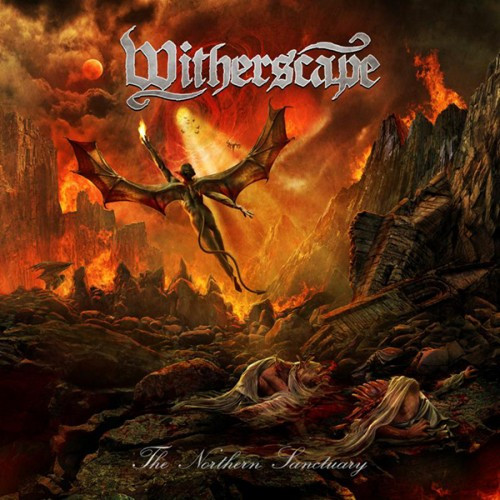 (DGR provides this extended review of the new second album by Sweden’s Witherscape.)

Witherscape’s debut album The Inheritance is one of those albums where I’m not sure where the internet fell on it as a whole. Usually you can get a pretty good sense of the fan consensus around albums a while after release, once we’ve all gotten off of the shiny new high and hindsight takes over. But The Inheritance is one of those rare albums where it seems like some folks really loved it and others were content to look at it as an interesting experiment with some odd quirks. I fell into the latter camp.

I thought The Inheritance had some incredible highs but overall it felt a bit like Witherscape were throwing caution to the wind, which is an awesome thing for a new project, but by the same token it also means that some parts just don’t work together. However, with a release like that comes the ability to analyze what really worked for you and what didn’t. If done correctly, a followup disc could make a band like this sound stronger than ever before and really execute upon the premise that (in this case) Witherscape was founded upon — which admittedly, I’m not quite sure of to this day. END_OF_DOCUMENT_TOKEN_TO_BE_REPLACED

We’ve reviewed Be’lakor’s Vessels already, and I share Andy’s opinion that Vessels is a really good album, but recent weeks have brought even more news — though I can now keep this a little more truncated. One is that the band premiered a lyric video for the song “Smoke Of Many Fires” over at Horror Society, and two, if you prefer your music streams less lyric-video-heavy, Bloody-Disgusting grabbed a whole album stream here. END_OF_DOCUMENT_TOKEN_TO_BE_REPLACED

Contained in this here news roundup is a veritable smorgasboard of new music, some of which came to us by the bands themselves and other times was discovered whilst I was spinning in circles on the internet. Either way, there’s a ton of stuff what floated down the river here — only to be captured by my net/boat/if only there was some sort of metaphor or object I could compare my news capturing ability to… ah well, maybe next time. Let’s get on with it. END_OF_DOCUMENT_TOKEN_TO_BE_REPLACED

(TheMadIsraeli reviews the debut album by Witherscape, the highly anticipated joint effort of Dan Swanö and Ragnar Widerberg, which hits the streets today via Century Media.)

Without a doubt, the Swedish have an innate ear for metal of the melodic sort.  The Gothenburg scene, the forming of formidable death metal titans such as Bloodbath, Hypocrisy, and Grave, who retained a distinctly more melodic bent than many of their contemporaries, the proggy labyrinth-crafters like Opeth and In Mourning — all are testament upon testament to what can truly be called Swedish excellence.  When you tell people in a metal context that the music is Swedish, people tend to know exactly what you mean.  It’s melodic, yet retains a darkness and ferocity in a combination that’s distinctive.

If there were ever a single figure who sits on the throne of the Swedish pantheon, as the prime example of what I’m trying to describe, Dan Swanö is the man.  His musical endeavors, whether it be the groundbreaking Edge Of Sanity, his work in Bloodbath and Nightingale, his Moontower solo album, his influence has been staggeringly overpowering.  He has consistently produced music that is stellar, always at the top of its respective field.

Swanö has been on a hiatus for a while now, the last anyone heard from him being his collection of cover songs as Odyssey.  Now he has returned with a new album, with a new project named Witherscape, the album called The Inheritance.  It’s a concept album and one that will divide the Swanö fan base, to be sure, because this is a risky, unorthodox album for a figure best-known for his brutal yet melodic offerings. END_OF_DOCUMENT_TOKEN_TO_BE_REPLACED

Back in May we helped spread the word that one of metal’s Renaissance men, Dan Swanö, had created a new project with multi-instrumentalist Ragnar Widerberg named Witherscape and had released a debut single named “Astrid Falls”. Since then we’ve seen the cover art for Witherscape’s first album, The Inheritance, created by the talented Travis Smith, and we’ve learned that the release will be a concept album, telling a story that takes place in a remote village in northern Sweden in the late 1800’s. According to Swanö, “The central character lives in Stockholm and comes from wealth, and upon the death of his family he’s informed by the family lawyer that he has inherited a large estate up north. Having been oblivious to the estate’s existence, he decides to investigate, and once he’s there ‘all kinds of weird shit happens.'”

And now today, via a DECIBEL premiere, Witherscape has brought us a new lyric video for a second track from the album, “Dead For A Day”. Rather than make my usual effort to describe the music, I’ll just let Mr. Swanö do it himself:

“‘Dead For A Day’ is one of those songs that just wrote itself. I was strumming on the acoustic guitar one morning and it just poured out of my fingers. At first, I had no idea what to do with the song since I felt it was perhaps a bit too commercial for Witherscape, but after I played the demo to Ragnar he insisted that it must be on the album! I love how the song moves between the mellow verses à la Crimson I and II to the more brutal, yet melodic chorus, in the tradition of ‘Uncreation’ and ‘Twilight’ through the groovy but ‘undanceable’ 9/8 section that leads to one of Ragnar’s best guitar leads of the album.”

Yes, it has clean singing, but it also includes Swanö’s awesome growls, as well as some wonderful lead and solo guitar work and a hooky melody. Holy hell, I’m really digging this. Listen to it next. The Inheritance will be released by Century Media on August 6 and can be ordered HERE with a t-shirt or HERE without one.

END_OF_DOCUMENT_TOKEN_TO_BE_REPLACED

This post involves breaking news about two iconic figures in the world of heavy music — Trent Reznor and Dan Swanö. The news is that both will have new music coming, and we already have a taste of what Dan Swanö’s new project has been creating, with a song that premiered yesterday.

This appeared late yesterday on the Nine Inch Nails Tumblr:

“I’ve been less than honest about what I’ve really been up to lately. For the last year I’ve been secretly working non-stop with Atticus Ross and Alan Moulder on a new, full-length Nine Inch Nails record, which I am happy to say is finished and frankly fucking great. This is the real impetus and motivation behind the decision to assemble a new band and tour again. My forays into film, HTDA and other projects really stimulated me creatively and I decided to focus that energy on taking Nine Inch Nails to a new place. Here we go!”
— Trent Reznor, 5.28.13. New NIN album later this year on Columbia Records.