Mumakil are a band that I discovered late into their career. The group have been active since 2004, yet it took a split with a personal fave Misery Index for them to land on my radar. But, it is proof that splits can have some success in promoting bands because what Mumakil got up to during the six minutes they occupied on that split grabbed me, and I then found myself somewhat enamored with the group’s 2009 release Behold The Failure – especially because it partially served as my entry and tutorial to more death metal oriented grindcore, as opposed to the usual short blasts and Napalm Death that was my previous exposure.

It’s hard to believe that four years have passed since Behold The Failure; and you sound like a crazy person when trying to tell people that you’ve waited four years for another thirty-five minutes of music. However, Mumakil are a band who have fused death metal into grindcore without morphing into full-blown deathgrind, instead creating the sort of ugly, angry grind that is fueled entirely by blastbeats. When you name your band after the giant war elephant of Lord Of The Rings fame, it’s a signal that you will be a representation of that thing during a war charge. It’s going to be loud, brash, fast, and all too reckless. If you aren’t doing that, then you’ve done a disservice to the mumakil name.

Mumakil deal in spades with the sort of hammering grind mentioned above that just feels absolutely ugly. Everything about it sounds like a sweaty, roaring beast. It makes everything around it feel that way, so much so that one can only imagine a live show being a beer-fueled, swamping, swirling vortex. 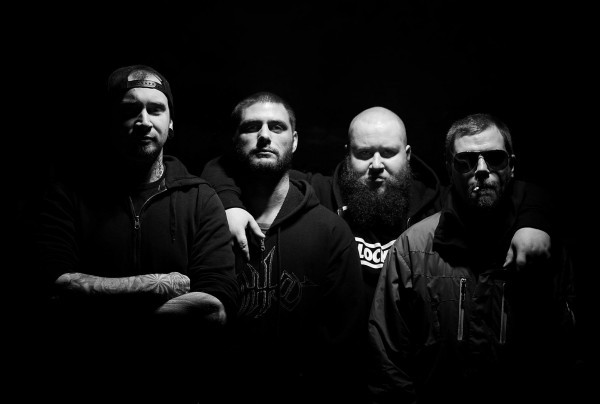 There are branches of grind dealing with such a variety of different subjects, and Mumakil have chosen the section dealing with lumbering, ferocious anger. Twenty-four songs lie in wait on Flies Will Starve, and there is absolutely zero reprieve whatsoever.

The band start in high gear, and for most of Flies Will Starve they basically never let up. Once you hit play on this disc, there is a one-second breath and then “Death From Below” kicks in. Amongst the roaring blasts of Flies Will Starve is a sense of sheer hatred fueling the subject matter at hand. On Behold The Failure, Mumakil carved out pretty similar ground with songs like “The Order Is Fucked”, and Flies Will Starve amps it up as well in songs such as “Parade” and “Shit Reminders” – two songs that have only one profanity-less track in between them. They’ve also made a song called “Piss Off” into a two-parter; take that as you will.

You’ll note that I’m not really trying to describe each track. That’s because Mumakil are not kidding when they call their genre blastcore, because sometimes the only thing that changes in a song is the lyrics. The guitars are a swirling finger workout that just never stops, and drummer Seb Schacher (who has since had to exit the band for private reasons, to be replaced by Benighted/Disavowed drummer Kevin Foley) beats the heck out of that snare drum on these tracks.

Sometimes you really need this sort of righteous fury, and there are different movements amongst the twenty-four present. For instance, a pretty big shift toward the simpler punk riffs by way of Disfear style (initially displayed in the aforementioned “Shit Reminders”) makes an appearance at the mid-section; it makes Flies Will Starve a bit more dynamic than the previous Behold The Failure. If the descriptions of how much blasting happens on Flies Will Starve seem ridiculous, Behold was even more so, at only three seconds longer. However, Flies is more interesting on the composition front because of what the band meld into their own take on belching out hellfire at high speed.

That said, I do commend Mumakil for trying like hell to make every song different this time around. It may have cost us three tracks in comparison to the previous disc, but overall Flies Will Starve feels like a more varied experience. They bounce between songs that are within the fifty-second range and stuff that lands around the two- to three-minute mark, which in grind terms means they might as well be playing funeral doom. There’s still the occasional moment of not knowing if you’re in a new song or if the track you’ve landed on happens to be one of the grind-level Homerian epics that they’ve done.

Vocalist Tom has a harsh-as-hell bark that switches with his high scream, and they’re both often on display – especially during songs like “Waste By Definition” and the speed rager “Begging For The Obvious”, where he also breaks out his guttural lows, which you don’t hear too often otherwise. Long story short, dude has a talented and varied range but often sticks to his mid-level yell that is just a brutal, angry grunt. 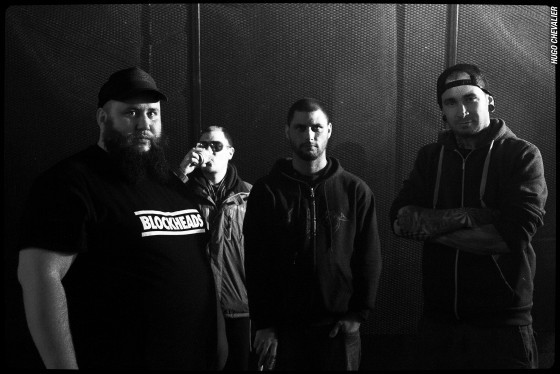 Since Seb is resigned for most of the disc to endless blasts to keep the Mumakil sound going, a lot of the differentiation in tracks comes down to guitarist Jeje, who puts in quite the finger workout in between bouts of just shredding away at his guitar. A couple of the riffs sound like full-blown warfare on the fretboard and others are wormy enough to provide visual images of his fingers flying up and down the neck. He and bassist Benj both stay pretty low-end too, which again plays into the sound of Mumakil as a huge, stampeding beast, and they follow each other relentlessly throughout.

Mumakil are one of the purest sounding grind bands to have been given a wide reach (via Relapse Records) in a long while. They’ve been slowly gathering steam and now they’ve gotten the chance to accelerate into a high gear with Flies Will Starve. In one sense, they would make a good introduction to grind for folks who think the genre is defined entirely by short songs and barely understandable lo-fi production;  the band don’t really make any compromises, but they veer closer to death metal in their song lengths – which is a plus, because the production on this disc makes it very easy to identify what is happening, and then you can take those structures and apply them to bands you may have previously written off and recognize what they’re doing.

On the other hand, Flies Will Starve is also relentlessly brutal — the band almost never let up. The only breath you can really take is when Mumakil occasionally take a break in certain songs away from the blasts on drums for a couple of seconds to try something a little different. It’s still angry and ugly music for angry and ugly people – gateway band or not. No one is going to challenge that these guys absolutely crush it when the time comes. They’ve definitely got the circle pit and blast routine down to a science.

As someone who has spent quite a bit of this year moving through doom genres and death metal, the speed of this band is a breath of fresh air. It can be just what you need for a quick hit of pissed-off music to cap off a shit day. Hopefully, we don’t have to wait four-plus years for Mumakil to hand out their next round of grind beatings, because this sort of no-holds-barred, no-compromise brutality needs to be out there and easily visible as an outlet for people who need to unleash all their anger. They’re one of those bands who are great at letting rage out and turning it into a weapon.

4 Responses to “MUMAKIL: “FLIES WILL STARVE””