You may have noticed that new music round-ups have been scarce this week. We’ve been going overboard on the reviews instead. However, I have been maintaining a constant vigil and collecting worthwhile new things as I’ve seen them. Only problem is that the list has grown so damned long, even after just a few days of watching and not writing, that the list has become unwieldy. So I’ve done some fairly random paring down and split this catch-up round-up into two parts, this being the first.

Do you sometimes wish that revered old bands who have fallen apart would just stay down, so you can be left with your fond memories instead of having them tarnished with a mediocre comeback? Unfortunately, it seems that comebacks tend to be mediocre a lot more often than awesome. But judging from the first new song in this round-up, that probably won’t be the case with Chicago’s Broken Hope.

They recorded five albums between 1991 and 1999 and then split up, but they’re coming back with a new album named Omen of Disease that’s due on October 20. The song that premiered yesterday is “Flesh Mechanic”. It’s a grisly riff monster, fresh guts dripping from its teeth, and trench-level roars bellowing from its throat. The solo in the song is white hot, and the whole thing is brimming with feral energy. If only all comebacks sounded this putrid. 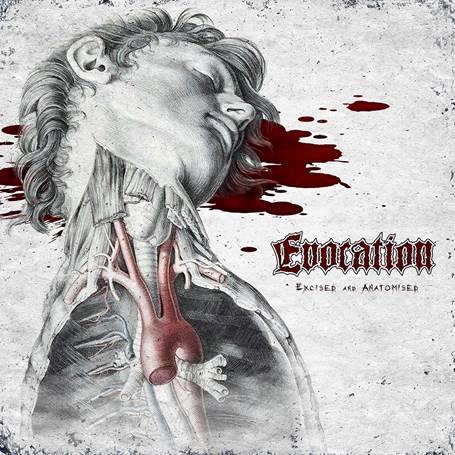 Sweden’s Evocation have been a long-time favorite of mine, and I’ve been looking forward to their next release, Excised and Anatomised, which is an EP of cover songs and will be released on vinyl as well as digitally. One of the songs they’re covering (and it’s a timely choice) is a Carcass song called “Corporal Jigsore Quandary” from that band’s 1991 classic, Necroticism – Descanting the Insalubrious. I found the description of what Evocation had to do to get the cover right very interesting. This is from Evocation guitarist Marko Palmen:

“The first guitar solo ‘Human Jigsaw’ (originally recorded by Bill Steer) on the track landed on my table to perform on the EP. I’m normally a rhythm guitar player but once in a while I also make a solo. But this solo was really over-the-top when it comes to complexity for me. I had to bring home the guitar from the rehearsal room and more or less practice the solo for two months before nailing it in the studio. In the end it was definitely worth it, now I can tell my children in about 10 years that ‘Listen kids, Dad did the solo on this track!’ And to be honest I believe we will be awarded with a Grammy nomination for that performance. [Laughs]

“Otherwise, the Carcass track was also a challenge in many other ways. First of all the arrangements for almost everything on the track are atonal and don’t follow any logical structure. That makes of course the work covering the track so much more difficult. And then the lyrics are more or less like reading from an autopsy protocol with words that one has never encountered before and that makes the lyrical work quite challenging as well.

“But in the end when we nailed the track we all were very pleased with the result. I think we all felt quite bonded to the track and loved the way it turned out. Overall it was a great experience doing some cover tunes. One gets a unique view into the mind of another creative artist and that will probably leave lasting impressions with us for our future musical career.”

When you hear the cover, with Palmen’s words in mind, I think you’ll understand what he means about the difficulty in executing it. It added to my appreciation of both the original and the cover — and Evocation really do nail it. That fat Evocation guitar tone alone is worth the time all by itself — and Palmen’s solo is a neuron twister. And man, when they hit the slow-down near the end, it’s a ticket straight to headbang city.

For now, the song is streaming exclusively at DECIBEL’s on-line site, so you’ll need to go HERE to listen to it — which I recommend you do.

UPDATE: The song is now on YouTube, and here it is:

Century Media is selling the EP at this location. It will be released on August 20. It includes other songs originally written by Bolt Thrower, Edge Of Sanity, At The Gates, and Napalm Death (Evocation are covering “You Suffer”, prolonging it to a whopping four seconds). I’m really up for this. 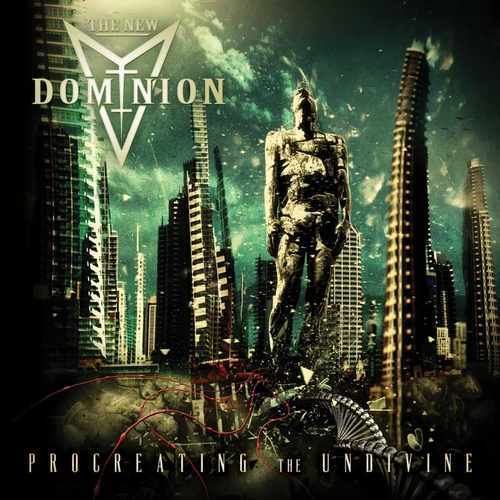 The New Dominion are a Dutch band recently recommended to me by NCS reader Andreas. Their second album, Procreating the Undivine, was released on June 1, and it’s available through the band’s web store, as well as on both iTunes and Amazon mp3. The song that Andreas recommended is “Perverted To Perfection”. It’s an utterly galvanizing blast of groovy, thrashing death metal, but with a moody, atmospheric interlude that elevates the song into something really intriguing and an overarching melody that lingers in the mind. If you’re like me, you’re going to want to play this more than once. An impressive new discovery.

I’m also including the second single from the album, “Atonement of Species”, which is pure groove heroin right from the start.  You might want to do some warm-up neck exercises before listening to it.