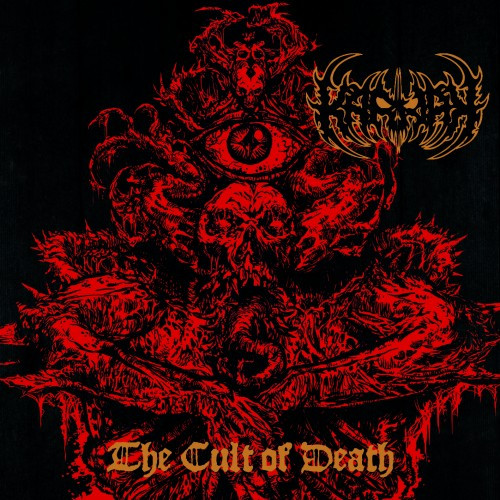 I’ve been listening to our advance copy of this little five-song offering from Italy’s Karnak once or twice a week for the past month. Not like clockwork, because the urge strikes me at odd times, but the urge persists.

I had certain expectations about the EP before hearing it. The ghoulish red-and-black cover art by the talented Marco Hasmann (Fleshgod Apocalypse, Vile, Vomit The Soul); the description I saw of the band’s music: Aleister Crowley Death Metal; the references in the accompanying press release to Incantation, Nile, Morbid Angel, and Krisiun; the EP’s name: The Cult of Death — all of those signposts pointed to a certain kind of grisly, heavy-riffed, old-school death metal.

Given my tastes, I had a feeling it would be appealing if done right, but maybe nothing more than a kind of solid musical comfort food — old recipes that might or might not be prepared competently, and nothing more than that. But it turns out that Karnak have created something distinctive and surprising with those old-school ingredients, while maintaining a dominant aura of brutality. 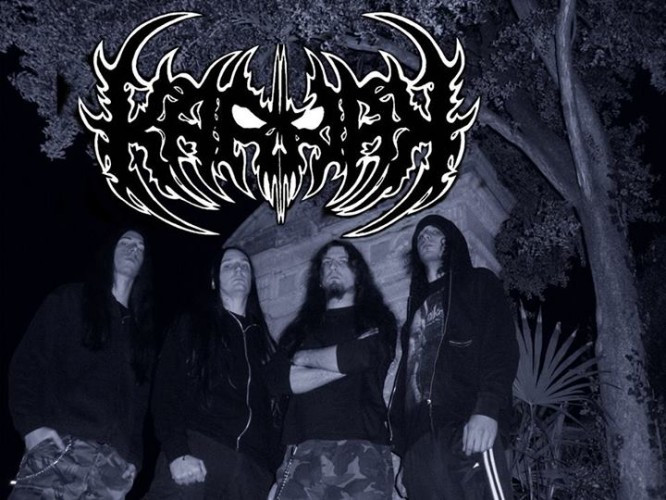 The first four songs are really four parts of a single work, with a concept that is linked to the infamous Mr. Crowley. The relatively brief intro track (which functions as Part 1 of the work) is simply a reverberating tribal drum rhythm, the alternating high and low drum tones gradually building in volume over a deeply submerged guitar or bass tone. That same motif returns at the end of the fourth part of the work (“The Construction of the Pyramid Gamma”), to close the circle.

In between those bookends, Karnak make use of other repeated patterns. Most of the time the riffs are nearly atonal, more percussive and atmospheric than melodic (the one exception coming in the slow, distorted, melodic chords in the last part of the quartet before those tribal drum rhythms return). There are segments in which the guitars and bass function as a rapidly firing riff-gun, punctuated by short bursts of tom-and-snare hits that come at not-quite-predictable moments. They vary between big stomping rhythms, a foggy miasma of droning noise, slow putrid doom chords, and a sound resembling a jackhammer tearing up concrete pavement.

The music is mainly mid-paced, but Karnak also periodically unleash explosions of jagged, jabbing riffage and machine-gun drumming. And throughout the varying moods of the four-part song, you hear horrific roars (usually in a bestial monotone), mixed with occasional shrieks and strident yells.

Apart from the almost quirky instrumental concept that’s unspooled in these first four songs, two elements have made them especially interesting to me. First, much of the time the drumwork is refreshingly non-standard. The timing, tone, and choice of tom/snare combinations (which are usually more dominant in the sound than the bass drum) are often really inventive, though the drummer is quite capable of just blasting the shit out of his kit too. And second, the guitar solos are real eye-openers.

When they come (and the come in each of the last three parts of the song), they contrast vividly with the heavy, radioactive, low-end guitar and bass lines. They’re high-pitched, with little distortion. They flare like white-hot streamers in the darkness. They move from almost languid swirling patterns to jaw-dropping pyrotechnics. And their style is not what I was expecting. They’re worth the price of admission all by themselves.

The last song on the EP is a cover of Celtic Frost’s “Jewel Throne” from To Mega Therion.  Compared to the original, Karnak slow down the pace a bit and deepen the guitar tone, increasing the song’s heaviness factor, but otherwise it’s a very faithful homage (including very good mimicry of Tom G Warrior’s gravelly yells). The original song is a classic, and Karnak do it justice.

It appears this EP was recorded between 2011 and 2012 and it may have had some kind of limited previous distribution last year, but the press notice we received states that it will be released on September 2 by Grindhouse Music, and it can be ordered on CD here. I’m not sure if there are plans for a digital download.

I’d really like to stream the whole EP for you, especially those first four tracks, but I haven’t asked permission, so I’ll do with what I’ve found on YouTube, which is the final part of that four-song work that includes the long drum finish. For the hell of it, I’m also tossing in a new song, “The Jaws of Megatherion”, which has been recorded for the next Karnak full-length. I like it a lot, too.

And for the further hell of it, belong that more recent song I’m including the album art for the forthcoming full-length, rendered by the magnificent madman Paolo Girardi. 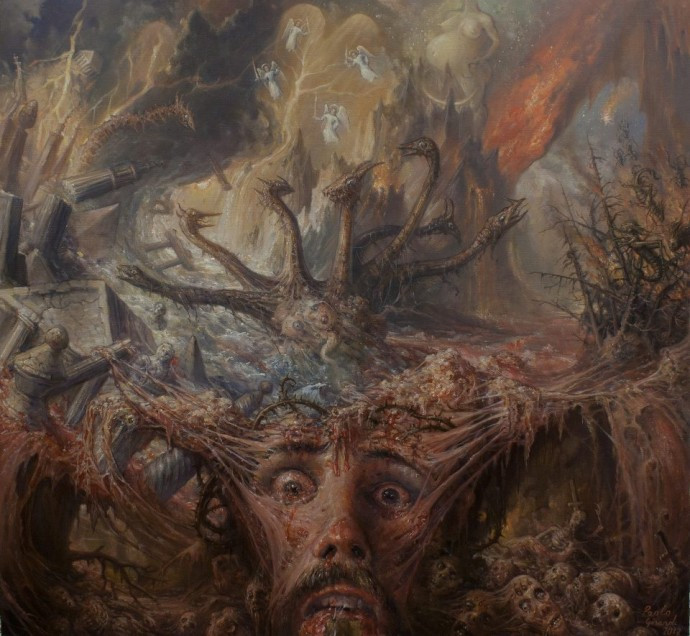 6 Responses to “KARNAK: “THE CULT OF DEATH””