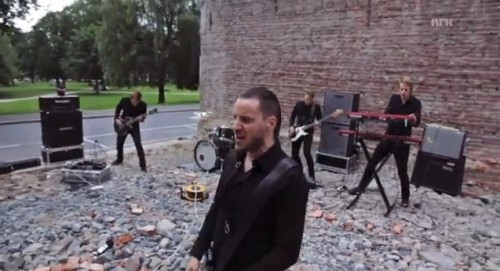 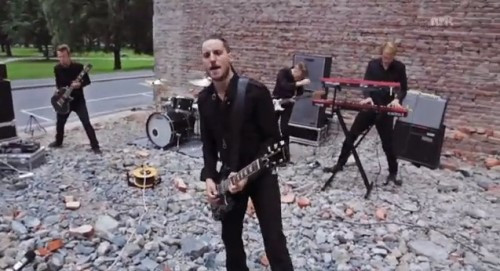 (DGR brings you a new live video by Norway’s Shining, plus an amusing history lesson about the Grünerløkka district of Oslo, the accuracy of which is probably somewhere around the median accuracy of all history.)

Pleasant surprises abounded this morning when I discovered that blackjazz group (and pretty much shoe-in’s for one of our “most infectious song” titles) Shining had recorded a live video and put in a hell of a high-energy performance of the song “I Won’t Forget” for a news station out in Norway.

The way they did it is actually really cool — setting up in an empty alleyway/blank plot where a former building was located, and then just playing to the crowd of about fifteen to twenty people who had gathered to see what the heck was going on. Some folks seem morbidly curious about the display of musical madness going on and other folks are clearly digging it. I like it because it’s probably the most raw performance footage you can catch of these guys, even when compared to the Live Blackjazz DVD. I’ve watched this clip a couple of times and I enjoy the sort of improvisational aspect of not really having a stage and watching Munkeby just wander around screaming at the camera while playing.

This clip was recorded in a district in Oslo, Norway, known as Grünerløkka – which, as soon as I can uncramp my fingers from the keyboard voodoo required to get the umlaut and crazy strikethrough letter O, I will share some fun facts about, because we here at NCS believe in educating readers and providing folks something to gaze at while they’re trapped in their nine-to-five (or in my case, four to 12:30). Plus, we don’t really have to worry about offending any actual Norwegians because Norwegians as a whole are a learned people with a high literacy rate (up in the high 90% areas!) and many of them have learned second languages. Reading NoCleanSinging would just be a waste of time for them, so we can be sure that none of them is actually here!

According to Google and the font of all human knowledge, Grünerløkka was named after a man by the name of Freidrich Grüner, who had purchased a mill in the area from King Christian V of Denmark in 1672. For those of you who are curious how long ago that was but aren’t so good with your maths, The Oakland Raiders last competed in a Super Bowl in 2003. They lost, because that’s all the Raiders ever do, to the Tampa Bay Buccaneers. 1672 was about four days before that. 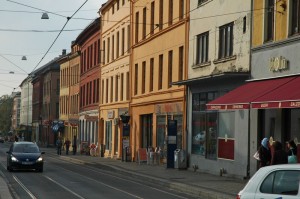 A man by the name of Thorvald Meyer bought and built up a huge chunk of the district’s main street, which is now named Thorvald Meyers Gate. It is Norwegian law that the mere act of buying property requires that you have a street or city named after you at some point later on in History. The city became a working-class area in the 19th century due to its proximity to a river. It is unknown at the moment if anyone purchased land on the river and therefore if the river is named after them. At the moment, it is called the Akerselva River – which coincidentally is where the group The Faceless got the name for their breakthrough album.

Grünerløkka is also host to the largest Manatee migration in the pacific northwest, whereupon the creatures cross the river Thames in order to mate in the Akerselva’s warmer waters. During this time Løkals (as they prefer call themselves) prefer to greet each other with a demonstration of The Dance of The Manatee. This was witnessed and recorded by a scribe named Andrew Darroh Sudderth and he would write about it later in song form – which would become a minor radio success.

Currently, nobody actually resides in Grünerløkka. Instead, løkals rotate throughout the year, having fallen deep into debt whilst betting on the local hobbyist sled-dog and turtle races. Having done so, they often find themselves in a form of indentured servitude wherein they reside in the town in order to keep things going normally while someone else falls into debt. At that point, the person who is closest to paying off their tab is allowed to leave. Perhaps not coincidentally Grünerløkka is sister cities with Reno, Nevada.

We hope you’ve enjoyed your lesson on Norway and it’s various perks today, as well as checked out the performance video for Shining’s “I Won’t Forget”. You can read my review of One One One here, which is about as educational as the above piece.