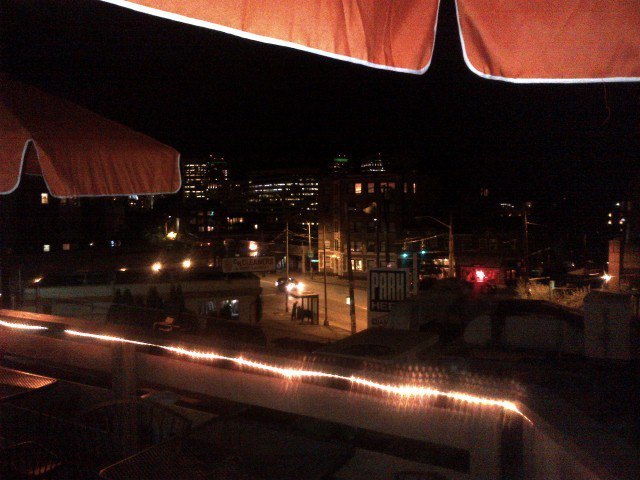 The NCS Staff Confab continues, with yesterday’s convocation ending in the wee hours of this morning on the outdoor deck of Captain Black’s in Seattle, the view from which is shown above in a photo snapped by Andy Synn and whose motto is “Eat. Drink. Pillage.” There was no eating there, for reasons I will come to. There may have been pillaging, though your humble editor cannot say with certainty because he left to go home at a reasonable hour because his fucking day job is forcing him to leave Seattle on an early flight this morning. However, because I am now seeing Facebook posts by my cohorts that went up between 2:45 a.m. and 3:45 a.m., pillaging may have ensued. There was definitely drinking.

Before I left the comfy confines of Captain Black’s, I did witness one of the trip’s high points, as we were introduced to a dude named Gerald who just happened to be on the premises enjoying a few brews. He is not only an NCS reader, but also someone for whom NCS is his primary online portal to metal. Damned cool.

Captain Black’s is how the day ended. It began with a trip to Beth’s Cafe, ranked #3 on the Travel Channel’s list of World’s Best Places To Pig Out, #2 on the Food Channel’s list of Top 5 Big Breakfasts, and featured in the Man vs. Food TV series (in which the man lost). There, our own Andy Synn locked himself in mortal combat with the 12-Egg Triple By-Pass Omelet, which was approximately the size of a wedding cake, stuffed with bacon, sausage, and double layers of Swiss and cheddar, laid out on a bed of hash browns deep enough to drown in, and weighing approximately as much as a newborn elephant.

The rest of the NCS staff were more modest in their culinary choices. I satisfied myself with the 6-Egg Triple By-Pass Omelet, which weighed only as much as the head I used to have. Still, I felt heavy with child after finishing, and considered a trip to Harborview Hospital for a quick stomach-pump afterward. The gladiatorial throwdown between Andy Synn and the 12-egg behemoth was an inspiring thing to witness and a memory we will all treasure, in our nightmares. Alas, though it was a near thing, Mr. Synn was left bleeding in the sand, his abdomen distended to grotesque proportions, his eyes glazed over, and a thin rivulet of drool oozing from his mouth.

In between our own version of Man vs. Food and more swimming in an ocean of beer at Captain Black’s, there were other activities, not including work on this blog. Fortunately, we do have some additional guest posts for today. All of us do appreciate your continued patience with our continued fucking-off.

I am super-pissed that I am having to leave town. I am looking forward to returning for a final night of debauchery on Thursday before my NCS comrades wing their respective ways home. Assuming, that is, that any of them remain among the living by Thursday night, given that I will be unable to exercise any restraining influence on their naturally self-destructive impulses between now and then.

I leave you, and them, with this video of 14-year-old Tina S performing Patrick Rondat’s guitar adaptation of “Presto”, the third movement from Antonio Vivaldi’s “Summer”, from the “Four Seasons”. The video was uploaded by her teacher Renaud Louis-Servais on July 29 and has amassed 1,316,529 hits as of this writing, though I only saw it this morning for the first time, thanks to a tip from our supporter Mike Yost. And yes Mike, it’s fuckin’ epic.