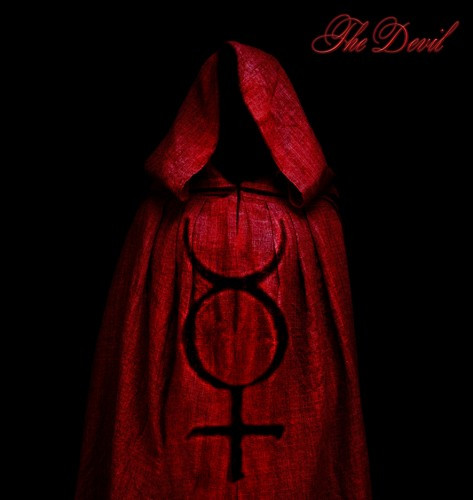 (Booker comes through for us in our inebriated time of need with this guest review of the debut album by The Devil.)

Hello fellow readers. Well, with our dear leader and his brethren (or, according to some conspiracy theorists, just Islander and his multiple online personas) otherwise occupied indulging in copious liquid refreshments (or, worried about butt chastity, it’s not clear which…), I thought I’d make myself at home and spam you all about one of my favourite surprise finds this year – The Devil.

Sometimes the greatest finds are ones you know nothing of, where you just hit play and randomly stumble across some aural goodness, which is just the case for my experience of this little gem: officially a November 2012 release, I found this album through Candlelight Records’ Bandcamp page sometime early this year, and after the initial shock of realizing there was no band previously claiming the all-metal moniker of ‘The Devil’ (“hey, who’s that you’re listening to?”….. “I’m listening to the devil!! Muah-ha-haa”  \m/), I hit play and found myself strangely intrigued at what this band had to offer….

This is The Devil’s first album, in which they offer up a kind of instrumental doomish slab of riff. I say ‘kind of instrumental’ as there’s no vocals as such, but the vocal elements are instead replaced by audio samples to provide the thematic, lyrical, and conceptual content; and boy does the album cover some conceptual ground: from that favourite of metal topics – the prospect of nuclear war (see ‘Extinction Level Event’ video below) — to the military-industrial complex, alien invasion (“Universe”; video below), life after death, long-gone civilizations, 9/11, and more. 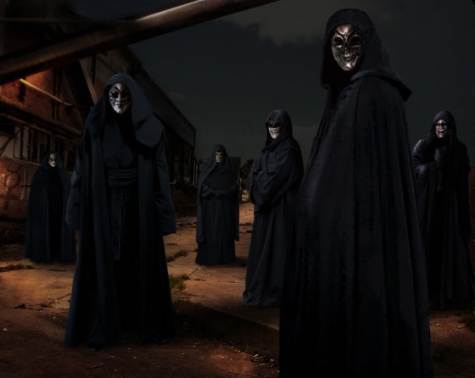 With most samples coming from the 20th century (9/11 perhaps being the only exception), various U.S. presidents feature prominently, military generals, Martin Luther King’s 1963 speech, radio and television broadcasts, diplomatic speeches and interviews, all of which coalesce so that the album as a whole is like a tour through modern history and iconography. I had the somewhat surreal experience within a month or so of getting this album where I decided on a whim to actually read The War Of The Worlds, and promptly realized the opening pages are featured in the album (presumably from the Orson Welles radio broadcast).

Appearance-wise, this six-piece seems to be going for something akin to Ghost, donning semi-religious masked apparel. Their identities and even their origins seem rather obscure: while Metal Archives places them from the UK, their Bandcamp page includes Philadelphia in the tags. If the idea of a band calling themselves The Devil, cloaked in anonymous robes, and putting out music made up of what could best be described as a traditional metal backing (guitars, drums, bass), with keyboards and nothing but audio samples for vocals sounds gimmicky or cringe-worthy, don’t worry, you’re probably not the first to have that thought pass your mind – as one of their supporters on Bandcamp noted, it’s “much much better than it ought to be”.

In the wrong hands this combination could come out a disaster, or like something out of the audio-sampling hey-days of the 90’s or early 2000’s. But somehow the careful crafting of such a range of excerpts that navigate through pertinent themes, and in themselves tell a story, coupled with musical accompaniment that hits a suitable ambience for each topic, comes together in a way that works.

The project in some respects has parallels with the book Seven American Deaths and Disasters by Kenneth Goldsmith, particularly the coverage of 9/11 (‘World Of Sorrow’), and to some extent also the assassination of JFK, which briefly features on ‘Devil & Mankind’. Kenneth’s book is the simple idea of publishing raw transcripts of broadcasts from various key events in US history. He noted in a recent interview on The Colbert Report:

“Every transcription has the mark of its own era on it….. and so now these guys that are broadcasting this are not prepared in any way for this to happen [the assassination of JFK], and suddenly they are improvising – they’re riding by the seat of their pants, and they’re making it up as they go along… and this happens again and again and again [in the transcripts in the book].

“The World Trade Center chapter of the book is remarkable in this way, because these are morning shock jock guys that go into work that day figuring they’re going to do their schtick and then a plane goes into a building: they’re stuck in the studio narrating something that they have no idea about, and this is incredible how they have to make it up as they go along.”

For all intents and purposes, he could be describing ‘World Of Sorrow’, which is one of the few tracks featuring only unscripted radio and TV from that infamous day. Similarly, the mark of different times gone by can be heard throughout every track on the album. Also of relevance from that interview is Stephen Colbert’s assessment:

“When I read this, I feel like I’m some sort of time-travelling aesthete, who is coming in to sample other people’s shock and tragedy… I’m tasting their disbelief, and the way it’s changing them forever”

… and so it feels to me when listening to The Devil. By the end of the album you’ve covered the scope of the hopes and dreams of different eras, the human desire to understand the universe, our own consciousness and mortality,  people’s reactions to moments of disaster, the perpetuation or perpetual fear of war, and even their considerations on the role of government and international relations.

Perhaps it’s the fact that all of this is interspersed with spooky keyboard lines, coupled with riffs that go from some kind of rocky accompaniment (“Extinction Level Event”) to more doom-esque tempos (Martin Luther King’s speech in “Intervention”), or perhaps it’s that you’ve just heard an hour or so of veritable snuff audio – the words of people, most of whom will now be dead, talking about such human concerns, many of which still resonate today.… either way, by the end I was left with a somewhat disconcerting feeling of indistinct unease. The sum total of the listening experience is like being reminded that you’re only in one point in history of this global humanity stumbling forward through time, encumbered by all these human hopes and fears, and not really sure of where it’s going. But maybe that’s what the band were going for, in calling themselves ‘The Devil’.