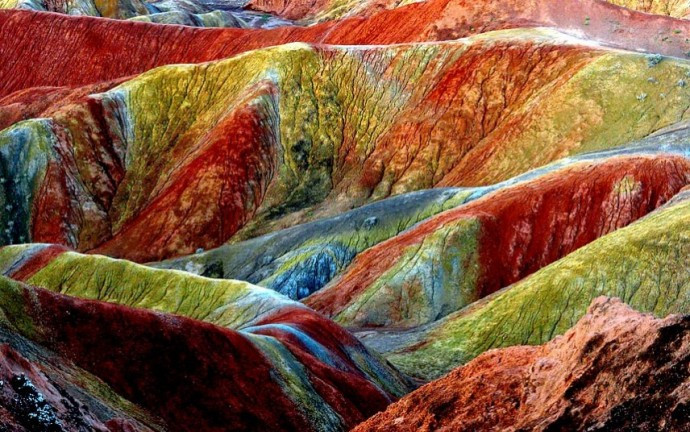 Welcome to another edition of THAT’S METAL!, in which we collect photos, videos, and news items about things I think are metal, even though they’re not music. I haven’t compiled one of these features in many weeks, so I’ve got quite a haul. Let’s get right to it…

The first item (via TYWKIWDBI) is the gorgeous photo shown above, which appeared as The Telegraph’s Picture of the Day on July 29. It’s the Danxia Scenic Area in Zhangye City, located in the Gansu Province of northwest China. “Danxia, which means rosy cloud, is a special landform formed from reddish sandstone that has been eroded over time into a series of mountains surrounded by curvaceous cliffs and many unusual rock formations.”

What?  You don’t think the beauty of the natural world is metal?  You think I’m getting soft?  Well, how ’bout this: 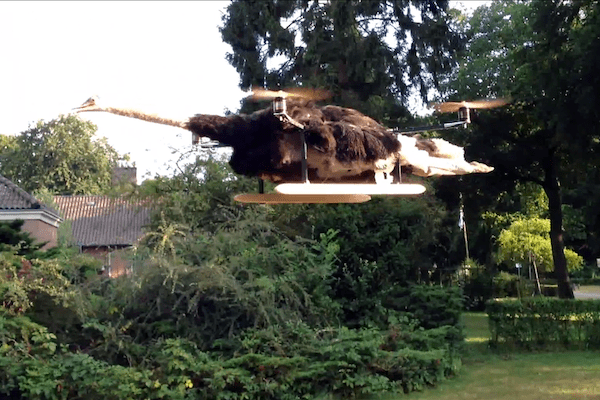 Why is this next item metal? Because it’s so fuckin’ demented, and it involves a dead thing. Sometimes fuckin’ demented is all you need, but when you add a corpse, then it’s solid metal.

This video shows the maiden voyage of the OstrichCopter at the Zwarte Cross Festival in the Netherlands on Sunday, July 28, 2013.  Oh, you Dutch people, you so crazy!

The OstrichCopter was created by visual artist Bart Jansen and technical engineer Arjen Beltman. They first located a local farm that was willing to donate an ostrich corpse. Jansen picked up the bird (“It smelled and about two litres of crap came out of it in my car”) and then took it to a taxidermist to have it skinned and tanned. Then he and Beltman shaped the skin around a form and hooked it up to a custom-made “quadrotor” machine, and voila!

Why would anyone do such a thing? Jansen’s answer: “I thought it was really funny to make fly a bird that can’t [fly].”

This isn’t the Dutch duo’s first foray into the fertile field of corpse coptering. Last year they created OrvilleCopter, which they made from the remains of Jansen’s cat Orville, who was run over by a car. You know you want to see that, so here:

Yeah, I know. That was pretty fucked up. Having lost my cat of 18 years last year, I couldn’t even finish the video. And speaking of fucked up, Jansen is reportedly now working on a jacket made out of roadkill hedgehogs. He currently has 19, but needs more. So, you know, if you have any dead hedgehogs lying around, you know where to send them. 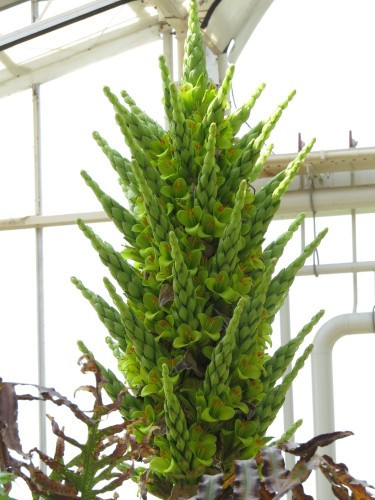 I don’t know about you, but I think that plants which “eat” sheep are metal. You’re looking at one of them above. Its scientific name is Puya chilensis, and this particular specimen has been housed at the Royal Horticultural Society’s Garden Wisley in the U.K. According to a BBC report, “in its native habitat of Chile, the plant uses the spines to ensnare sheep and other small animals. After they starve to death and decompose, the animals nourish the plant through the soil, acting as a gruesome fertilizer.”

This made the news recently because the plant at the RHS garden bloomed for the first time this summer. The green/yellow flowers appear at the top of tall spikes that rise above a cluster of razor-sharp spines at the base. The spines are the business end of the plant, where the sheep are ensnared.

Speaking of the plant’s first-ever flower, Cara Smith, a horticulturist at the Garden Wisley, attributed the success to keeping the plant nourished on a liquid fertilizer. “[F]eeding it on its natural diet might prove a bit problematic,” she admitted. Maybe so, but I bet this fucker would flower more often with some fresh sheep corpse in its diet. I bet they could get some from Bart Jansen and Arjen Beltman. 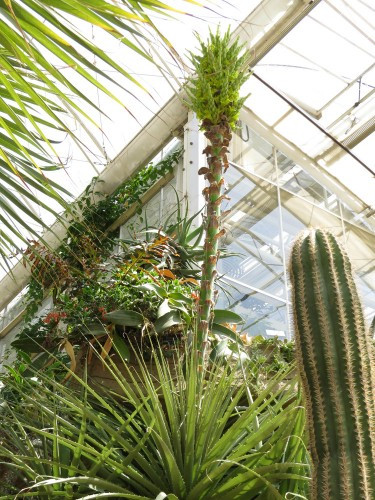 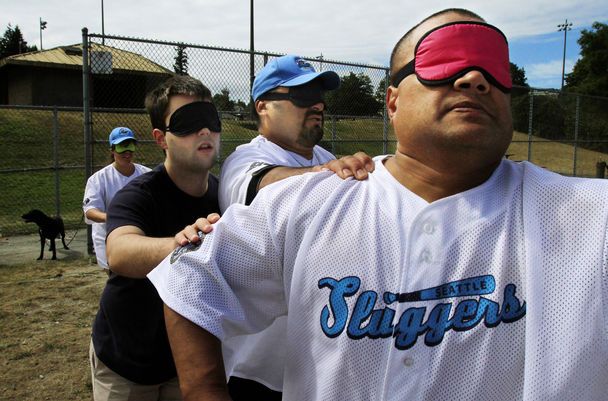 At least in the US, Central America, and parts of the Caribbean, lots of people grow up playing baseball or softball. I did. Most of those people, including me, weren’t very good at it, which is why we’re doing things like writing and reading metal blogs instead of getting juiced on roids and pulling down $170,000 per game whether you play or not. But if you think it’s tough to play ball, think about how much tougher it would be if you were blind.

Yesterday I saw a story in the local Seattle newspaper about Beep Baseball. There is in fact such a thing as the National Beep Baseball Association (NBBA), in which more than 20 teams of completely or partially blind people compete against each other in a modified form of the Grand Old Game; all the players wear blindfolds so that the partially sighted players are on a level playing field with the completely sightless. The recently formed Seattle South King Sluggers are one of those teams. The game works like this:

“The center of the sport is a 16-inch circumference softball with a device that beeps once the ball is pitched. It weighs about a pound and has a slight cushion on the outside, but not so much that a player can’t use an aluminum bat to pop it into the outfield. A sighted teammate throws the pitch. Batters get four strikes and one ball max.

“Each defender plays in a numbered zone on the field, and a sighted ‘spotter’ on the team is allowed to call out one time the number of the zone where the ball goes.”

The whole story at The Seattle Times is a cool read. I don’t think I need to explain why this is metal. 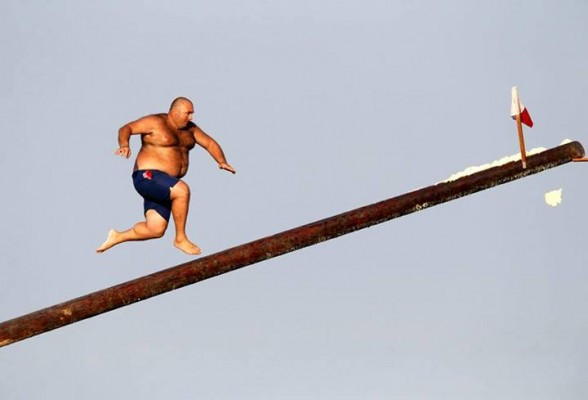 Speaking of out-of-the-ordinary sporting events, I give you the gostra, which is metal because it’s so ridiculous. And if you don’t think metal can be ridiculous, then you must have missed Ilud Divinum Insanus.

According to Reuters, which featured the above image taken on August 25, 2013 as one of their recent Photos of the Week, the gostra is a game stretching back to the Middle Ages, in which young men, women, and children have to make their way to the top of a greased pole and try to uproot one of the flags to win prizes.

From May to September during the religious feast of St Julian, patron of the town of St Julian’s, outside Valletta, Malta, “there is hardly any weekend when a town or a village is not celebrating the feast of its patron saint or other saints revered in different churches.” And what better way to celebrate the feast of a saint than by running up a greased pole?

Yeah, I got video:

(I lifted this item from one of Phro’s FB posts, which, obviously, are quite strange.) 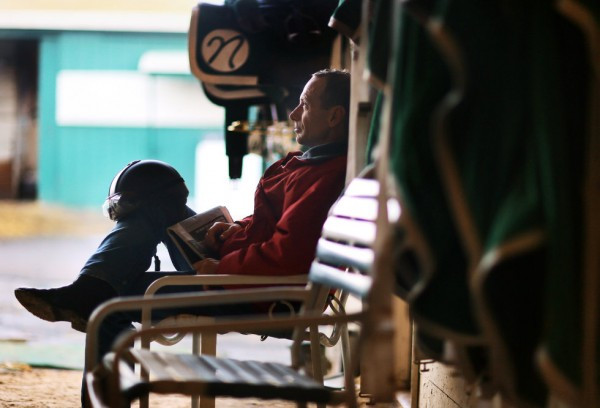 Well hell, let’s stay with sports for one more item and talk about Russell Baze. You may not have heard of him, but he’s the ironman of thoroughbred horseracing, the winningest jockey in American history. He has hit the ground over 100 times, broken his cervical spine, pelvis, tailbone and collarbone, and suffered multiple compression fractures in his back and neck. He’s 55 years old and still riding, almost exclusively in Northern California.

Recently, “at Golden Gate Fields, a down-on-its-luck racetrack perched on a marvelous nugget of real estate, a rocky outcropping that juts into the East Bay near San Francisco”, Baze road in his 50,000th start on a horse named Finish Rich in NYC. “The combined distance [of all those races] adds up to about 348,000 furlongs, or 43,500 miles, nearly twice the circumference of the earth. Just watching the wire-to-wire replays would require a nonstop marathon of 48 days.”

For his 50,000th race, before a tiny crowd, Baze wore a camera. The video of the race became part of a long multimedia profile in the New York Times written by Pulitzer-prize-winning journalist Barry Bearak. The following video is just one part of the profile, which is a fascinating thing to read and watch if you’ve got the time (here).

You can probably tell that I think horse racing is a beautiful, adrenaline-pumping thing to see. So I’m staying with it for one more item, especially since the following video captures “one of the most iconic moments in the history of sport”.

This is Secretariat’s race at Belmont 40 years ago, the race in which he won the Triple Crown, having already won the Kentucky Derby and the Preakness. He was so favored to win that only four other horses were entered and the track didn’t even take “show” bets. In fact, he was so favored by bettors that he would have paid more to show than to win. Over 5,000 winning tickets were never redeemed because the holders valued them more as souvenirs than for their cash value.

To this day his speed for 1.5 miles has never been equaled. That is definitely metal.

Okay, for some of you the last two items may have been borderline too-dramatic-and-eloquent. For you, here’s a short video of a boa constrictor eating a female howler monkey head-first in the Brazilian Amazon.

I go back and forth. I can’t quite decide whether I’d like to see more of this fatality, but I’m leaning toward “that video was too fuckin’ short”.

(Via a tip from Austin Weber. More details about this rare video can be found here.)

To wrap up this installment of THAT’S METAL!, let’s move from the brutal to the beautiful again. Every frame in the following video is a photograph taken from the International Space Station and assembled by Knate Myers. Nice choice of music, too (even though it’s not metal): John Murphy’s “Sunshine (Adagio in D Minor)”. Spectacular.

View from the ISS at Night from Knate Myers on Vimeo.