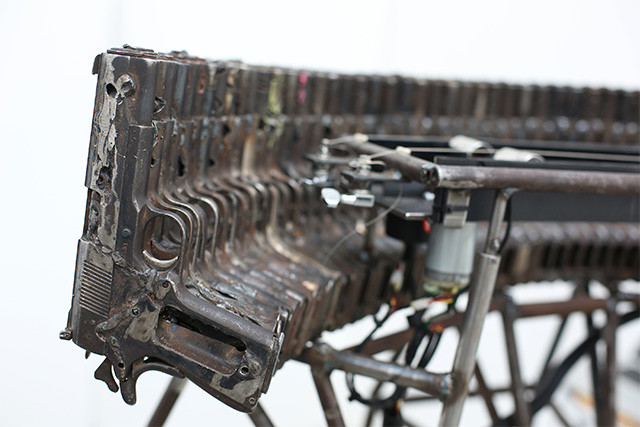 The concept of creating instruments from weapons is itself brilliant, but get this: These mechanical instruments made from pistols, rifles, and shotguns can actually be programmed and operated via computers, making them capable of performing concerts. You can see photos of Disarm over at Lisson Gallery in London where it debuted earlier this year; I’ve included a few of them here. Many of the Disarm instruments will also be on display at the Carnegie Museum of Art in Pittsburgh starting October 5, 2013. After the jump, I’m also including a video interview of Reyes that allows you to see some of the instruments in action. 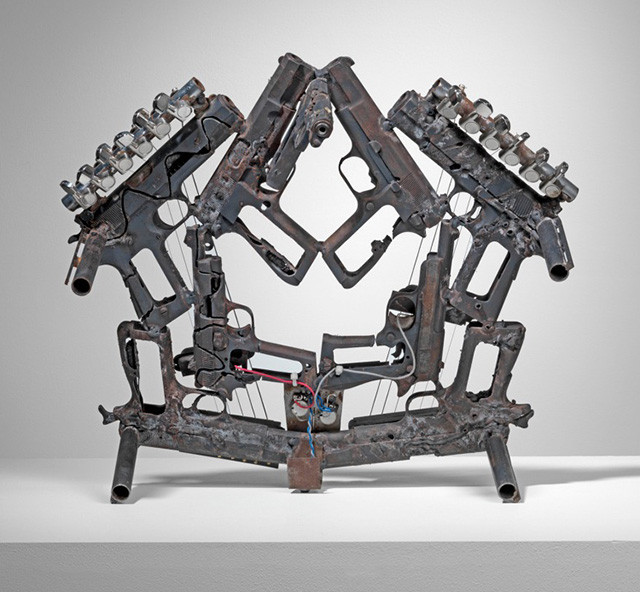 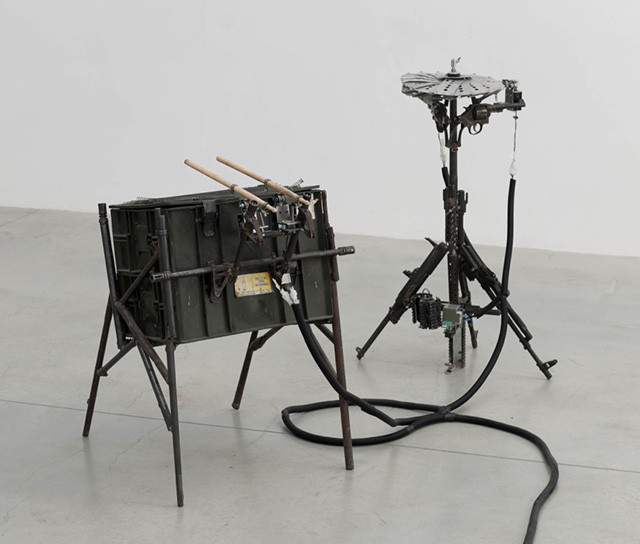 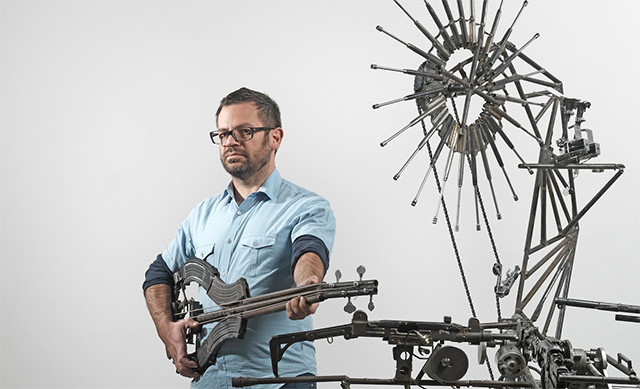 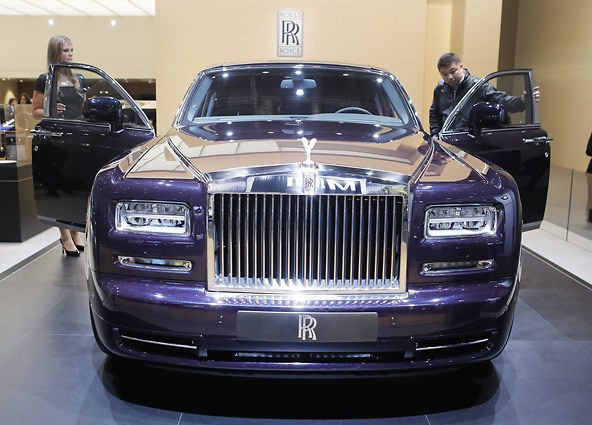 Speaking of metal works of art, let’s visit the 65th Frankfurt Auto Show, which is now in progress (running from September 10, 2013 to September 22, 2013). The photos I’ve seen show some stunning cars, most of them unfortunately far beyond the usual price points of your average consumer.

Many of the photos are also unintentionally amusing. For example, what the hell is that dude up there examining, in the presence of the magnificence that is the Rolls Royce Phantom Celestial? Must be the built-in door beer coozy. 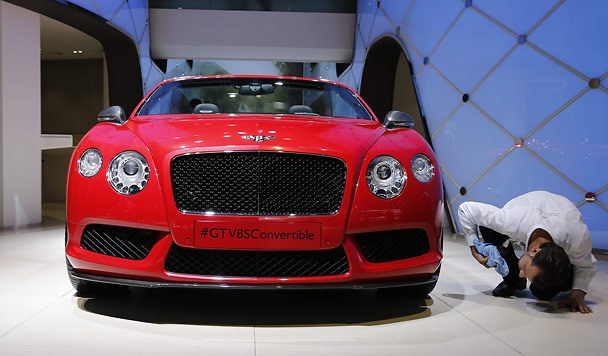 And what the hell is this guy checking out? I guess maybe brand new Bentley GTV8S Convertibles leak oil just like my 12-year-old Japanese ride. 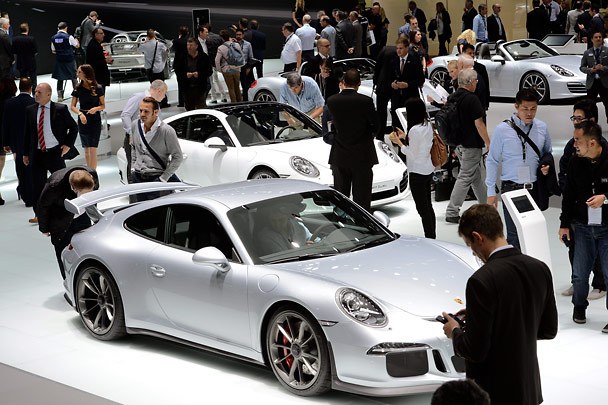 Are you beginning to notice a trend? Surrounded by all this automotive magnificence, all these people seem to be looking at everything but the cars. Except for that dude who’s scratching his head on that 911’s rear spoiler. If it were me, I’d be slack-jawed and slobbering in awe all over these beauties. 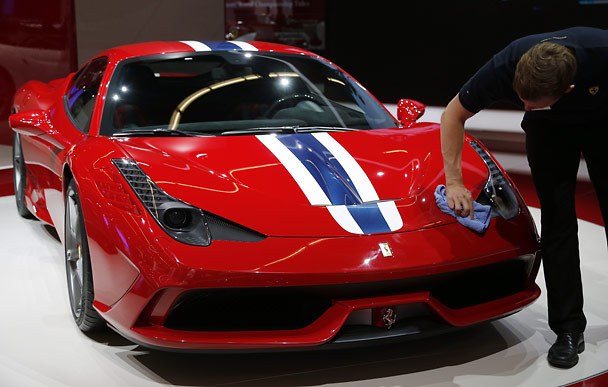 Okay, maybe someone actually did slobber on this Ferrari 458 Speciale. 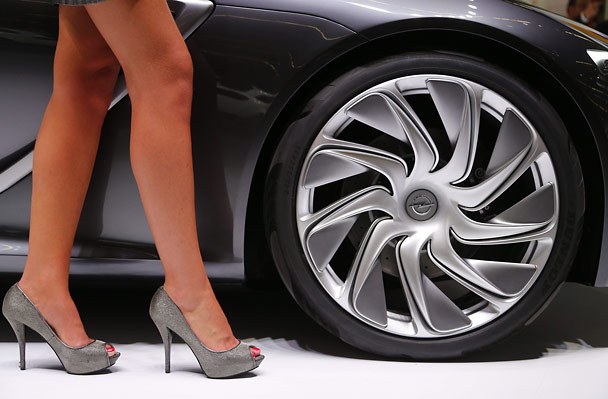 Get a load of those wheels! Hey, have you ever noticed that high-end car makers always feel it necessary at shows like this one to surround their hot models with hot models? You know, so that visitors will have something to stare at other than the cars?

I could understand if this were the 65th Frankfurt Toilet Show, but I’m not sure about the theory behind sexing up things that are fully sexed-up all by themselves. 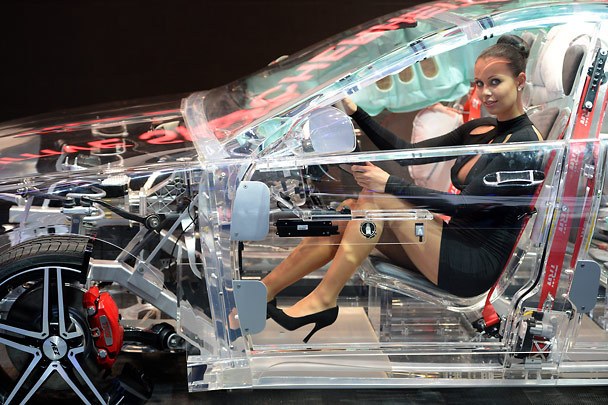 As I was saying.  She’s smiling because she’s not wearing her seatbelt and the cops haven’t pulled her over yet. 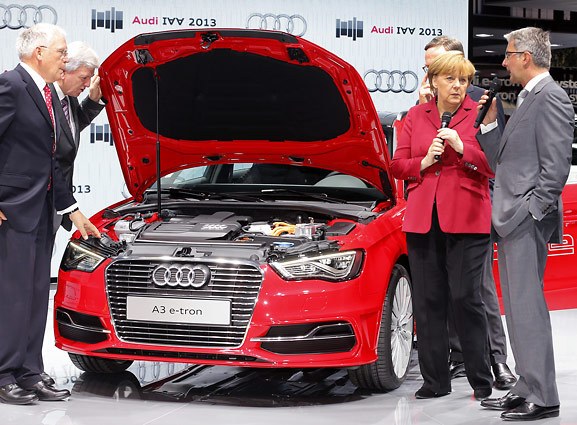 More people barely noticing an Audi A3 e-tron, including German Chancellor Angela Merkel, who looks like she’s thinking, “What the fuck am I doing here?”

I dunno, maybe people would have paid attention if this next item had been included in the Frankfurt show:

What you see above is the Kabutom RX-03. It’s a 17-ton, diesel-powered robotic bug that Japanese engineer named Hitoshi Takahashi spent 11 years creating. He told Fuji TV, “I said to my wife I was thinking about making a kabutomushi robot that you can ride. She said, ‘Oh, that sound interesting, so make it. You could probably ride it to take out the trash.'”

Oh, the loneliness of underappreciated genius!  More details and photos can be found here. (credit to DGR for the tip on this one) 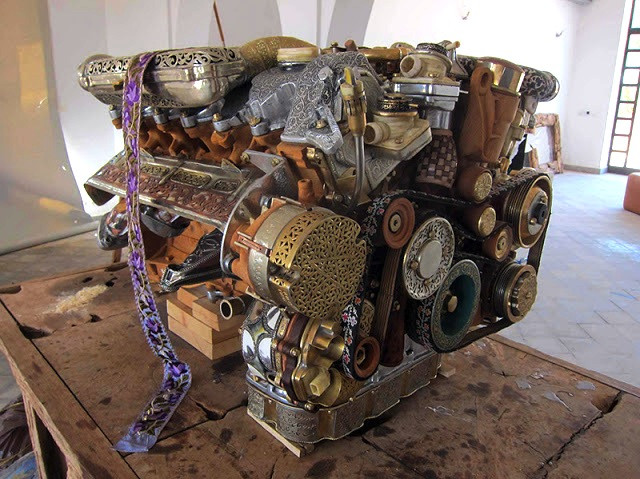 On a somewhat related note, what you’re looking at (via tywkiwdbi) is an “excruciatingly detailed Mercedes V12 engine built from 53 materials that were hand-forged from 35 master craftsmen from various regions in Morocco.”

It’s a piece of art called V12 Laraki created by Eric van Hove. He first dismantled a Mercedes engine. He then specified faithful reproductions of all 465 parts and 660 bolts, contracting with the Moroccan craftsmen to make them from a huge array of natural resources:

Okay, enough with the “mechanical” creations. Let’s turn to artwork created with bread. 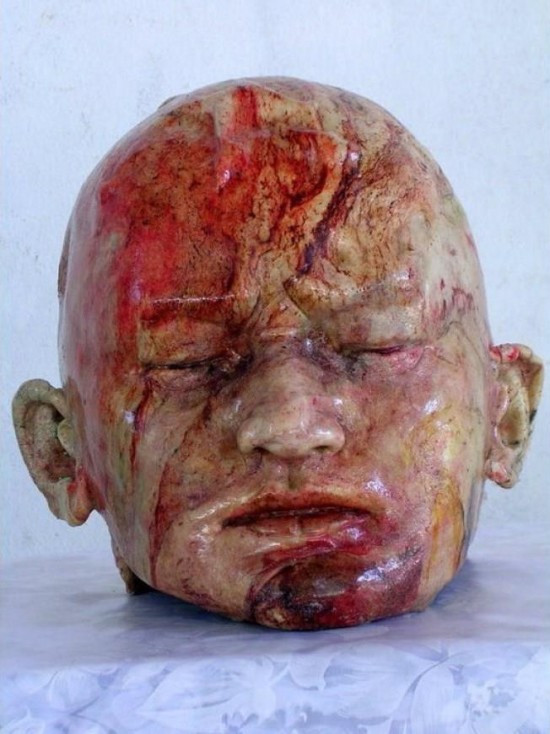 Kittiwat Unarrom is a Thai baker who makes corpse art out of bread and sells the edible pieces at his Body Bakery in Ratchaburi, Thailand. Wouldn’t these make lovely gifts? Can’t you just imagine cutting off slices to serve at your next family get-together, with butter and raspberry jam? Yum.

Here are more pics, with a video at the end. 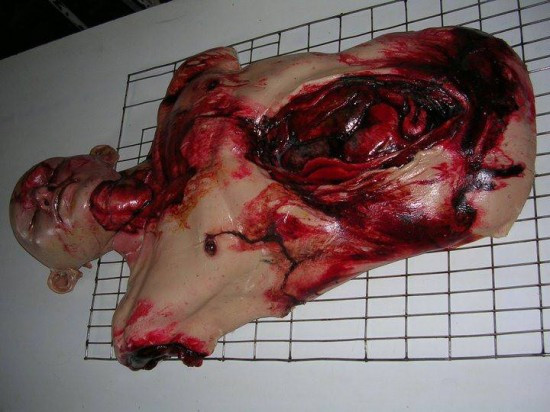 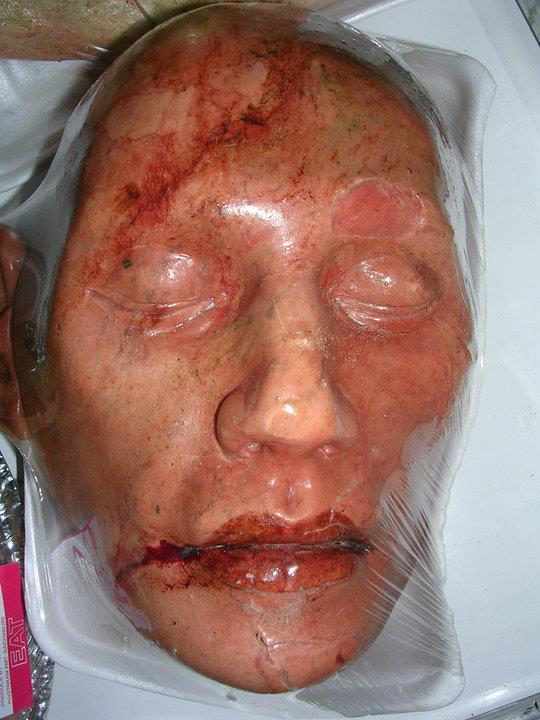 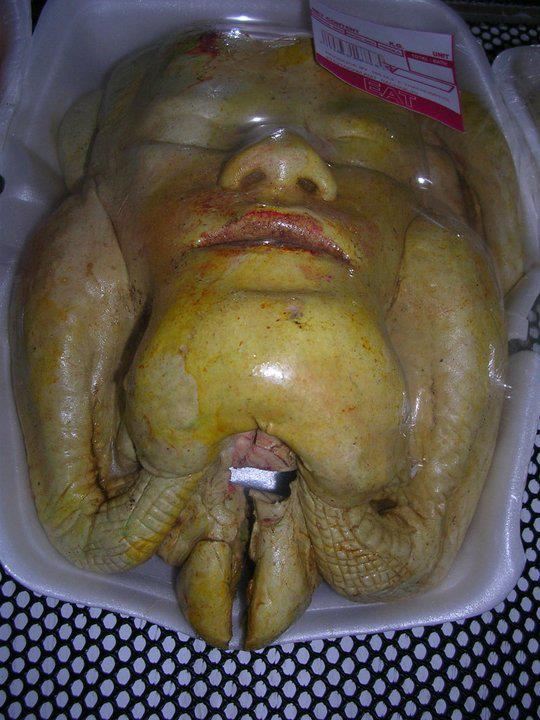 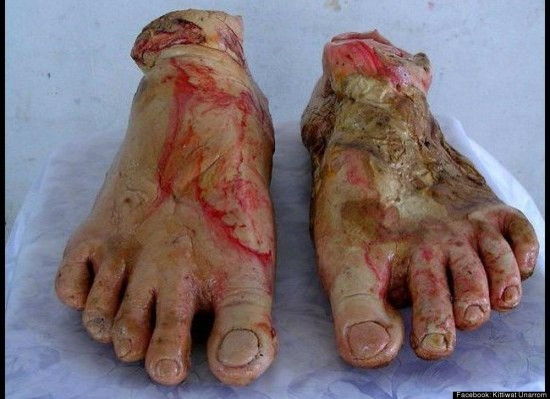 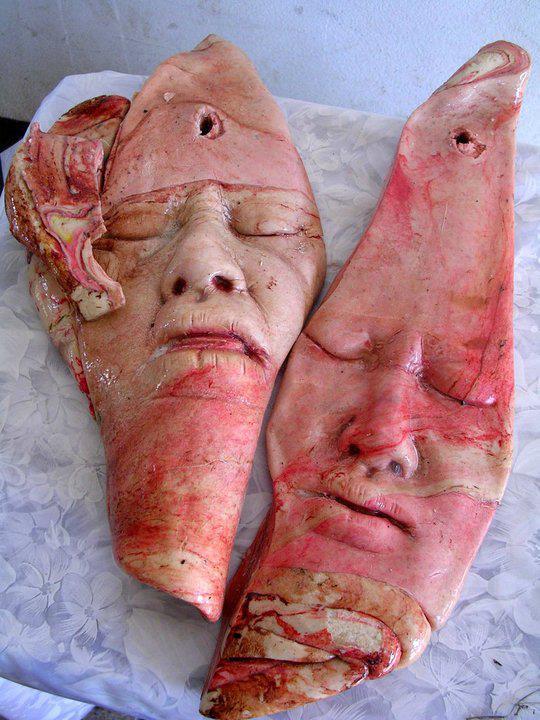 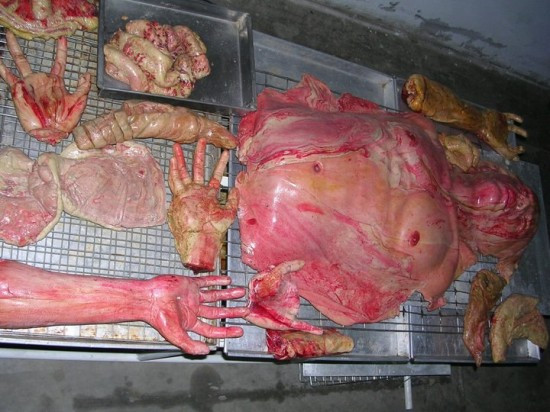 (via CVLT Nation — where you can see many more delicious pics.)

Shades of Cthulhu! Here’s a video of a giant octopus killing a shark. I don’t really have anything more to say about this, other than to recommend you watch it with the sound off. As one of the YouTube commenters said, “Any chance of putting the narrator in the tank?”

(thanks to Alexis for the link) 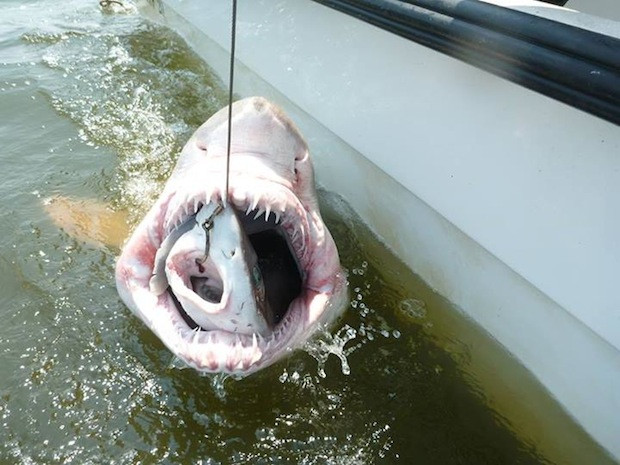 “Researchers at the University of Delaware set out recently in the hope of recapturing tagged sand tiger sharks. They enticed a large female but it was the bizarre manner by which they captured the predator that left them shaking their heads in disbelief.

Ah yes, the Hobbesian state of nature, the war of all against all, the shark turducken.

Now for some science news: 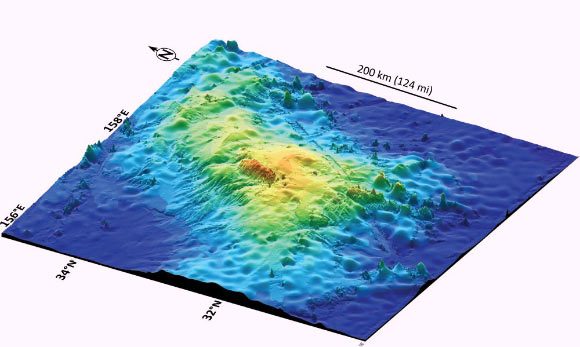 This might be a good way to pick up some extra change in a bar bet. Here’s the question: Can you name the largest volcano on Earth, including both active and extinct volcanos?

Until a week ago, the answer would have been Hawaii’s Mauna Loa. But as a result of a study published by geophysicist William Sager of the University of Houston (and reported here), the new answer is: The TAMU Masif.

That’s the name given to an extinct volcano located on the floor of the Pacific Ocean about 1,000 miles east of Japan. According to Sager:

“We knew it was big, but we had no idea it was one large volcano. Our final calculations have determined it is about 120,000 square miles in area, or about the size of the state of New Mexico, making it by far the largest ever discovered on Earth. It rivals in size some of the largest volcanoes in the solar system, such as Olympus Mons on Mars.”

It’s not nearly as tall as Olympus Mons, which is 16 miles high at its peak; TAMU Masif rises only a few miles above the seabed floor, though it has a gigantic footprint. Still, it’s considerably taller than even Mt Everest, as can be seen in this graphic. 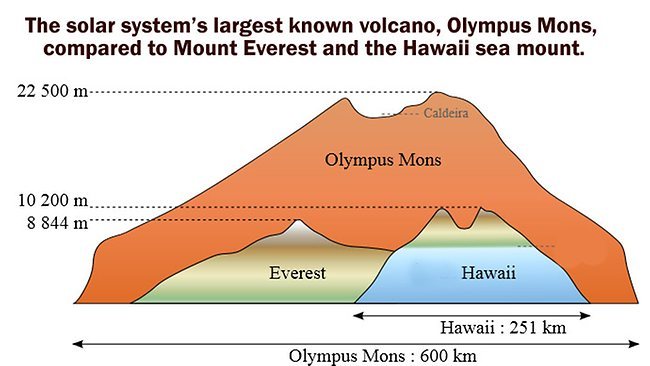 And that, my metal brethren and sistren, concludes this edition of THAT’S METAL!  As always, enjoy the rest of your fucking day.