The product of this arbitrary relationship between the signifier (“dog”) and the signified (the concept of dog-ness) is called the sign, which is the mental image that is conjured in a person’s mind when he or she sees the signifier and understands that it is referring to the signified, aka certain properties that constitute the thing-ness of something. 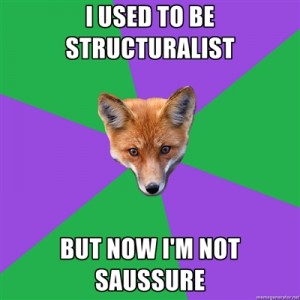 This is due to a phenomenon described by prototype semantics, which is a construct that postulates that some members of a category are more central than others in the same category. For example, while the mental image of an “ostrich” might be conjured in most Australians’ minds when they see the word “bird”, the mental image of a “penguin” might be conjured in the minds of most scientists working in Antarctica when they see the same word. So suppose I write this in a review of a Cannibal Corpse album:

“The meaty hooks will grab you by the right nostril and yank you into a gore-splattered butcher’s shop.”

The reference to specific band names, however, is much better at avoiding such wretched ambiguity. Regardless of which cultural background someone comes from, any reasonably well-informed, English-speaking reader who sees references to, say, the metal bands Death and Fleshgod Apocalypse knows for sure that the writer who made those references is referring to the sound of the music of a now-defunct American death metal band and the sound of the music of an active Italian symphonic technical death metal band, respectively. Suppose I write this in a review of a Cannibal Corpse album instead:

“A filthy marriage of Slayer and Autopsy, this record absolutely kills it.” 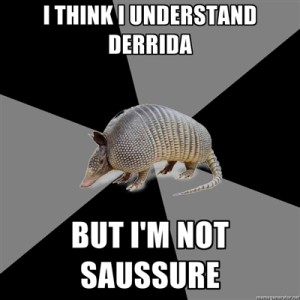 Whether or not you are a reader with an Arabic or British cultural background, as long as you have heard the music of Slayer or Autopsy before, upon seeing the word “Slayer” or “Autopsy”, the phenomenon described by prototype semantics is going to make your mind conjure the sign or mental image (which can be a particular album style, trademark chord progression, clothes that the band members wear, etc.) of either the band that we refer to as “Slayer” or the band that we refer to as “Autopsy”. So long as you are immersed in metal culture—and I’m assuming that just having listened to any metal band before imbues one with this quality—there is no way you could misconstrue the words “Slayer” and “Autopsy” to be referring to things other than the metal bands we call “Slayer” and “Autopsy”, and then conjure a mental image of something not related to the metal bands we call “Slayer” and “Autopsy”.

Of course, which particular album style or even chord progression that constitutes this sign or mental image conjured in the reader’s mind when he or she sees the word “Slayer” or “Autopsy” differs from individual to individual. But compared to the greater arbitrariness of metaphors that do not contain specific references to band names, the less arbitrary comparison of Band X to Band Y is more accurate in telling the reader how the particular album being reviewed might sound.

So in summary, comparing Band X to Band Y in music reviews is justifiable. But this reviewing technique only works the way it is described in this article based on three assumptions:

(1) The sole purpose of music reviews is to convey the sound of the piece of music being reviewed to readers as accurately as possible.

(2) The writer in question has already listened to Band Y and has strong reasons to believe that Band X is similar to Band Y in certain aspects.

(3) The postmodern notion that, after the conclusion of World War II, every piece of cultural output is essentially a product of recycled and repackaged ideas from the past. If not, it would be nonsensical to think that a particular band can be similar to another particular band in any aspect.

Making assumptions necessarily means making room for potential flaws in the argument presented here. And of course, since the argument here rests heavily on Saussurean semiotics, it is far from being watertight. After all, as with any other theory, Saussurean semiotics has its fair share of criticism, with a major one pointing out that the signified is actually just another signifier, because the interpretation of a signifier is always made through another signifier. But this is a topic for another day (and article).