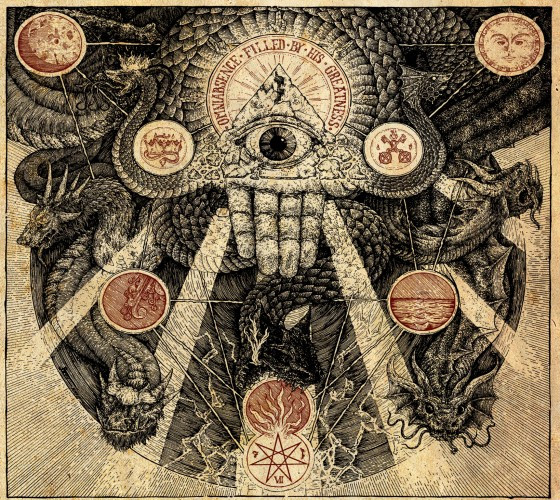 In this post I’ve collected three new songs from three new albums that caught my ears over the last 24 hours, as well as a full-album stream of another recent release. As you might have guessed from the title of the post, all of the music flies the black metal flag, but the styles are nevertheless significantly different from each other. The bands are Inferno (Czech Republic), Slegest (Norway), Darkmoon Warrior (Germany), and Patrons of the Rotting Gate (Ireland). I might add that all four albums are adorned by some very eye-catching artwork.

Inferno’s current album, their sixth, is entitled Omniabsence Filled By His Greatness and was released on September 24 by Agonia Records. The fantastic cover art that you see above was creatd by Fenomeno Design (Blut Aus Nord, Glorior Belli, Perdition). Yesterday Agonia uploaded one of the new tracks to Soundcloud.

“The Funeral of Existence” rings with chiming guitars and thrums with heavy weight in the low end. It rocks and rolls, its ephemeral melody will reverberate through your skull, and when the blasting and growling begins it will be time to run for cover before the roof comes down. Damned fine piece of progressive black metal, and really well-produced. This may well be a damned fine album, too — I now intend to find out. 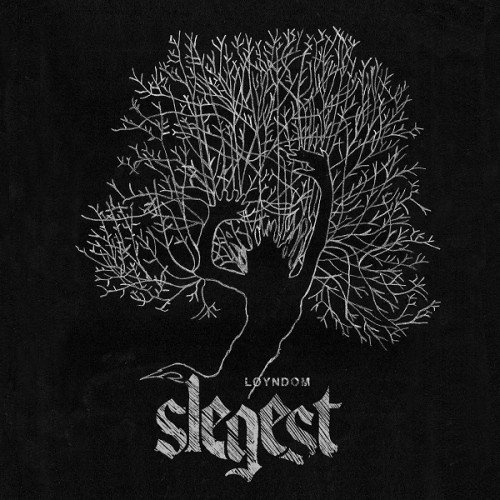 Slegest is the name of the solo project by former Vreid guitarist Ese. Slegest’s debut album Løyndom is scheduled for release on October 7 by Dark Essence Records, and today the label previewed the album’s opening track, “Ho Som Haustar Aleine”.

From the first few seconds I found my head moving up and down in sync with the compulsive rhythm of the song’s fat rockin’ riffs, while enjoying the bile-drenched vocal croaking and the bleak atmospherics of the melody. Definitely not standard black metal. Definitely interesting. Listen below. 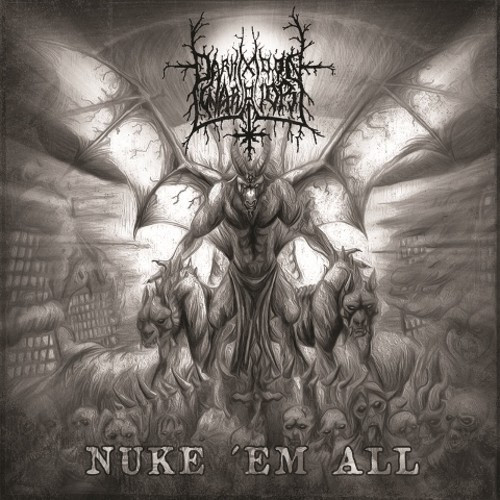 Darkmoon Warrior is a German band who have completed their third album after a five-year separation from their last one. The new full-length is named Nuke ‘Em All and it will be released November 11 by WTC Productions (World Terror Committee) on CD and LP. The advance track that premiered yesterday is named “Storm of Feces”.

I have to be honest: with an album title like Nuke ‘Em All and a song name like “Storm of Feces”, I was strongly predisposed to like the music — and I did after hearing it, too. Like some of the other songs featured in this post, it’s riff-driven and filthy-rock-oriented and a sure-fire headbang trigger. But the tortured growls, the menacing melody, the creepy guitar solo, and the interludes of blast-beats and guitar whirring still anchor the song in black metal territory. I like it. 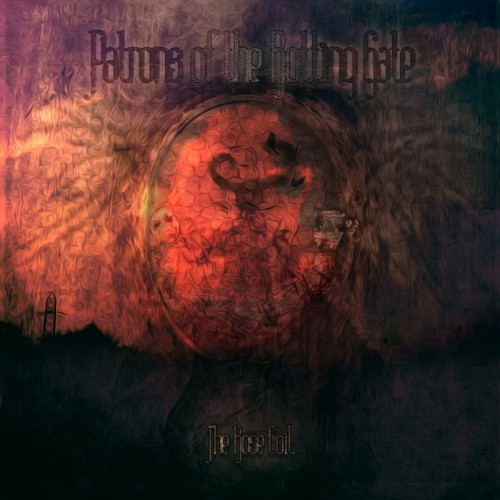 PATRONS OF THE ROTTING GATE

Patrons of the Rotting Gate is a one-man band from Belfast, Northern Ireland, who just self-released a debut album on Bandcamp entitled The Rose Coil. The one man is Andrew Miller, and when I say “one man band”, I’m really not kidding: He not only wrote the music, performed all the instruments, and provided the vocals, he also did the recording, mixing, and mastering — AND he created the artwork. I heard about the album not only from Mr. Miller but also from NCS supporter Vonlughlio, and since then I’ve also seen it mentioned favorably at other web sites, including Invisible Oranges.

Recently I’ve been kind of overwhelmed by the amount of new music I need to hear, and I’m afraid I may not manage a full, formal review of The Rose Coil. But I definitely did not want to ignore it entirely — because it’s really superb.

Unlike the songs in this post that preceded it, much of the music on The Rose Coil storms like sheets of wind-driven hail. But the music is far from one non-stop blackened blaster after another. The music is remarkably dynamic and progressive, displaying fluid, intricate guitar and bass performances and a tremendously ambitious approach to songwriting that succeeds tremendously. Definitely not cookie-cutter music, not by a long stretch.

Spiritually, Patrons of the Rotting Gate is a cousin of bands as diverse as Cormorant, Deathspell Omega, and Krallice, to name only a few who have been pushing the boundaries of black metal in interesting directions. Is it too soon to be including Patrons in such company? Listen for yourselves and make up your own minds, but I think it’s not too soon at all.

The album is a “name-your-price” download on Bandcamp, and you can check out the music below. Definitely do not miss the two “bonus” tracks, which appear in a separate player.

9 Responses to “SHADES OF BLACK: INFERNO, SLEGEST, DARKMOON WARRIOR, AND PATRONS OF THE ROTTING GATE”