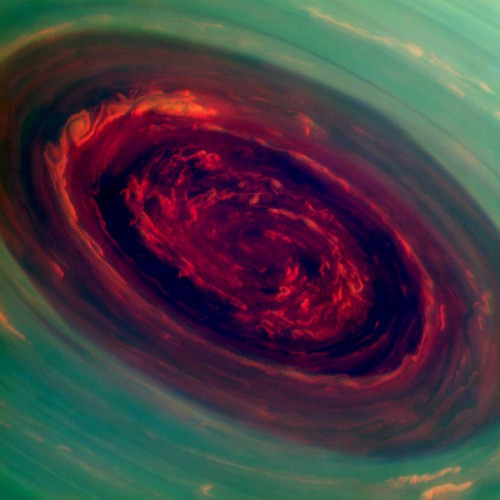 Welcome to another edition of THAT’S METAL!, in which we collect images, videos, and occasional news items that aren’t music but are nonetheless metal. We have nine items in this installment.

Let’s start with a couple of astronomical items. The first one (which is sort of an update to a December 2012 item) is staring at you from the top of this post. Nicknamed “The Rose”, it’s a photo of the eye of a gigantic spinning hurricane at the north pole of Saturn, taken by NASA’s Cassini spacecraft on Nov 27, 2012. The eye of this storm has been measured at a staggering 1,250 miles (2,000 kilometers) across. Two planets the size of Earth could fit within the hurricane as a whole.

When the Cassini spacecraft arrived in the Saturnian system in 2004, this pole of the planet was tilted away from the sun and in darkness. The last time Saturn’s north pole was photographed in sunlight was in 1981 via NASA’s Voyager 2 spacecraft, but at that time the observation geometry didn’t permit a detailed view of the poles, so this more recent imagery is a first.

Sadly, the colors in this photo are “false”, though they’re quite beautiful. Spectral filters sensitive to wavelengths of near-infrared light were used, with red indicating low clouds and green indicating high ones. More information is available in the following April 2013 video, as well as at this NASA web page.

By the way, on September 12, 2013, NASA announced that the Voyager 1 spacecraft, originally launched in 1977, has left the solar system (defined as passing beyond the fringes of the sun’s outward-flowing solar wind) and is now in the interstellar space between the stars — the first human object to go so far. And that’s fuckin’ metal, too. 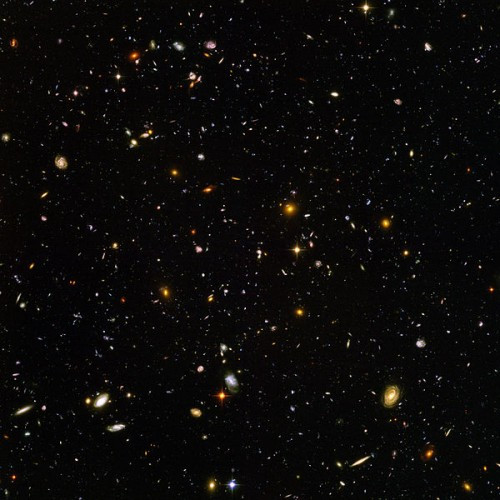 If that first item made you feel kind of tiny and insignificant, you ain’t seen nothin’ yet. This next video concerns what’s variously billed as “the most important image captured by the Hubble telescope” and “one of the most profound and humbling images in all of human history”: The Hubble Ultra-Deep Field. In truth, it’s not one image, but a composite of imagery data collected over a period of 11 days in 2009 while the telescope was trained on a tiny fragment of space that appeared to contain nothing at all — no planets, no stars, no galaxies.

To get a sense of how tiny the field of vision was, consider that it was smaller than a 1 mm by 1 mm square of paper held at 1 meter away — equal to roughly one thirteen-millionth of the total area of the sky. Yet what the images revealed in the study of this tiny portion of apparent void is mind-boggling.

The video’s narration is eloquent, though perhaps overly dramatic. Yet “humbling” is definitely the right word for what was discovered.

In 2012 NASA released a revised version of the Ultra-Deep Field image that’s been labeled the “Hubble eXtreme Deep Field”, compiling even more data and revealing an additional 5,500 galaxies. For more info, go here and here.

This is a photo of a scorpion and her children, found under a bed in Panama: 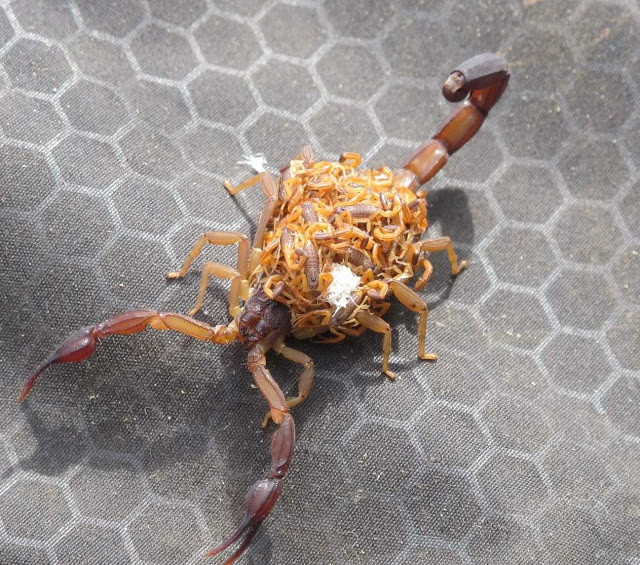 That’s really all I have to say about that. Well, other than . . . HOLY SHIT!

Since we’ve moved back from space into the weirdness of our own natural world, let’s have a look at this thing: 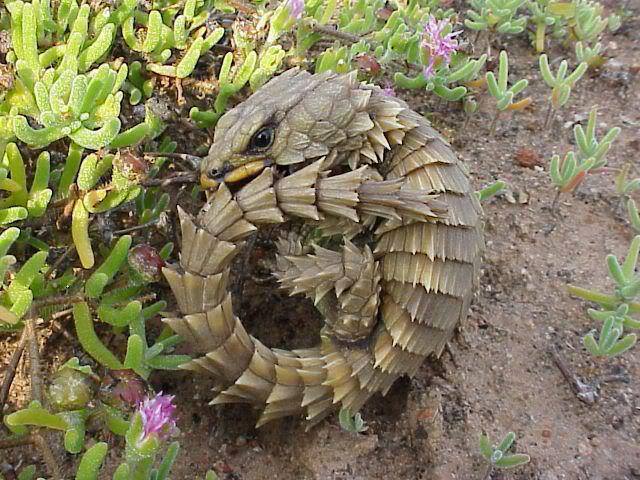 It looks like an artist’s conception of a character in some fantasy game, but it’s a photo of Ouroboros cataphractus, commonly known as the armadillo girdled lizard. It lives in the desert areas along the western coast of South Africa. As for where the Latin name for this creature comes from, here’s what The Font of All Human Knowledge has to say about its defensive behavior:

“The armadillo girdled lizard possesses an uncommon antipredator adaptation, in which it takes its tail in its mouth and rolls into a ball when frightened. In this shape, it is protected from predators by the thick, squarish scales along its back and the spines on its tail. This behavior, which resembles that of the mammalian armadillo, gives it its English common name.”

Speaking of the ouroboros, here’s another real-life example.  This must have been one really hungry snake.

(thanks to Dane Prokofiev for the tip about the armadillo lizard) 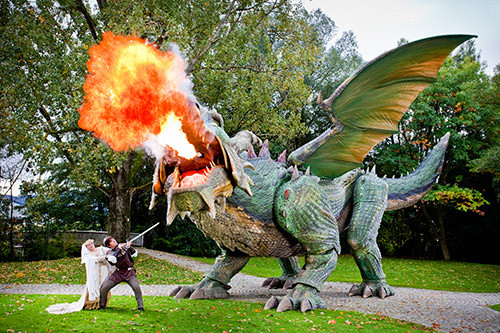 It’s all well and good to use technology for the construction of orbital observatories such as the Hubble telescope, but it’s important to celebrate important technological achievements here on Earth, too. Like the development and construction of a big fuckin’ mechatronic dragon.

“Tradinno” is the name of the world’s largest walking robot (a recognition awarded by the 2014 edition of the Guinness World Records). It’s 51 feet long, stands 30 feet tall, has a wingspan of 40 feet, and weighs 11 tons.  Of course, it spits fire.

One other oddity about this oddity: It was developed by Zollner Elektronik AG for use in what is reportedly the oldest German folk play, “Drachenstich”, as performed in the Bavarian town of Furth im Wald. Video below. (via Yahoo Games and a tip from Austin Weber) 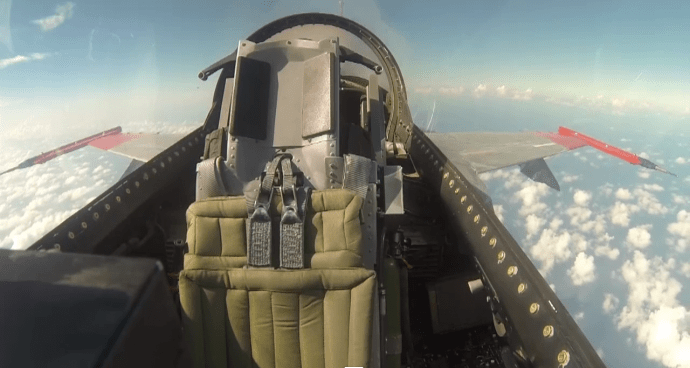 Speaking of robotics, what would you say if I told you that Boeing engineers had figured out a way for test pilots to fly an F-16 aircraft by remote control? I mean, it’s one thing for black ops joy-stick controllers to pilot armed stealth drones, but damn, this takes things to a whole ‘nother level.

The following Boeing video, released last week, shows the first test flight of an unmanned F-16 that had once been sitting mothballed in the desert. It took off from an airfield in Florida and flew over the Gulf of Mexico (would have been kind of scary for this to have happened over inhabited territory). It reached an altitude of 40,000 feet and speeds of Mach 1.47 (1,119 miles an hour) and it engaged in maneuvers that would have caused a human pilot to black out.

Get this: Boeing says these remote-controlled F-16s were developed for use as targets. Seems like a really expensive way to practice shooting things down. The offensive potential of this development seems more evident, and more intriguing.

(via MyNorthwest.com, following up on a FB status by Phro)

Now it’s time for boxes. First, I give you “Box”. That’s the name of a short film created by a San Francisco design and engineering studio named Bot & Dolly that specializes in automation, robotics, and filmmaking.As the creators explain:

“Box” explores the synthesis of real and digital space through projection-mapping on moving surfaces. The short film documents a live performance, captured entirely in camera. Bot & Dolly produced this work to serve as both an artistic statement and technical demonstration. It is the culmination of multiple technologies, including large scale robotics, projection mapping, and software engineering. We believe this methodology has tremendous potential to radically transform theatrical presentations, and define new genres of expression.

It is indeed quite cool (thanks to DGR for the tip about this one):

Here’s another box. Someone smoked a lot of weed before coming up with this concept. But I don’t understand why they called it “useless”.

I’ve saved what may be the best for last. This is a literal bird’s eye view of an eagle in flight above the Mer de Glace glacier and Montenvers Railway on the northern slopes of the Mont Blanc massif, in the French Alps. A Go-Pro camera was mounted to the bird’s back. Amazing.