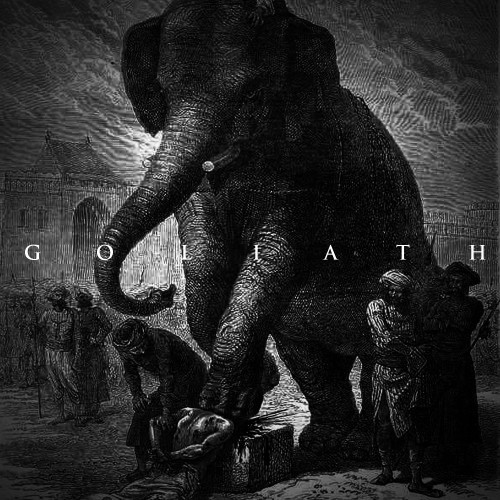 For the uninitiated, Imperial Triumphant are arguably one of the best new US black metal bands around. These New York City natives take a technically oriented approach to unorthodox black metal that is fueled by an unyielding desire to spread the anti-gospel.  Last year they released their debut album Abominamentvm, an impressive effort that distorted and contorted black metal in a unique way, deconstructing its tropes and showcasing audible bass playing, which is something that sadly is far too uncommon in black metal. A Deathspell Omega influence seems to be apparent, and yet their music also contains traces of old school black metal fury, occasional lumbering doominess, and unsettling psychedelic drone bursts, all of which do much to set them apart from being merely a product of one strain of influences.

The artwork is a good introduction and foil to Goliath‘s musical monstrosity. Your eyes are drawn immediately to a mammoth elephant, but as you look down you realize the beast has squashed a man’s head into a vicious oblivion of blood. That’s kind of how it feels to listen to this. Though Goliath is merely two songs, there’s a lot to immerse yourself in, as both are equally packed-to-the-brim, tour de force experiences. 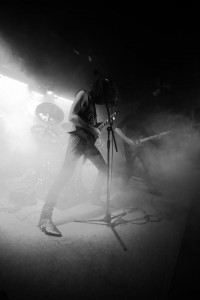 The first track, “Sodom”, begins with an upsetting orchestral intro that’s soon accompanied by unholy hymn-phrased growls, the song then shifting to a swarm of frenzied alien lead guitar playing and energetic drumming that rises into a blissful cacophony, strung out on a writhing atmosphere of buzzing discordance. It’s an outright blasphemous fury that veers into uncomfortable shrieks of inspired dissonance, aided toward the end by a guest Warr-guitar solo by Colin Marston.

Marston also recorded Goliath, as he did their previous efforts, and he makes the music here sound grimy yet still crisp in the best possible way. Instead of their usual drummer Alex Cohen of Pyrrhon, the band enlisted Kenny Grohowski (Secret Chiefs 3) to guest drum on “Sodom”. He does a stunning job and decimates his drum kit on this track in a raging inferno of towering blasts and frenzied fills.

Closing out Goliath is the second track “Gomorrah”, which opens with a hypnotic, bordering on psychedelic, passage accentuated by the ping-pong bounce of the bass rhythm. This temporary opening groove quickly dive bombs in a sudden descent into the chaotic sounds of apocalyptic blackness and unfathomable terrors. This hive of riffs and blastbeats soon collides with waves of buzzing drone and then returns to a faster passage that highlights the percussive insanity of Alex Cohen. Shortly after, the song slows to a lingering nasty crawl and then carefully re-builds with a slick bass groove amidst an uneasy drone that draws power from beastly roared vocals. The combined effect covers you in a tidal wave of sickness, washing over you with filth. Finally, another bizarre sounding pause sets the song off-kilter again until it re-ignites, only to then transition abruptly into the song’s outro — an echoing soundscape awash in phantasmagorical otherworldliness.

Imperial Triumphant have succeeded with Goliath in creating an even more dense and multi-faceted take on their signature sound. The two songs switch and swerve in and out of multiple tempos, with a twisting gnarled nature that moves from moments of machine-like intensity to sudden collapses into lurching decay and madness.

The total experience of taking in Goliath plays out like part horror score and then part real horror, a sickening scintillation of the surreal and the sadistic that together conjure an evocative glimpse into hell, where the laughing void of destruction howls in the wind of our fears. Imperial Triumphant harness a cold vibe of eerie misanthropy on Goliath that is both harrowing and powerful. The otherworldliness that they so effectively channel on Goliath is a macabre wonder and a testament to the band’s intriguing and still evolving style .

Goliath is out today and can be purchased via their Bandcamp page. Stream it below.