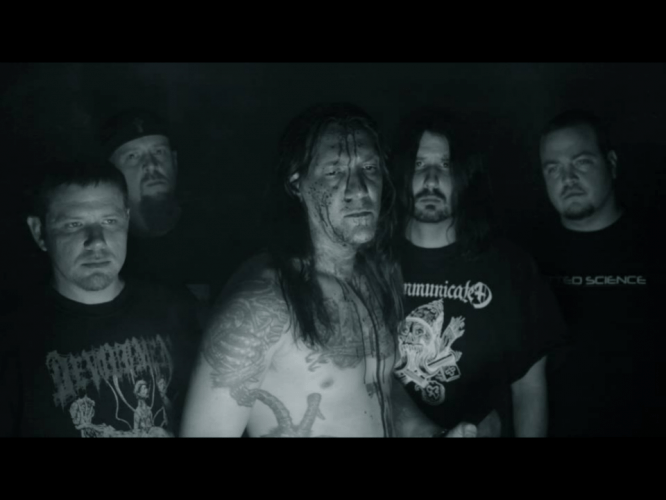 Most of today we were distracted by other things, and hence kind of light on the spotlighting of new music. Hell, even Andy Synn could only manage to write a three-line album review, though he did write three of them, and BadWolf was so distracted that he experienced temporary website confusion and wrote up a song premiere for someone else, though it was a really good write-up for a really hot song. I put up photos of calcified birds and bats.  Just one of those fuckin’ days.

We’ll try to do better tomorrow. But I thought before I completely checked out for the day I’d throw one piece of audio-visual sweetness your way.

Take a pit-bull guard-dog that hasn’t been fed in a week and then taunt him until he’s barking and ready to tear your throat out. Add a full-throttle headless drummer wearing a Blotted Science shirt (high fives for that!). Throw in a couple of mutant guitarists and a bassist with super-animated fingers. Set all of them on fire and tell them you won’t put it out until they finish their song, and then stand way back and let them GO!

And you’ll have “Carcinoma Contagion” by Louisiana’s Suture. The song will appear on a re-recorded version of the band’s 2002 debut album Carnivorous Urge To Kill, which is pretty much what I was feeling as I listened to this song. (The album will be released October 29 by Comatose Music.)

Or, you could try to do a gene-splicing of Suffocation, Devourment, and Cannibal Corpse, but who’s got time to wait for that to grow in the nutrient vats of the cloning tanks? It’s easier just to watch and listen to this very well-executed piece of blowtorch technical brutality. It will knock your damned teeth out.