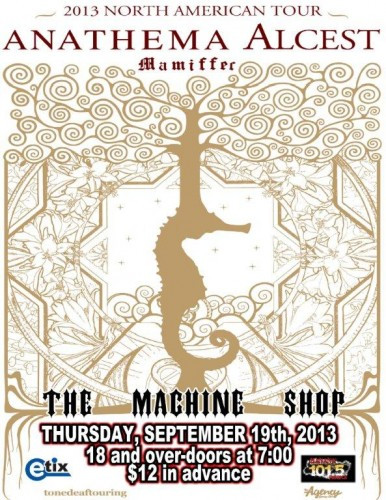 (BadWolf reviews the live performances by Anathema, Alcest, and Mamiffer in Flint, Michigan, on September 19.  Photos from the show, which follow the review, were taken by Kyle Lee Tate.)

Metal is rarely beautiful music. Many people, myself included, come to it looking for something harder, ugly—a mirror to hold up to those feelings not accepted by the mainstream society day-to-day. But some bands do take metal and make something beautiful out of it. Gorgeousness is likewise shunned by the worker bees of the modern day (have you ever seen a modern apartment complex? Or a piece of IKEA furniture?).

I rolled into Flint Michigan’s legendary metal venue The Machine Shop with photographer Kyle Lee Tate, to find Mamiffer already playing, bathed in stage-smoke and dim, red light. Mamiffer is a collaborate effort between Aaron Turner, the one-time creative force behind legendary post-metal act Isis, and wife Faith Coloccia. Together they make ambient metal with Turner on guitar-and-pedal-board, and Faith on vocals and keyboard. Their music is akin to the sound propagated by the Handmade Birds record label, and popularized by Horseback and Locrian (with whom Mamiffer have collaborated).

Live, Turner and Coloccia wound a fair amount of variety into their short, drone-y set. Turner used a violin bow to get some symphonic textures a-la Jimmy Page. Later, Coloccia abandoned her keyboard in favor of two handheld electronic devices I am unfamiliar with. I couldn’t take a two-hour set of their music, but the couple set the tone for the night with aplomb.

Alcest took the stage to thunderous applause. The band’s mixture of early-90’s shoegaze with atmospheric black metal has been racking up critical acclaim and a hungry fan base. It truly is beautiful metal—their work reminds me more of Monet’s Water Lillies than of listening to Burzum. Singer/guitarist Neige used mostly clean vocals (which sound much crisper than his harsh singing), backed up by a surprisingly large amount of sampled strings, synths, and backup vocals. Drummer Winterhalter (ex-Peste Noir, currently in Les Discrets) impressed me most—he tosses in enough subtle fills and sweep-stick techniques so that the minimal drumming in Alcest’s music felt fresh and engaging.

The band’s set leaned heavily on newer material, opening with “Autre Temps,” and played through half of the numbers off 2012’s Les Voyages de L’Âme, with only one song each from Écailles de Lune and Souvenirs d’un autre monde. Alcest did play two tracks from their upcoming album, Shelter, which sounded even more biased toward the shoegaze sound and less toward black metal. The new work is brighter, with a jinglier guitar tone, but still sounds like part of the Alcest lineage, with a few new experiments thrown in—“Opale” in particular featured two huge vocal-and-synth breaks wherein the live members of Alcest did nothing at all, and Neige’s backing tracks conjured huge, bright, emotional sounds. It was the only awkward bit live, but as long as Neige has his hands on his guitar, Alcest slay. In a way, I was reminded of both Covnerge and Swans: all three bands whip their audiences into one big, sopping, cathartic mass. When Neige left the set, I felt lighter, and my life felt enriched, which is precisely what someone into this kind of music wants from it.

But nothing prepared me for Anathema’s performance. Anathema once upon a time produced gothic doom metal as part of the lauded “Peaceville Three,” a trio of similar-sounding bands that pioneered a serious, moody brand of death-doom for (of course) Peaceville Records in the early 90’s—Anathema’s kin in this included Paradise Lost and My Dying Bride. Like Paradise Lost, as well as Katatonia and, more recently, Opeth, Anathema have pretty much abandoned metal altogether. Led by the brothers Vincent and Daniel Cavanagh, singer/guitarists each, the band’s recent work is a mix of anthemic pop and progressive rock in the vein of Porcupine Tree or The Pineapple Thief. Also like Paradise Lost, the Cavanagh brothers have achieved some degree of mainstream rock stardom in Europe, but not in America.

This was their first US tour in 20 years. I had no idea what to expect—in college, I briefly delved into the band’s newer material, and quite liked the albums Judgment and Alternative 4, then just stopped listening. That was a mistake on my part—Anathema put on one of the best rock shows I’ve seen all year.

With a setlist culled mostly from their two latest albums, Anathema stormed the stage as an absolute image of professionalism. The Cavanagh brothers looked like a million bucks (Vincent is a dead ringer for Benedict Cumberbatch, by the way) and spun around the stage with their guitars firmly in hand. Every musical note was pitch-perfect and on time; Daniel Cardoso, who has spent more time as the group’s keyboardist, smoked his drum kit like a guitar; the man can pop a snare drum so it sounds like a landmine. Female vocalist Lee Douglas—who tore up heartstrings on tracks like “A Natural Disaster”— sang with the kind of scholarly grace that remains absent from most metal shows, outside of cheesy power metal.

Their fans—a surprisingly large crowd of them—ate it up, singing along word for word to most songs. I’m used to feeling like the only real fan in the room, the lone banging head in a sea of crossed arms, but Anathema’s fans made me feel like an absolute tool. After this show, I’ve decided to join their ranks. Anathema responded in kind, with warm and witty stage banter and a real air of gratitude so often absent from touring musicians. One fan couple held up a handmade sign reading “Please play ‘One Last Goodbye,’ we love you.” That song, a deep-cut ballad from the Judgment album, was not on the set list, but at the end, the band decided to play it, heretofore unrehearsed—it was, according to my research, the first time Cardoso had ever drummed the song. The whole band stuck the landing. Hopefully it won’t be another two-decade wait to see them again. 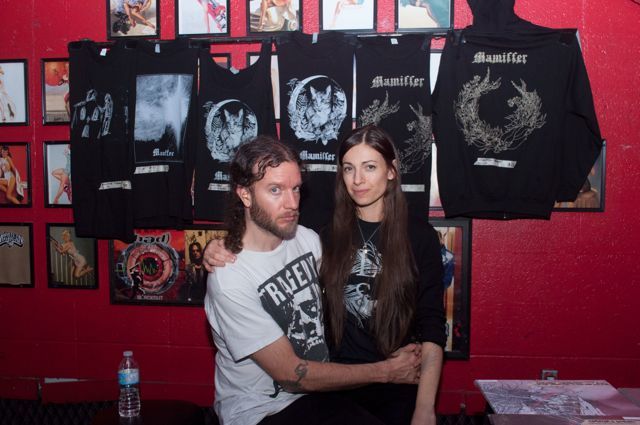 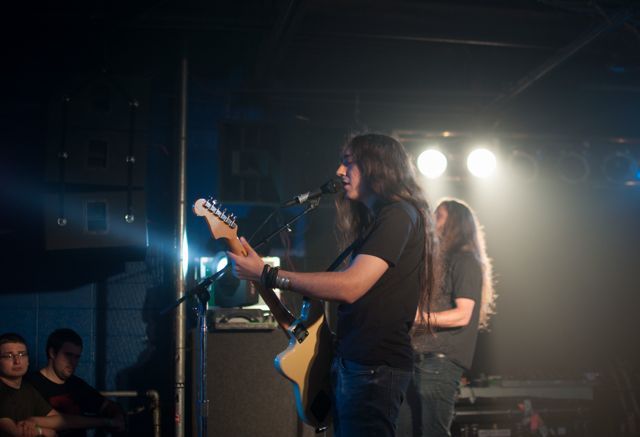 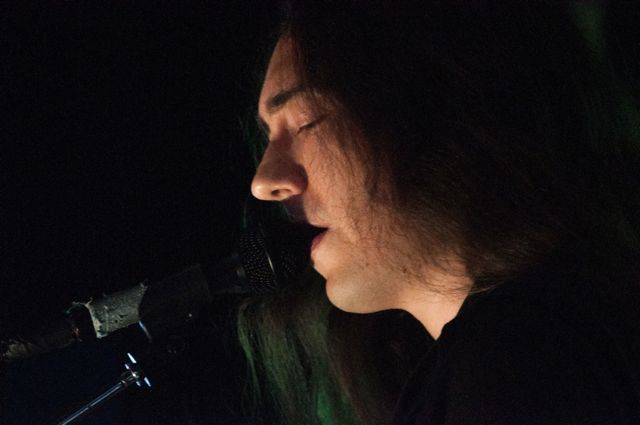 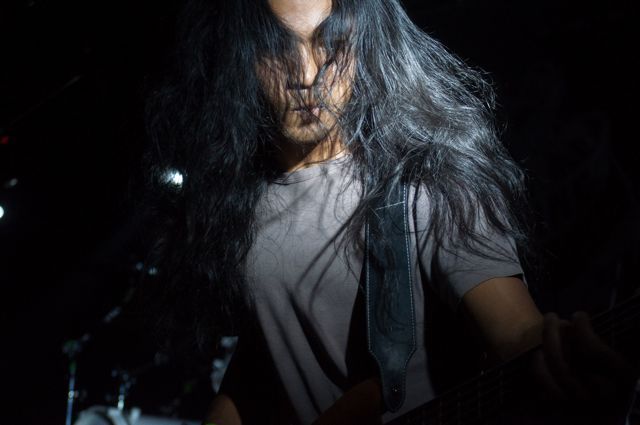 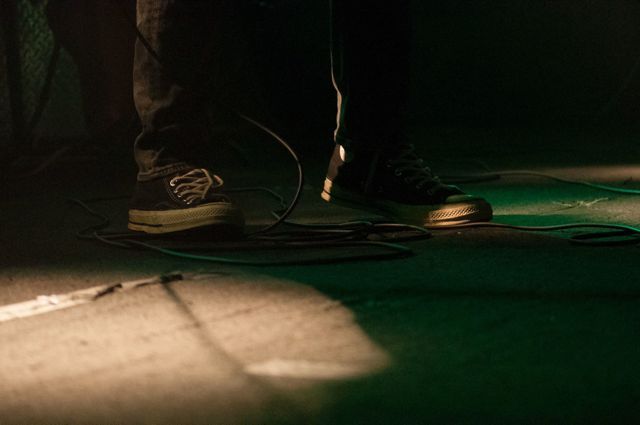 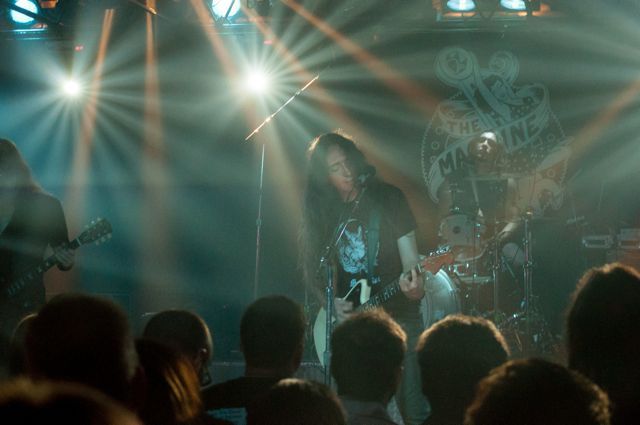 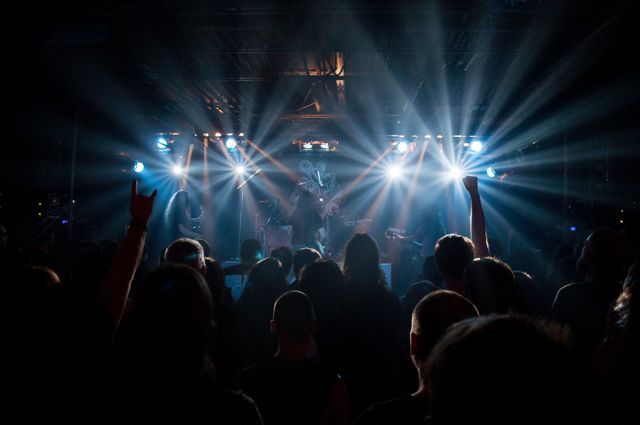 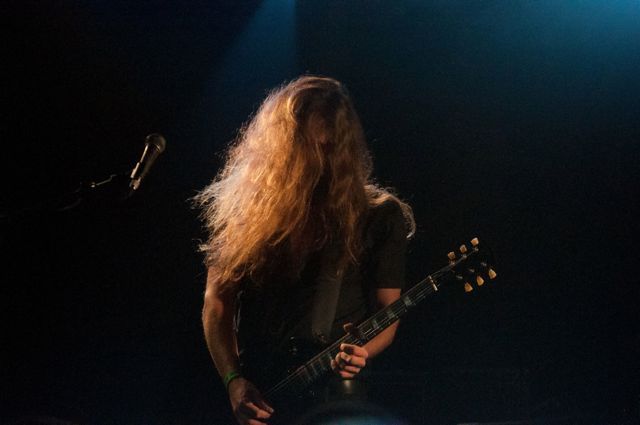 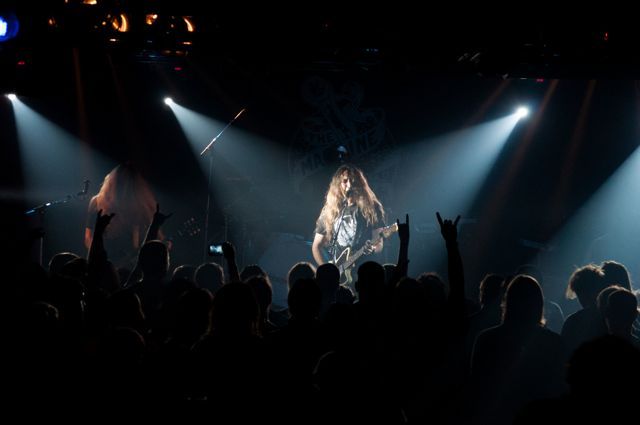 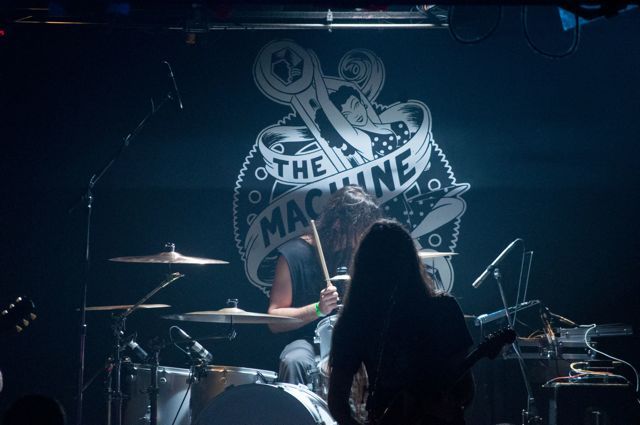 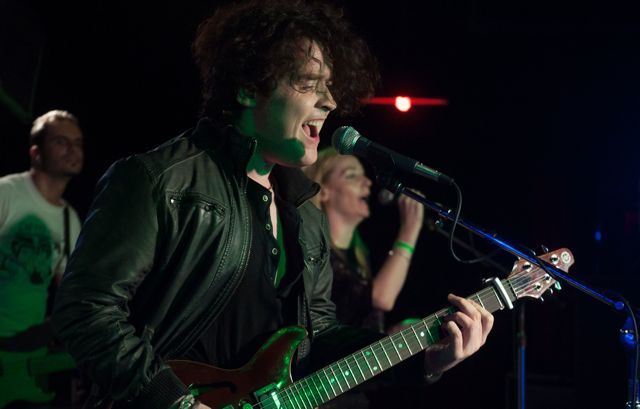 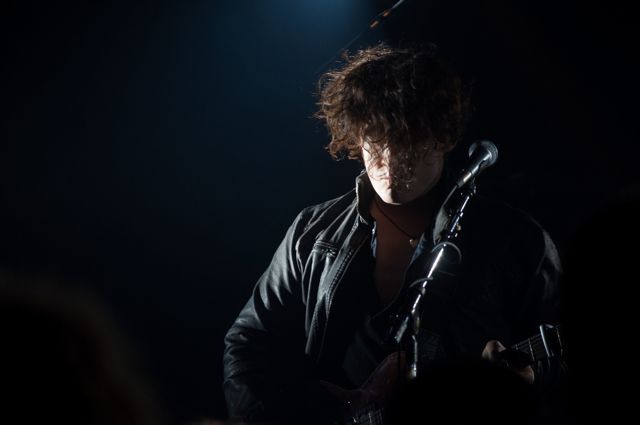 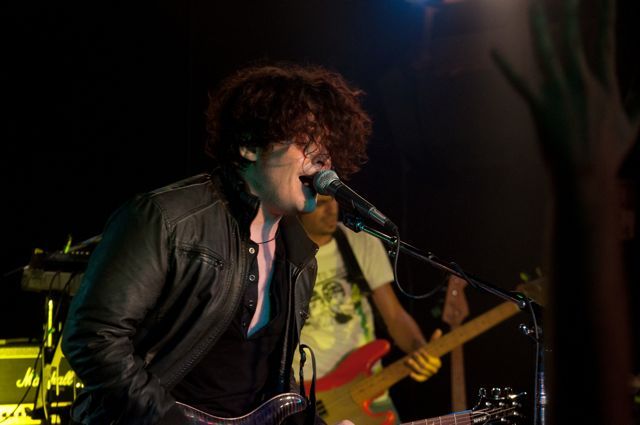 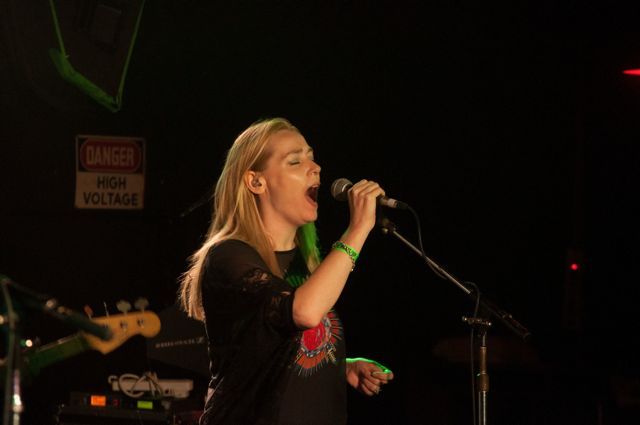 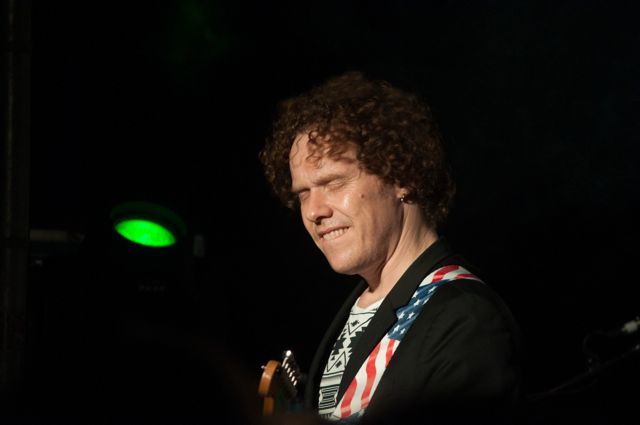 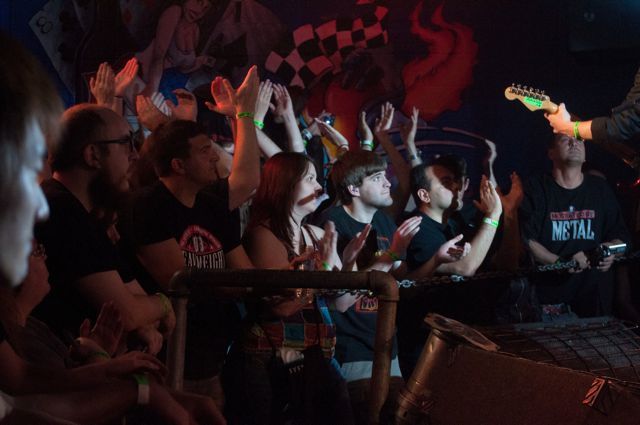 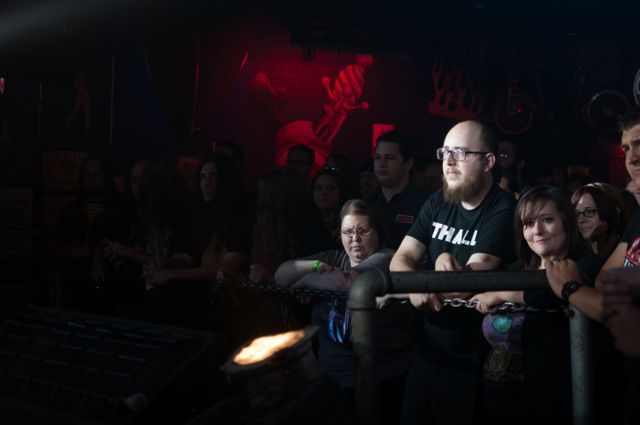