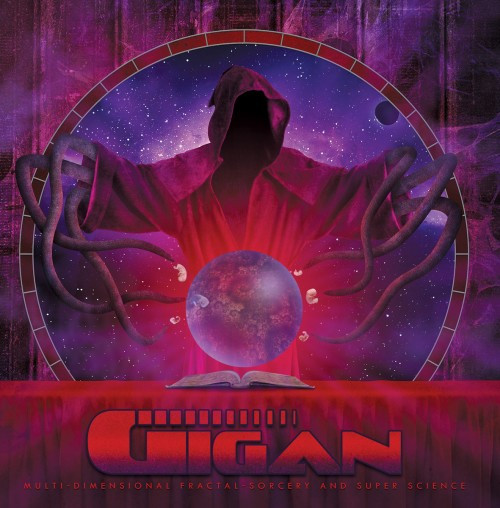 (In this post Austin Weber reviews the new album by Chicago’s Gigan.  A full-album stream follows the review.)

Since Gigan’s inception in 2006, formed by Eric Hersemann upon his exit from Hate Eternal, the band has survived and evolved despite a number of lineup shifts that would have ended most bands. After their excellent 2011 release Quasi-Hallucinogenic Sonic Landscapes, both drummer Keseva “Kaish” Doane and vocalist John Collett left sometime in 2012, though I was unaware of their departures until songs from this record premiered and a new band photo surfaced. Now Gigan is a Chicago-based group, by way of bandleader and composer Hersemann moving to the Windy City. He is now joined by new New York vocalist Eston Browne (Humanity Falls) and drummer Nate Cotton, who had played live for Gigan back in 2009-2010. With this new line-up, Gigan deliver to us a colossal emanation from another realm, entitled Multi-Dimensional Fractal Sorcery And Super Science.

When I listen to Gigan I often think of them as a better, more creative Hate Eternal (sorry Erik Rutan!). This album, while having a stronger atmospheric and synth-laced gravitas, is a labyrinth of destructive percussion and frenzied guitar-work that build in collaboration to monstrous heights of hyper-blasting, ever-shifting insanity. They’ve always been one of the most unique and truly alien-sounding technical death metal bands, their aggressiveness rounded out with a heavy dose of drawn-out atmosphere, oddball riffs, genuinely psychedelic and trance-like moments, and a chaotic nature rooted in the shifting between these different sounds that makes the music a uniquely unhinged, unpredictable experience. 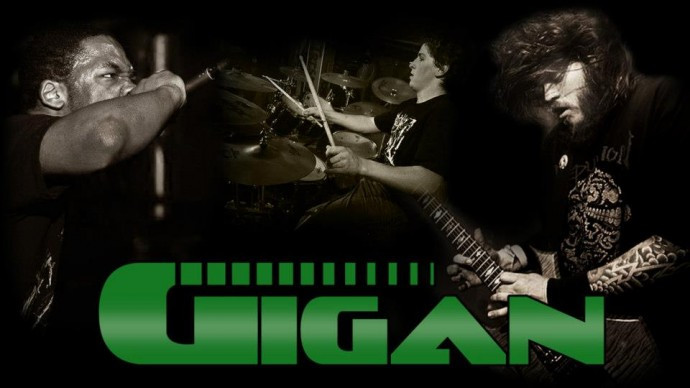 Much like the last album, this one begins with the record’s longest track, an atmospherically sprawling opus that is deceptively titled “Beneath The Sea Of Tranquility”. This song is an epic death metal fury that collides strangely with a harsh buzzing tide of synths and noisy sounds swirling in the background. The song builds up from a ghostly, empty, interstellar awakening until all hell breaks loose in a barrage of rapidly alternating rabid and looping riffs and demented drumming, which then re-routes to the earlier thicket of strange atmospheric waves.

Just when you think that’s how the song is ending, in typical Gigan fashion, the song turns in a new, faster direction until continuing to flip back to slower psychedelic parts every so often, just to fuck with you. This kind of trickery is all too common here, as Gigan choose to mess with our preconceived notions of song structure and song dynamics. The chaotic frenzy of their frequent shifts and the ways in which they combine the multi-faceted elements of their sound make the album constantly surprising.

The first song is a very good indicator of the evolutionary path Gigan have followed on this album. The song still sees them playing their unique version of technical death metal, and yet it ups the presence of the unsettling atmospheric parts and psychedelic peaks that have always been a staple of their sound. From their Footsteps Of Gigan EP forward, they have always been good at using synths, and some of the guitar-work too, to create those moments, but this record enhances those aspects of their sound; the music takes on an even more out-there vibe that transports the listener more wholly to unknown dimensions and horrifying situations. By combining this even more pronounced atmospheric approach with a more organic production, the result is a new height of simultaneous unease and trippiness.

When the first two songs dropped online before I got my promo, I liked what I heard but my ears had to adjust to the difference in production. It’s grittier and more distorted, a departure from the crystal clear mixes of their prior efforts, and yet it increases the appeal of the record while distinguishing it from its predecessors. Gigan are fond of splicing the sounds of cosmic annihilation and psychedelic deception in disturbing and beautiful ways. Most tracks feel like a trap;  you are lured in, made to feel like things will be okay while you’re tripping balls, and then in the end the music destroys you.

Beyond the usual guitar, bass, and synth performances of Eric Hersemann (and on previous albums, also xylophone and theremin), which make up the core of Gigan’s sound, his two new cohorts each bring something new to the table. New vocalist Eston Browne, of the excellent death metal band Humanity Falls, possesses both a sickening scream and very deep growls while pulling off a nice variety of fast and slow vocal patterns. His performance is so enjoyable in part because his vocals are recorded with virtually no effects, in stark contrast to John Collett’s performance on the last record. On their last album, they detracted from the aggressive bite of the vocals’ intensity (and no, I’m not talking about the robot vocal effect — I do like when Gigan do that).

New drummer Nate Cotton, who also drums with Bedlam Of Cacophony, manages to adeptly fill the big shoes left by Kesava Doane and his inhuman performance on Gigan’s last record. In keeping with the rest of the production, the drums sound more organic than on their last album.

Slowly but surely, as Gigan’s multi-dimensional approach has unfurled, they have stepped further and further away from making music that fits within the framework that most people usually think of with the term technical death metal, especially on this new album. Beyond the widened atmospheric scope, Gigan have remained committed to laying down some of the fastest and most frenetic death metal you will ever hear. Track two, “Influence Through Ritualistic Projection”, is a great example of that. It contains a lethal headbanging groove that starts at the 1:47 mark and  re-occurs in devastating fashion, introducing a new kind of heaviness into Gigan’s sonic arsenal. A similar groovy outburst also shows up in the opening of “Cosmic Triangular Communications”, giving the song a headbangable pulse that resurfaces throughout, with the help of spacey synths and cryptic astral motifs aligned with blastbeats. Alas. the madness must end, and the song hollows out into a harrowing hall of synth.

Closer “Bio-Engineered Molecular Abnormalities” likewise features a sickening groove fighting for space amidst the current for the first half until a frenetic mass of blasts and blazing-fast riffs rises up, until the album fades out in a sea of static and hypnotism.

Gigan have always focused their minds on creating their own strange sonic universe, and Multi-Dimensional Fractal Sorcery And Super Science is their most engrossing attempt yet to convey such alien sounds, foreign dimensions, and assault by forms of unknown horror attempting to snuff out your existence with vitriol. Much like the California band Journal, Gigan’s music is very evocative of the concepts and ideas that dwell at the heart of their inspiration. This quality gives Gigan’s music a deeper purpose beyond aggression and technicality, imbuing it with a rich sense of immersive storytelling. With this album Gigan have set a high benchmark, not only for themselves but also for the death metal scene as a whole.

A Stereokiller.com full album stream is embedded below, or can be accessed via the following link. Multi- Dimensional Fractal Sorcery And Super Science comes out October 15th on Willowtip Records.