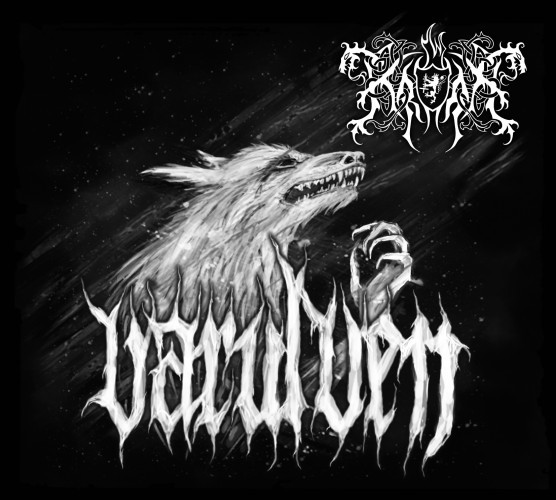 The last album released by the Ukrainian band Kroda was last year’s Live Under Hexenhammer: Heil Ragnarok!. As the name suggests, it was a live recording, and an excellent one. The band’s last studio release was Schwarzpfad from 2011 (reviewed here), which I thought was one of the best albums of that year in any genre. Almost all of Kroda’s releases are now available on Bandcamp.

Last Friday, a new Kroda EP appeared on Bandcamp under the name Varulven. It’s currently available as a “name your own price” digital-only download, though it’s planned for release on CD next month via Purity Through Fire. Varulven is a compilation of four tracks recorded at various times over the last five years. Die-hard fans of the band will be interested in this even if only to complete their collection of Kroda’s discography, but it’s really very good in its own right.

The title track is a studio recording from 2011. It’s a cover of a traditional Nordic song (the name of which means “Werewolf”), and the band describe it as “an experiment in viking-rock style music”. On this track, Kroda weave together elements of folk music (complete with the sounds of a ghostly flute, tumbling drums, and pure female vocals) and pagan metal (jagged growls, slightly distorted riffs and arpeggios, and tremolo-picked guitar melody), setting them to a rock beat. The melody itself, though quite catchy, has a dark undercurrent, which Kroda enhance with the sound of owls, wolves, and sinister whispering, turning it into something that’s haunting.

The EP follows “Varulven” with another lycanthropic song, this one entitled “Werwolf”, which was recorded in 2008. Kroda describe it as “a kind of tribute to Temnozor“, a Russian pagan-metal/folk band with whom Kroda toured in 2009. Temnozor recorded a song named “Werewolf” on their 2003 album Horizons…. Kroda’s cover is a whirling up-tempo romp that prominently features flute and an active bass line and again mixes clean voices with savage growls. It’s a toe-tapper and a head-nodder.

The third purely instrumental track, “Nemesis”, was also recorded in 2008 and is described by the band as a cover of a traditional German song. A double-tracked flute again carries the melody, accompanied for most of the song by bass, drum, acoustic guitar, and keyboard. Near the end, the song also includes a beautiful, clean, electric guitar solo. It’s a sombre, melancholy piece that’s quite entrancing.

The final song is yet another cover — a version of “Der Scharlachrote Tod” (“The Red Death”), originally recorded by the German band Absurd on their 2003 album Totenlieder. This track was recorded live in 2012 during the Kilkim Žaibu festival in Lithuania. Another live recording of the song (performed in Moscow) appears on Live Under Hexenhammer, and unlike that one, this one wasn’t professionally recorded. The sound is rough, unbalanced, and distorted like a bootleg, but you may find yourself headbanging nonetheless because it thrashes and rocks fuckin’ hard. The insane, vein-bursting yells at the end also come through loud and clear.

While we wait for Kroda’s next offering of original music, Varulven is an interesting and enjoyable interlude that focuses more exclusively on the folk elements of the band’s musical personality. To download Varulven, go HERE. Stream it below.