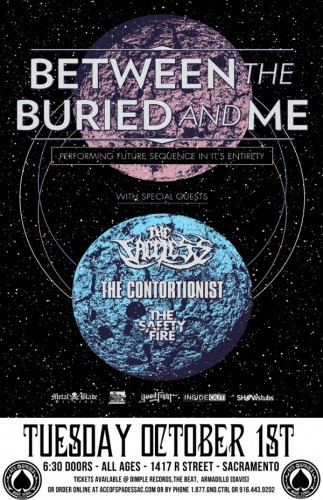 (DGR took in the live performances of Between the Buried and Me, The Faceless, The Contortionist, and The Safety Fire in Sacramento on Oct. 1, 2013, and here’s his review of the show.)

I consider myself somewhat lucky in that I’ve gotten to see Between The Buried And Me three times, and each time has been during an era of the band that I enjoyed. I first saw them as part of the Ozzfest 2006 tour package, and then would later see them again after Parallax I came out, and they were playing that as a chunk of their set. I have an up and down history with the band and will fully own up to getting a bit tired of them during The Great Misdirect. However, I think the Parallax Hypersleep works have been some of the best material they’ve created by far, so hearing that they were doing the second one all the way through pretty much sold me on the show no matter who would be opening for them. Throwing The Contortionist and The Faceless into the mix made the deal ever so much sweeter, with the added bonus of of exposure to some new music through The Safety Fire – whom I had never heard prior to the show.

So it came to be that I returned to one of my favorite venues in Sacramento, Ace Of Spades, and stood out front on Tuesday, October 1st. The line grew pretty rapidly, and honestly, it was one of the most impressively attended shows I had seen in Sacramento, especially given that it was on a Tuesday. Even a quarter of the way through The Safety Fire’s set the place was starting to get packed. It would prove to be an exciting show too, as every band absolutely smashed their set and the crowd would feed right into it – and that was even prior to Between The Buried And Me’s massive light show and prog explorations, which would turn the whole place into a massive sweatbox.

I was excited when I spotted the folks from Rock Hard Live setting up because that meant that I would get the opportunity to link out to some of their live footage as soon as it was posted, which is something I haven’t gotten to do in a while. So be sure to check them out, as they do some great work for this city and really do show off that we actually have some good venues out here. 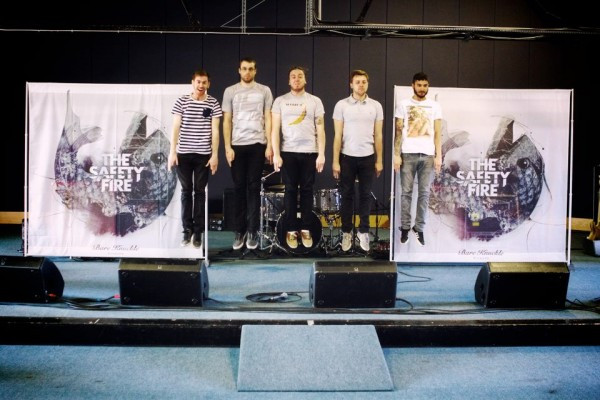 The night began with The Safety Fire, a band with whom I have had very limited experience, and the moment they started I figured out why. They’re not the most metal thing out there – in fact they seem to inhabit the nebulous area of progressive metal and alt. rock hybrids that contain a whole bunch of singing with the occasional super-heavy moment. The one band they reminded me a lot of was Dead Letter Circus, and it seems they share similar goals; both vocalists have very high ranges and can really hold a note, and most of the guitar playing bounces between really high notes, dancing back and forth.

Occasionally the band would get heavy, but not crushingly slow. Usually it was the type of simplistic slam that allowed them to stomp around the stage for a bit. I think – with the way the concert was built – that each band on the bill represented an aspect of Between The Buried And Me. For instance, The Safety Fire reminded me a lot of the band’s slower, high-singing moments where they lean heavily on guitar-assisted ambience and keyboards, except most of the keyboard work was being handled by some really talented guitarists.

Speaking of, they have a pretty good sense of humor about themselves because there were a couple of times when I noticed them getting a little goofy and going for full-blown 80’s guitar cheese poses, which was entertaining to watch. While I have limited experience with the band, a friend next to me noted they leaned heavy on their newer stuff and seemed happy with it. 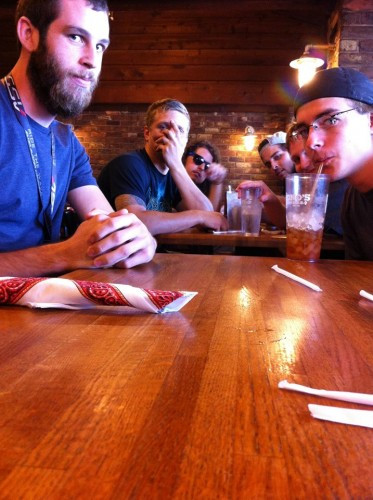 This show would mark the third time that I had the opportunity to see The Contortionist live, albeit this time with some pretty heavy shifts in the lineup. Every time I had seen The Contortionist before it had been with vocalist/keyboardist Jonathan Carpenter, and since then he left the band and had been replaced by Last Chance To Reason vocalist Michael Lessard. The band have shifted the keyboard work to tracks for the moment, and because of that they look more like a traditional band with Mike getting up front and personal with much of the crowd. Their set was also dominated by newer material off of Intrinsic, and it seemed like they played a lot of the songs that were keyboard-light and vocalist-heavy.

The Contortionist still fill many of their songs with slower, quieter passages with repetitive rhythms and they really zone out during those times, with Mike just rocking back and forth as it went before regaining life to scream at the crowd. He handles the songs well and I can see why the band chose to put him in the vocalist slot. Sacramento, in particular, has always seemed really receptive to these guys, outside of making ourselves appear really stupid during one vocalist/crowd rapport session that happened about halfway through the set, where the whole crowd didn’t respond to anything (in fact, I think you can hear me simultaneously laugh/choke on my drink on bootleg audio once I realized what had happened).

As I mentioned in my opening preamble, the folks from Rock Hard Live filmed much of the show and have been posting the sets as they get them uploaded. You can watch The Contortionist’s whole performance right here.

The Faceless once again hit Sacramento, and within a really short time after their last visit. Last time I saw the group was with Dillinger Escape Plan earlier this year, and once again they found themselves in the co-headlining slot and sticking to pretty much the same setlist as last time. I guess, in the interests of keeping things exciting for people who might’ve seen them already, they decided to do this tour sans bassist – certainly some strange goings on within the group, although it seems like it was a case of prior engagements, despite the fact that every other site on the web seemed to be freaking the fuck out as if this were some sort of sign that things within The Faceless might be a little weird.

The band’s setlist still consists of the Autotheism trilogy that opened up that disc, “Accelerated Evolution”, the combo of “Shape Shifters” into “Coldly Calculated Design”, “Ten Billion Years”, and “Xenochrist”, which is what they played when they were on the Dillinger tour. They still nail those songs and seemed a bit more lively and intense than they were last time around, especially on guitarist Wes’ side of the stage. Alex Rudinger is fun as hell to watch behind the kit, mostly because he’s a technical monster and absolutely crushes whatever The Faceless are throwing at him.

I think the biggest discussion of the night should be about the tragedy that has occurred in regard to frontman Geoffrey Ficco’s beard, which has seemingly disappeared. That thing was mighty as hell looking and personally, the fact that his beard is missing makes it probably the most important musician that has quit The Faceless so far. Rock Hard Live captured the group’s full set so you can see what I saw, as well as mourn the passing of Ficco’s mighty beard. You guys can check that out here. 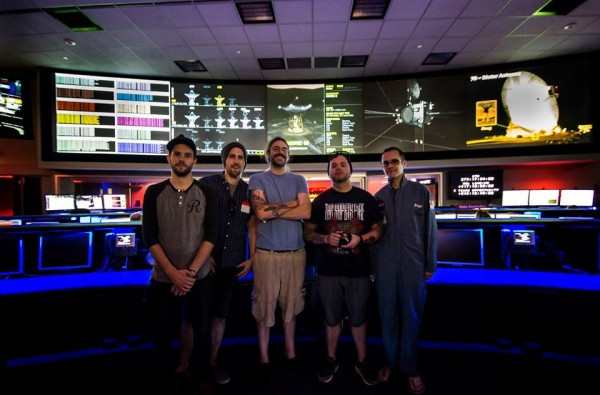 Between The Buried And Me

As I said above, I really enjoy Parallax II, so I had figured that it would be really enjoyable to see live. The Faceless had already left me pretty excited and Between The Buried And Me absolutely destroyed the stage. They’re a band commonly praised for being impressive musicians, and often I’ve found myself struggling to hear what’s going on in a song; when the band get going, they have so many different things happening at once that the details tend to get buried. Seeing it live takes away a lot of that difficulty — you really do hear each little thing that the band bury in a song.

Witnessing the group do the whole CD front to back and not stop once was incredible – they had a projector screen set up in the back that would change as the song did, but that really was your only sign that a song might have changed. Otherwise it was a whirlwind of insane guitar playing and drumming, and an incredibly intense vocal performance on the part of Tommy Giles. Every time the band dropped into another heavy, blast-filled section the floor at Ace Of Spades absolutely exploded. I consider myself lucky that I tend to hide out in one of the upper bars, but wow, the floor really got moving. When the band polished off the whole night by breaking out “White Walls”, the whole venue exploded, not just the floor.

Parallax II is a CD that I feel actually came off better live than it does on disc. It really was impressive how well those songs translated into a live setting and how much clearer things come across when you see it that way. I defer to the Rock Hard Live folks again because they captured the first two songs of the band’s set, which you can check out here.

2 Responses to “BETWEEN THE BURIED AND ME, THE FACELESS, THE CONTORTIONIST, THE SAFETY FIRE: LIVE AT ACE OF SPADES (OCT 1, 2013)”