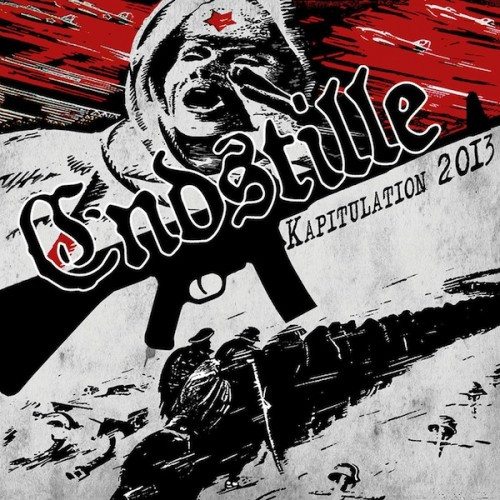 Germany’s Endstille are about to follow up their 2011 album Infektion 1813 with their eighth full-length, Kapitulation 2013, and today we will give you an exclusive taste of the album with the premiere of its eighth track, “Stalin Note”.

Endstille have always been somewhat unusual in the sphere of black metal, with many of their lyrical themes drawn from historical events, including events related to World War II and its aftermath. The “Stalin Note”, for example, refers to a proposal that Josef Stalin made to Western powers in 1952 “for the reunification and neutralization of Germany, with no conditions on economic policies and with guarantees for ‘the rights of man and basic freedoms, including freedom of speech, press, religious persuasion, political conviction, and assembly’ and free activity of democratic parties and organizations.”

German Chancellor Konrad Adenauer and the Western allies ultimately rejected this overture, and of course what followed were many decades in which Germany was a divided nation. There has been much debate about whether Stalin’s Note was genuine and about whether the West missed a chance for early reunification of Germany. It should not be forgotten, of course — and Endstille do not forget — the barbarity of Stalin’s regime.

While an accurate count of the number of lives lost under Stalin’s rule in the former Soviet Union is probably impossible, estimates range as high as 30 million dead from execution, famine, imprisonment, and other causes. Here in 2013, destruction on such a scale is incomprehensible.

You may have lost patience with our history lesson, but we thought knowing something about the subject of the song would help explain the music — which can be heard as both a scathing indictment and a grim memorial.

“Stalin Note” explodes in a dense black mass of ripping guitars, weapon-like drumming, and ravening howls, but it is also shrouded in darkness. With its bleak melody, the choral voices that can be heard through the maelstrom, and the crushing weight of the production, it becomes a hymn of death. It’s a powerful piece of music, and we’re happy to bring it to you.

Kapitulation 2013 is slated for release on November 12th in North America (November 8th worldwide). The album is now available for pre-order at the Season of Mist e-shop. A previously track from the album, “The Refined Nation” can also be heard below. Now, listen to “Stalin Note”: