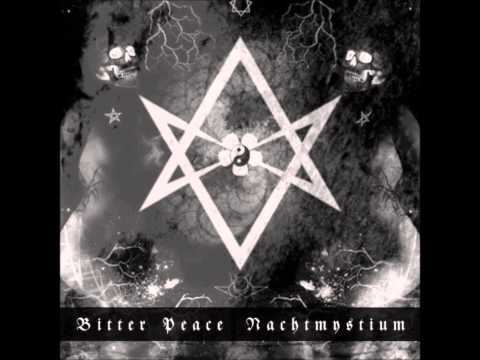 Hails and horns from sunny Southern California, where your humble editor has had his days and nights consumed by activities related to the old fuckin’ day job since Wednesday morning. This has viciously interfered with my ability to listen and write about metal. I will have a lot of catching up to do after I return to non-sunny Seattle tonight.

I did wake up early this morning in order to make a quick circumnavigation of the interhole in search of new things, and found some items worth talking about. I’m putting one of them in this post and will collect a few more in the next one, and after that I may have to resort to cat memes for the rest of the day. First item:

In a bit of perhaps unfortunate timing, I saw via a press release this morning that Plastik Musik will be releasing a vinyl split by an East Coast black metal band named Bitter Peace and Chicago’s Nachtmystium. I say “unfortunate timing”, of course, because of Blake Judd’s recent arrest for theft and the subsequent outpouring of criticism about Judd (vividly summarized here), which paints a portrait of a con man and ripoff artist.

But while the future of Nachtmystium (or at least the marketability of any future Nachtmystium music) is in doubt, what I’ve heard from the split is a strong reminder that Nachtmystium were a very talented band.

The Nachtmystium track on the split is a song named “Take the Black Pill”. It was recorded in 2008 but hasn’t been previously released. The performers included not only Judd but also Jeff Wilson (Wolvhammer, Chrome Waves), Jon Necromancer (Doomsday, Bones), Zack Simmons (Goatwhore, Doomsday), and Sanford Parker (Minsk, Twilight). Chris Black (Dawnbringer, Superchrist) wrote the lyrics), and Sanford Parker engineered and mixed the song.

The Bitter Peace track is named “Mahapralaya Namonama” and it appears here in between the band’s last album (released in May of this year), Opus II, and their next one (The Terrorist Manifesto), which will be released by Elegy Records in the coming months. This song was originally intended to be part of the new album but the band instead decided to include it on this split. I hadn’t previously heard anything by this band, but “Mahapralaya Namonama” sounds powerfully scathing and wretched.

I also found a YouTube stream of another track that will appear on The Terrorist Manifesto — “Veins Wide Open”. It’s very different from “Mahapralaya Namonama” but quite good — slow, bleak, and hallucinatory, with a mix of clean and harsh vocals and a fine guitar solo at the end.

Below I’ve embedded a teaser for the split, which includes excerpts from both tracks, as well as “Veins Wide Open”. The last Bitter Peace album can be found on Bandcamp, and I’m also including below a Bandcamp player that includes two more tracks from the new Bitter Peace album.

One Response to “SEEN AND HEARD: NACHTMYSTIUM AND BITTER PEACE”