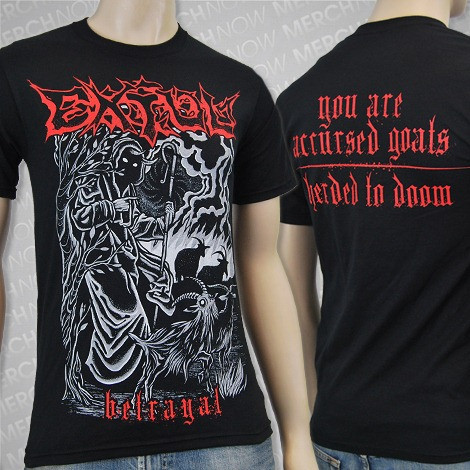 Most metalheads I know are good-hearted people (maybe because I steer clear of the assholes). Most metalheads I know also live from paycheck to paycheck — if they’ve got a paycheck. So when someone asks metalheads to spend money on a charitable cause, there needs to be an extra incentive; worthy causes are almost endless, but disposable income is in short supply. Offering something tangible that people are going to be tempted to buy anyway — and then donating all the proceeds to a good cause — that’s the kind of idea that should succeed. And that’s what Norway’s Extol and their record label have just done.

I assume you know who Extol are — but if not, they’re a progressive death metal band who’ve made one of this year’s standout albums (self-titled, and glorified in this NCS review). What they and their label Facedown Records have done is to make a special shirt available for sale, with all profits donated to New Life Mission Aid for use in helping homeless children in Kenya. As the band’s Peter Espevoll explains in a video for this project, New Life Mission Aid is a Norwegian charitable organization dedicated to providing food, shelter, and education to homeless kids in Kenya.

The shirt, as you can see, is badass. The design was created by Dave Quiggle. It’s dedicated to the new album’s opening song “Betrayal”, which in itself was inspired by the plight of those homeless children.

And to further support this effort, Extol have just released a new lyric video for “Betrayal”, which you can see and hear below, along with Peter Espevoll’s charitable pitch.

Some of you will be turned off by the religious impulse that inspired what Extol are doing, and may feel that putting your money toward this particular effort would be an endorsement of an idea you don’t believe in. I won’t push back too hard on that point. You either like the shirt (and the band’s music) enough to own it, or you don’t. And if it makes the decision any easier, the way I see it is this: The only idea anyone needs to embrace here is that helping ease the pain of these orphaned children is a worthy goal.

To order the shirt, go HERE.

9 Responses to “EXTOL’S “BETRAYAL”: A NEW VIDEO, A NEW SHIRT, AND A CHANCE TO HELP HOMELESS KIDS IN KENYA”