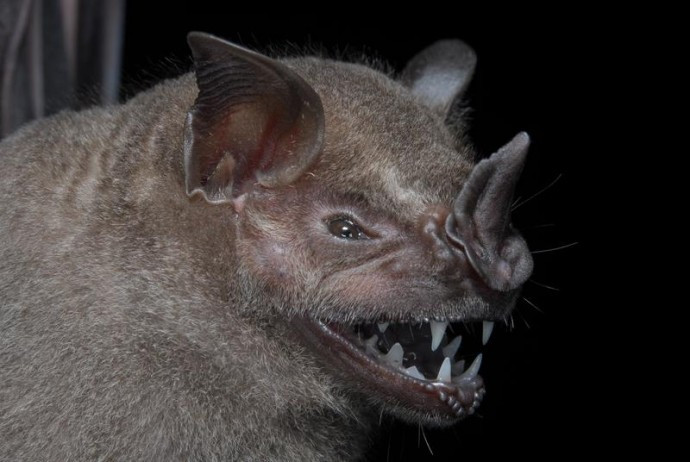 Yeah, it’s that time again — time to present our latest collection of images and videos that are metal even though they’re not music. Today we have seven collections of items for you.

We’re just days away from Halloween, so it seemed only fitting to begin with that ugly fucker up there. It’s a photo of Artibeus planirostris made by scientists from Conservation International during a recent survey of an Amazon rainforest in the northern South American country of Suriname. During the survey, 60 new species were discovered, including six new species of frogs, one snake, 11 fishes, and many insects. Artibeus plairostris is not a new species, merely the most abundant species of bat seen during the expedition.

Those large teeth are used for seizing and eating large . . . fruits. Yeah, sorry to disappoint you. The common name for this creature is the “Larger Fruit-eating Bat”, not the “Larger Blood Sucker”. But hey, let me make it up to you with this photo of a juvenile planthopper that was also taken during the expedition: 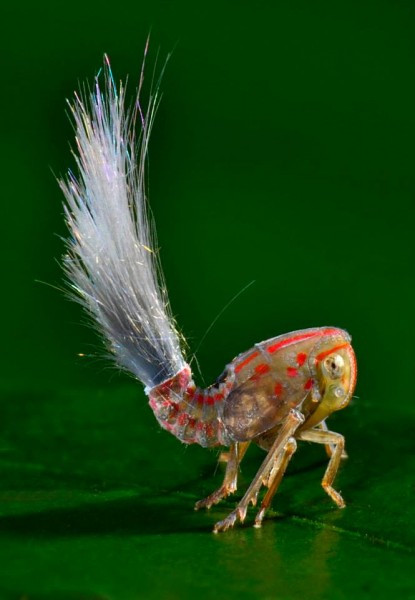 I’ll never think of the phrase “blow it out your ass” the same way again. That’s some vertical ass-blowing. The explanation:

“Many planthopper species exude waxy secretions from the abdomen, which sometimes form long strands like those seen in this photo. These strands may provide protection from predators — it could be that they fool a predator into attacking the wrong part of the insect, and the wax breaks off while the insect jumps to safety.”

But let’s go back to fruit bats for a few more minutes, because this video is fuckin’ hysterical, even if though seems to contradict the size description of Artibeus planirostris given above:

Okie dokie, now that we’re all thinking about Halloween, what kind of costume will you be wearing? How about a pair of these? 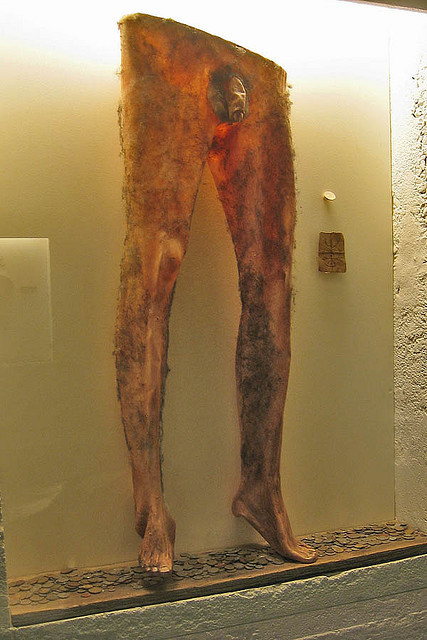 This is the only surviving pair of necropants, housed at the Museum of Icelandic Sorcery & Witchcraft. According to the museum’s web site:

If you want to make your own necropants (literally; nábrók) you have to get permission from a living man to use his skin after his death.

After he has been buried you must dig up his body and flay the skin of the corpse in one piece from the waist down. As soon as you step into the pants they will stick to your own skin.

A coin must be stolen from a poor widow and placed in the scrotum along with the magical sign, nábrókarstafur, written on a piece of paper. Consequently the coin will draw money into the scrotum so it will never be empty, as long as the original coin is not removed.

To ensure salvation the owner has to convince someone else to overtake the pants and step into each leg as soon as he gets out of it. The necropants will thus keep the money-gathering nature for generations.

I’ll never think of the phrase “man purse” the same way again. I can see why this tradition fell out of favor. I wouldn’t wear another dude’s scrotum no matter how much cash was in there. I can’t really see diggin’ in the scrotum to pay for a latte at my favorite coffee shop either. But for Halloween wear? Hell yeah, especially for the ladies. Female drag!

(via Disinformation and a tip from Andy Synn.)

Okay, enough about Halloween. Let’s turn back to the natural world with this video about ice-calving. According to the description following the video at YouTube: “On May 28, 2008, Adam LeWinter and Director Jeff Orlowski filmed a historic breakup at the Ilulissat Glacier in Western Greenland. The calving event lasted for 75 minutes and the glacier retreated a full mile across a calving face three miles wide. The height of the ice is about 3,000 feet, 300-400 feet above water and the rest below water.” From the footage, they made a movie named Chasing Ice, which went on to win a slew of awards.

This excerpt from the film is amazing, both to watch and to hear. As a sign of the impact of global warming, it’s also scary. Credit to Dane Prokofiev for the tip on this one.

Since I’m now thinking about planetary sounds, let’s stay with the subject but loop in another planet. (How’s that for a transition?)

In April 2002 when NASA’s Cassini spacecraft approached Saturn, it began recording intense radio-wave emissions generated by the planet’s magnetic fields. NASA released sound files of these recordings, after modifying them for human hearing. NASA first compressed the time on the recordings, reducing 27 minutes of sound down to 73 seconds. Since the frequencies of these emissions are well above the audio frequency range, NASA also shifted them downward by a factor of 44. More info can be found here.

The following video assembles some of the NASA recordings and matches them with appropriate imagery. Very cool.

Since we’re now off-planet, let’s stay there for one more item. (How’s that for a transition?) This (via TYWKIWIDBI) is a “gravity map” of the dark side of the moon, which “shows variations across the moon’s surface caused by both surface irregularities and a lumpy interior. The red sections indicate relatively high gravity.” Beautiful. 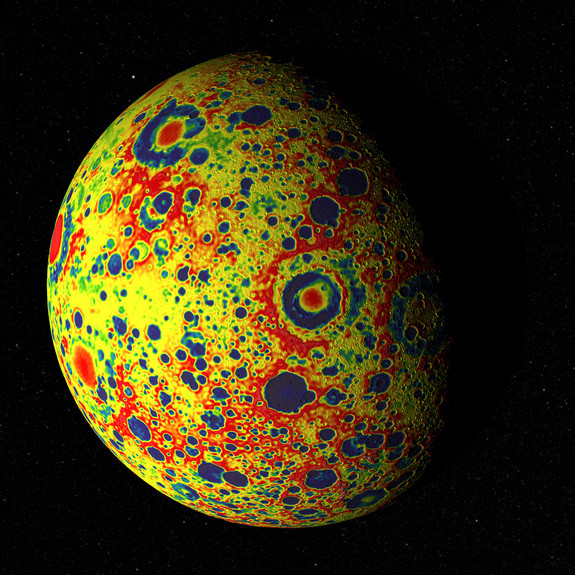 And speaking of the dark side of the moon, last month one of NASA’s “Astronomy Photos of the Day” was a video created using a large number of images returned by the Lunar Reconnaissance Orbiter to show a rotating moon — something we will never actually see, since the moon is tidally locked to the Earth, showing us only one side.

“The time-lapse video starts with the standard Earth view of the Moon. Quickly, though, Mare Orientale, a large crater with a dark center that is difficult to see from the Earth, rotates into view just below the equator. From an entire lunar month condensed into 24 seconds, the video clearly shows that the Earth side of the Moon contains an abundance of dark lunar maria, while the lunar far side is dominated by bright lunar highlands.”

(via NASA and TYWKIWDBI) 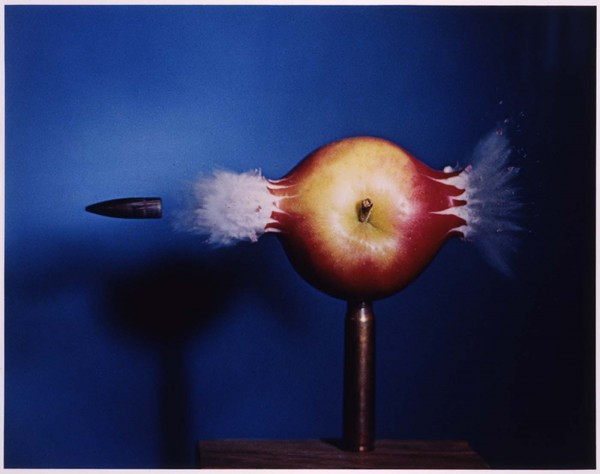 “In 1964 MIT professor Harold Edgerton, pioneer of stop-action photography, famously took a photo of a bullet piercing an apple using exposures as short as a few nanoseconds. Inspired by his work, Ramesh Raskar and his team set out to create a camera that could capture not just a bullet (traveling at 850 meters per second) but light itself (nearly 300 million meters per second).”

What you’re about to see is a video, using femto photography, of a pulse of laser light passing through a Coke bottle. If Raskar had made a similar slow-motion video of Edgerton’s bullet passing through an apple, it would take a year to watch it. This is mind-blowing. And there’s more cool stuff in this video besides.

Now let’s wrap up this installment of THAT’S METAL! with a sequence that’s loosely organized around the concept of illusions. The first two images below are examples of the Ponzo Illusion (first demonstrated by Italian psychologist Mario Ponzo in 1911), a phenomenon in which the mind tricks itself into believing that objects which it thinks are farther away are larger than they really are. This trickery is a function of the background imagery surrounding the object being observed, which you can also think of as perspective.

Perhaps the most widely observed example of the Ponzo Illusion is the apparently growing size of the moon as it approaches the horizon (explained here). In the examples below (credit TYWKIWDBI again), the images of the cars are in fact the same size (if you don’t want to get out your ruler, go here for proof), as are the red lines in the second photo. 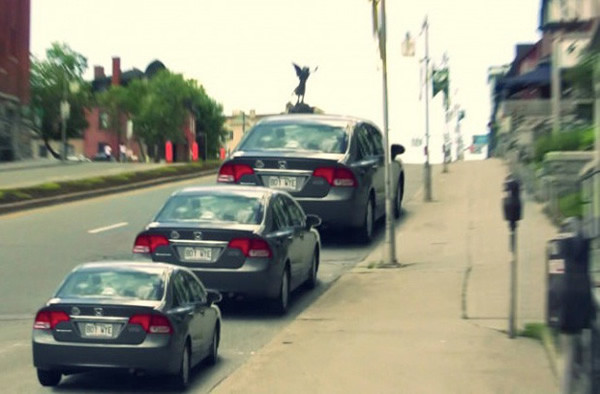 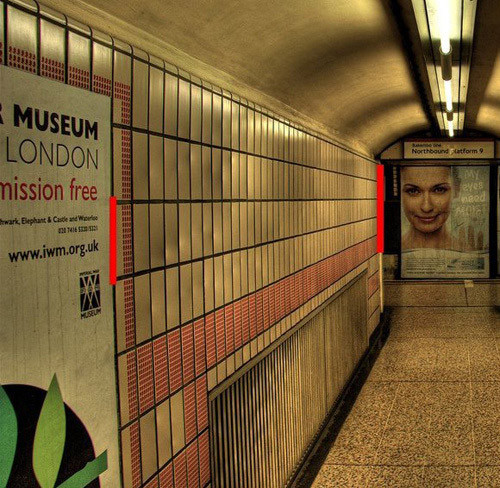 Now, check out this commercial from Honda for its CR-V 1.6 diesel model, released last week, which demonstrates that things aren’t really always what they seem at first:

And finally, here are photos of creations by 19-year-old Tokyo-based artist Hikaru Cho, who uses acrylics to paint incredibly weird and lifelike images onto human skin. We are assured by CVLT Nation that these are actual photos, not the trickery of photoshopping, and you can see more of Cho’s unsettling creations via that link. Definitely metal. 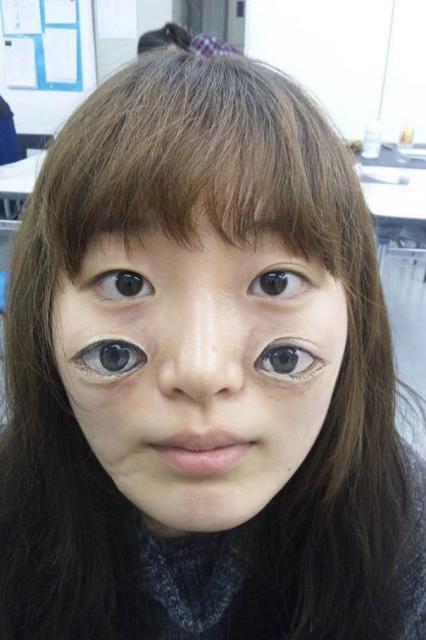 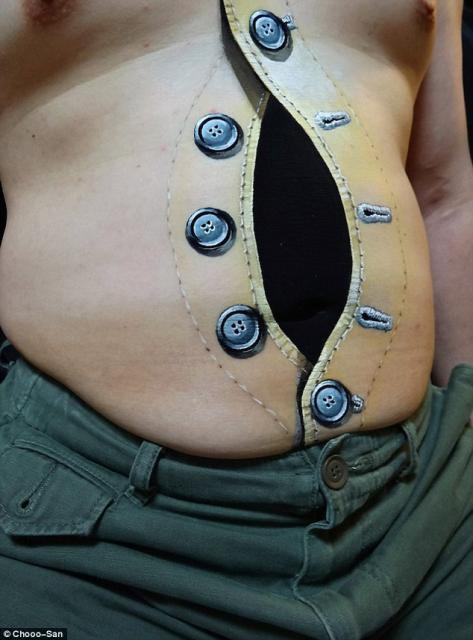 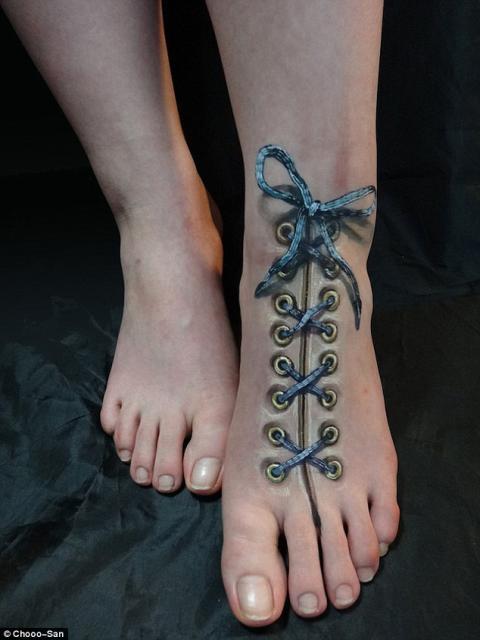 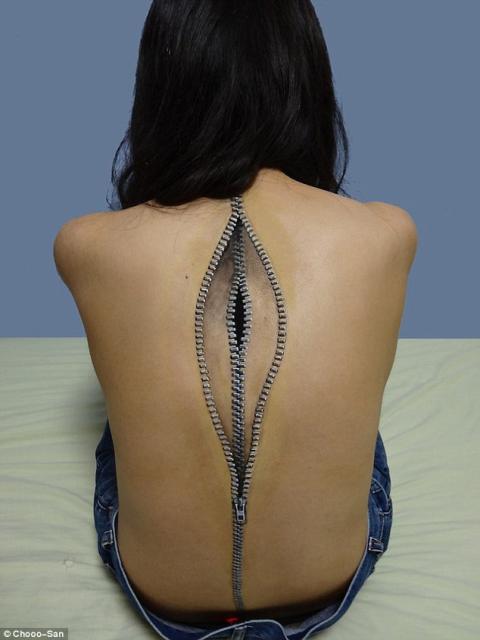