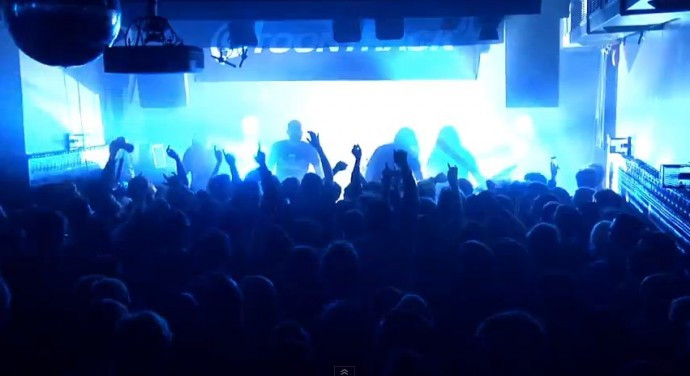 I almost didn’t post the first video. I almost didn’t even watch it. I don’t like being the last metal blogger in creation to post about things, so when I see a video that has already made the rounds, I kind of assume that everyone who cares has seen it and I should spend my time on something else. But I got an e-mail today from Johan, an NCS reader who was actually at the club in Sweden where the video was filmed, watching the performance as it happened, and he changed my mind.

As he explained in his message, “Last year Toontrack (creators of drum-software and sample-libraries) decided to throw a staff party/PR stunt by having Periphery and Meshuggah play gigs at Scharinska villan in Meshuggah’s hometown of Umeå. Nothing special right? Except for the fact that Scharinska is a tiny club fitting 300 people in total, maybe 200 in the actual concert room, and that only 100 tickets were released to the public. The rest were given away to employees and partners. Needless to say, the gig was tremendous and the crowd was boiling (literally, it was insanely hot)….  The camera that is shooting straight towards the stage is pretty much where the back of the room is, it’s that tiny.”

It really is an amazing thing to watch and hear, though it revives my own bitter memories of missing the show that Meshuggah performed at a similar-sized club in Seattle three or four years ago. Here’s “Rational Gaze”, live (thank you Johan):

Okay, here’s one more fix for you, this one more recent. In the following video, which was produced and edited by Ola Englund (Feared, The Haunted), Meshuggah’s Fredrik Thordendal tests out an analog guitar synthesizer called the Pigtronix Mothership. I have no fucking idea what an analog guitar synthesizer is, though I do find the name of this one appealing. There’s a shitload of additional technical information from His Eminence Mr. Thordendal at YouTube, which might as well have been written in Klingon given my inability to understand it.

But I do understand the sound of guitar asskickery. It sounds like this:

One Response to “YOUR MESHUGGAH FIXES FOR THE DAY”