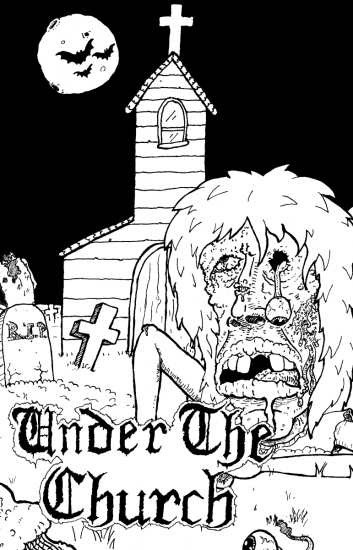 A week ago I posted a list of the best releases I’d heard over the last five years by newer bands whose sound was strongly influenced by old school Swedish death metal. The last release I put on that list before posting it, though you couldn’t tell, was the 2013 demo by a Swedish band named Under the Church. I heard it for the first time the day I finished the list, and one listen was all it took. Since then I’ve listened to it again and again, and the more I’ve listened, the more I’ve liked it.

Word has been spreading ever since the demo became available months ago, probably in part because the band was started by two former members of Nirvana 2002 — drummer Erik Qvick and bassist Lars Henriksson — but mainly because the music is so good. And sure enough, in the week since my list went up, Under the Church announced some good news: They’re going to record an album, and the album is going to be released by Pulverised Records. If you’ve already heard the demo, then you know just how good this news is. If you haven’t, I’m going to explain.

The demo consists of three tracks. “Under the Church” is lo-fi as fuck, a churning, heaving mass of burly, distortion-heavy riffs, muffled drum beats, and piercing cymbal strikes. Raw, ragged vocals and a ripping guitar solo complete the picture. “Haunted By Demons” down-shifts dramatically into a moaning, groaning death/doom crawl. The air in this one is thick and pestilential, even when the tempo kicks into a d-beat-driven chug, like a mammoth haunted locomotive on the rails. For the finale, “Back To the Grave” accelerates again with a squalling lead guitar cutting through a tank-heavy d-beat charge. It’s a crushing rush for most of its brief length, but it also includes an authentically morbid off-tempo section, thick with ghoulish atmosphere.

This unholy chainsaw fest is so spot-on that it could have been made more than two decades ago — but we’re awful lucky to have it today in all its festering glory. And we’ll be luckier still to get an album’s worth of this maggot-ridden decay next year.

Demo 2013 is on Bandcamp for download and Under the Church is on Facebook for liking. Check the links below, and then listen.