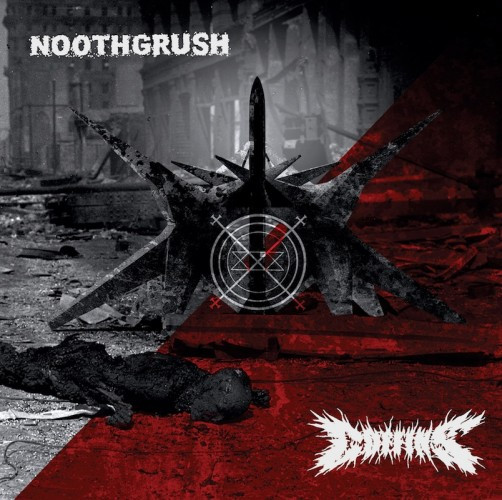 Doom comes in many flavors, but at the core of the sound there’s always a black hole, no matter what else may be draped around it. It’s just a question of how big that light-sucking core happens to be. On the forthcoming Southern Lord split LP by Noothgrush and Coffins, it’s massive.

My introduction to Oakland’s Noothgrush came in 2011 via Southern Lord’s The Power of the Riff tour, a limited run of west coast dates that marked the band’s return after splitting up in 2001 (and their first show in Seattle since 1997). Reading again what I wrote about the show (here) reminds me of what a revelation the band’s music was:

Pelican, who performed later the same night, posted this on their Facebook page right about the time Noothgrush finished their set: “Good lord, Noothgrush are heavier than a knapsack full of anvils.” 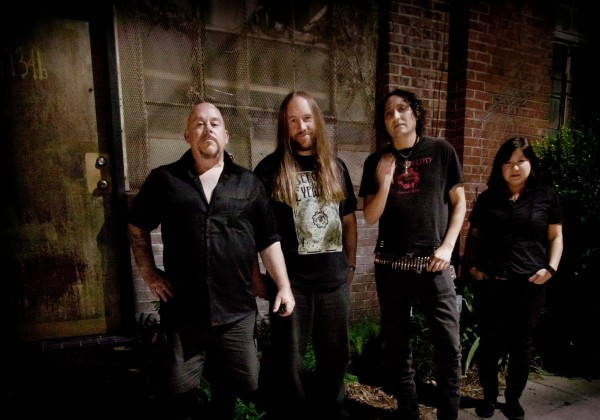 Since those tour dates in Seattle and San Francisco, Noothgrush have gone on to perform extensively in both the US and Europe, but this split includes their first new songs since the 2011 split-up (as well as the appearance of new vocalist Dino Sommese). There are three of them.

“Humandemic” is one inexorable series of hammer blows built around huge, sludgy chord progressions and slow drumbeats and cymbal taps, with high harsh shrieks erupting in sync with the bass and drum rhythms as if to make damned sure that nothing will be left standing by the song’s end. After a windswept introduction “Jundlund Wastes” moves the music from slow to slower. If anything, it’s even more bleak, black, and crushing than “Humandemic”, but the simple, morbid, minor-key melody that crawls into the song and unexpected electronic pulses in the mid-section make it the more interesting of the two.

The final offering, “Thoth”, is a 9-minute dirge monster. The riffs are raw and tarry, the pacing utterly funereal, the vocals wretched and ravaging. The percussion punches straight through the guts and then starts breaking down the spine. Waves of feedback and disturbing, tuneless, echoing vocal proclamations take the music off into realms of hallucinatory nightmare. “Crushing” doesn’t begin to do the song justice. It slowly breaks you down into your component atoms and then scatters them to the void. 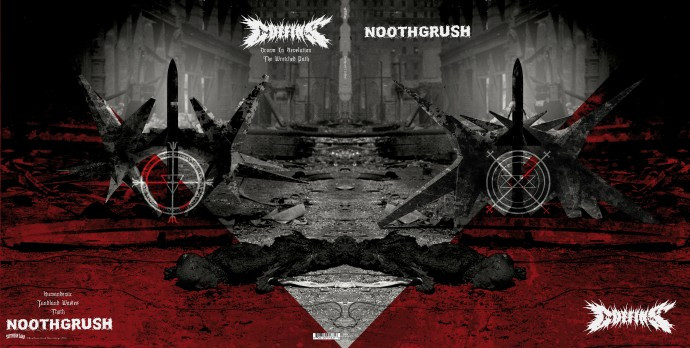 Where Noothgrush bring the doom in a vat of sludge, Japan’s Coffins wrap it in a shroud of gory, grooving death metal. Their two contributions to this split mark their follow-up to their 2013 full-length The Fleshland.

“Drown In Revelation” launches with a mix of fuzzed-out bass and tribal drums, followed by a blast of swelling feedback that becomes a bridge to the huge, chugging rhythms that form the backbone of the song. With vocalist Uchino uttering ghastly hoarse bellows, the song eventually moves into a more rambunctious and tumbling romp followed by a lumbering stomp, without ever casting off the thick mantle of doom. “The Wretched Path”, by contrast, is the kind of dance music you might hear at a golem nightclub. With a lurching, bouncing beat and segments of Sabbathian riffage and soloing, the song is an up-tempo blast of distortion and decay. I’m tempted to call it stoner death. 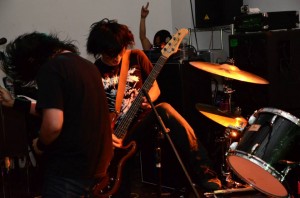 Both of the Coffins tracks make an excellent complement to the Noothgrush songs — definitely cousins in a doomed bloodline, but twisted into different mangled shapes. As a collection, these five songs are well worth the time and money of any decadent devotees of the dreadful and the destructive. They’ll pound you flat and then reanimate your maggoty corpse for one last party.

The Noothgrush / Coffins split will be released on 12″ vinyl by Southern Lord on November 26. However, a pre-order of the vinyl (on Bandcamp) will also get you a digital download of the album when it releases. The excellent cover art is by Josh Graham; you can see bigger versions of the front cover and the gatefold by clicking the images above.

Unfortunately, I don’t have any tracks to stream for you. I’ll keep my eyes open, and if any become available for public listening I’ll add them below.

UPDATE: This split is now available for streaming and download on Bandcamp (here). Listen below.