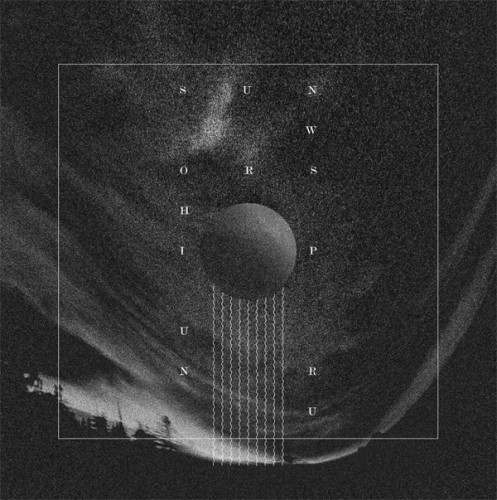 This is a review of a split release by two German black metal bands — Unru and Sun Worship — that will be issued on 12″ vinyl on December 10, 2013, by An Out Recordings and Sick Man Getting Sick Records. Each band contributes a single song, one per side. Both songs are now streaming on Bandcamp and both are available as immediate downloads with pre-orders of the record. And both are really good.

Unru’s first release, Demo MMXIII, came out this past January. It was an 11-track affair in which none of the songs reached four minutes and more than half were less than two. By contrast, Unru’s contribution to this split, “Von der Flüchtigkeit des Todes”, is nearly 10 minutes in length. For most of that time, it’s a storming cascade of distorted tremolo-picked guitars and blasting drumbeats through which a grim melody rises and falls like heaving waves. The seething intensity of the music is enhanced by acidic, reverberating shrieks.

The storm breaks in places, making way for pounding riffs and ringing guitars, as well as passages of chilling, eerie ambience with ominous spoken words. At the finish, the guitars fade, and the final sounds are those of distant, agonizing cries and the martial thumping of the drums. The music seizes the listener in its clawed grip, and even after 10 minutes you wonder where the time went.

Prior to this split, Sun Worship released a demo, another split, and an EP since 2011 (all of which are on Bandcamp). Sun Worship’s new track is named “Remembrance”, and it’s also a long one, slightly exceeding 12 minutes. Like Unru’s contribution, “Remembrance” includes its fair share of frenzied drum blasts, waves of shrill tremolo chords, and caustic shrieks. But the song is also suffused with an ambience of aching loss. The music moves through a series of repeating musical motifs, the high-pitched tremolo drilling balanced by deep grinding chords, the blasting drums replaced by slow rhythmic pounding and attention-grabbing progressions. Multiple dual guitar harmonies give the song added depth and emotional resonance.

As a whole, “Remembrance” is a powerfully dramatic work that fully justifies its extended length. It draws the listener into a bleak world, one suffused with an atmosphere of despondence, yet still intensely gripping.

People who aren’t vinyl collectors will think twice about paying the price of the record in order to obtain the digital tracks — especially because there doesn’t seem to be a way to get both songs as downloads with a single LP purchase: You can buy the vinyl from either of the bands’ Bandcamp pages, but you only get a download of that band’s song with the purchase (although both tracks are streaming on the Sick Man Getting Sick page, there’s no digital purchase option there).  UPDATE: Both songs can now be downloaded with a vinyl order from Sun Worship’s Bandcamp page, and it appears both tracks can also be downloaded without the vinyl purchase now (see the comments below).

Nevertheless, in my case thinking twice was all it took — I gave them my money, even though I had to pick between the two songs for download. They’re that good. Check out the music below.