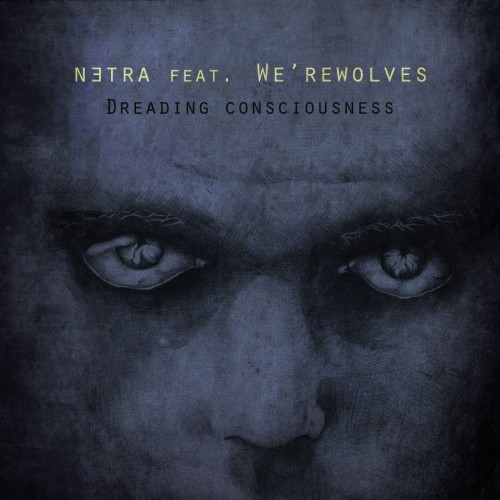 I’m probably one of the least qualified people imaginable to review this new EP. However, every day I read about, and occasionally meet, all manner of motherfuckers who are unqualified to do what they are doing, so I don’t know why that should stop me. Besides, unlike all the motherfuckers to whom I refer, at least I’m being honest about my lack of qualifications. Putting to one side the question why you should continue reading this review in light of my disclosure, I shall forge ahead.

The title of this EP is Dreading Consciouness and it was released on November 18 by Canada-based Hypnotic Dirge Records. That label releases an eclectic range of music, but Dreading Consciousness is an odd one even for them. It’s a collaboration between netra (the one-man project of Steven LeMoan, a Frenchman who now lives in Norway) and an underground rap duo (Hockeymask and Konsept) who call themselves We’rewolves. Netra provides the music, We’rewolves the rhymes.

And here’s where my lack of qualifications come in — because I am not well-versed in either the kind of trip-hop backing music that dominates most of the three songs on the EP or hip-hop, yet I do like this.

With one exception, the music is synthetic, with simple, stripped down melodies and compulsive beats, layered with such things as dark, ambient wash; whispering shimmering sounds; eerie, alien pulsations; and distorted keyboard chords. The music is slow, rhythmic, at times hallucinogenic, the atmosphere cold and depressive. Yet as spare as the melodies are, they have a way of hanging around your head after the songs have ended.

The rhymes match the dark ambience of the music, full of musings about rough sex, violence, self-destruction, self-disgust, drug use, alienation, degradation, suicidal tendencies. . . you get the picture. The rhyming and the music work together effectively, creating a mood of almost nihilistic bleakness and abandonment.

The final song on the EP comes closest to metal. It’s almost like  a melding of black metal, trip hop, and rap, with double-bass kicks, a wall-of-sound haze of guitar noise rising, a damned cool guitar solo, and even a brief blast of harsh vocals. Even more than the other two, this song has also proven to be powerfully infectious — I keep coming back to it.

Dreading Consciousness is a pay-what-you-want download on Bandcamp. This EP is obviously way off the usual beaten path for this site. I’ll be curious what you think of it.