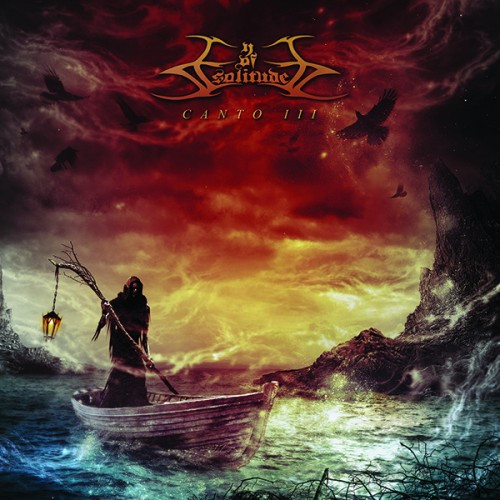 Some albums are a real slog. They drag, they stagger, they pull you down. They’re like a car crash in slow motion (and not in the good way). You simply can’t turn away from them. You get through them only by virtue of sheer will-power and bloody-minded perseverance.

Those are the bad albums.

Others are an epic journey. Physically and emotionally draining, yet cathartic and captivating. They hook their fingers into your soul and simply refuse to let go until the last dying note. Every step along the way reveals something new, something memorable and magical, making every aching mile worth the effort and toll.

This is one of those albums.

Six songs of gloom-choked atmosphere and reverent occult power, Canto III really is a brilliant album, reproducing in musical form the themes and emotions at the centre of Dante’s infamous Divine Comedy.

At a hair over 66 minutes in length, there’s no question that it’s a difficult – even demanding – listen, washing over the listener in overwhelming waves of ungodly force, opening up into colossal vistas of sound and space, before crashing back down upon them in a cataclysmic cloud of claustrophobic agony.

Despite the sheer power and palpable pain on display here though, Canto III is a patient album, which moves at its own pace and blooms in its own time. The six tracks unfurl slowly and menacingly, each Act a lengthy chapter of trial and tribulation, moving from calming serenity to doom-laden ferocity as the story unfolds.

The journey is narrated by a series of cavernous death growls, which preach a litany of loss and suffering over dense, morbid riffs and deathly, funereal drum beats, choking off all light and hope, dragging the listener along the endless path of penance and perdition. Yet at times the gloom is broken by a moment of shining clarity – as a mournful violin sweeps across the desolate musical landscape, or a tremulous melodic voice echoes out of the darkness – casting a ray of light into the abyss, if only for the briefest of times.

But when the darkness prevails we are cast naked and shivering into the dark, where searing traces of blackened brimstone fury and scalding, frost-bitten hate slice their way through the torment and the tumult, adding their elemental might to the bone-wearying grind of monolithic riffs and unforgiving drums which make up the relentless, soul-crushing backbone of each track.

There are yet islands of peace to be found though. For an album of such hellish, damnable intent, there are moments of quiet and reflection woven into the tapestry that reveal the care and creativity which went into its creation. Almost without warning, in the midst of a howling gale of sound and fury, the eye of the storm will be revealed, exposing a moment of clarity amidst the chaos and confusion.

At times the layers of pain and anguish are stripped away, leaving behind perhaps only an isolated voice, or the crystalline chime of a piano, to break the sudden silence. Its at these moments that the band truly bare their soul, in all its fragile, wounded glory.

There’s a true wealth of emotion on display throughout each track on this album, sorrowful and despairing, yet never truly hopeless. Soaring leads lift the listener back to their feet when the weight of it all seems to become too much, while the ravenous lash of every guttural growl and penitent scream serves to drive each song mercilessly onwards, down ever deeper into the valley of shadow and death.

Where there is creativity, there is contradiction, each Act running the gamut from pain to pleasure, from life to loss, from soaring peaks to gloomy valleys. Tireless, glacial riffs dominate the landscape, threaded through with strands of etheric melody. The rolling stormfront of drums conceals the cleansing rain of subtle patterns within. Seductive symphonies of sound swirl majestically in a vortex of exquisite misery and excruciating melancholy, dancing with an elegant mournful grace.

Each and every element – from ominous doom to dazzling melody – is but a single piece of the puzzle, a thread in the tapestry, woven together here into something truly magnificent.

Canto III was released last month by Kaotoxin Records and can be ordered here or downloaded via Bandcamp. Listen below: