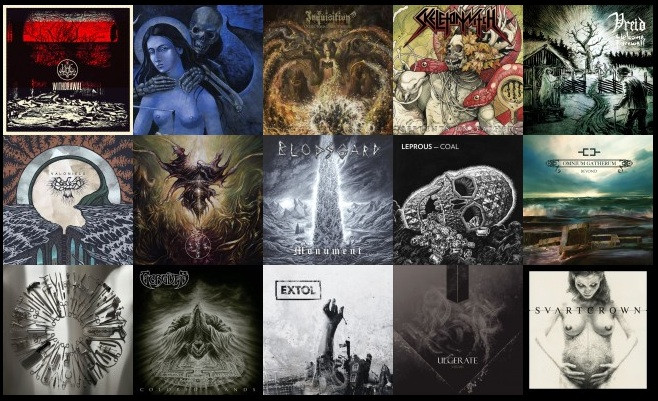 (Today, we begin rolling out the year-end lists of our site’s regular staff with the first part of Andy Synn’s annual five-part reflection on the past year. Of course, we will also continue posting Listmania columns by guest writers. Look for additional installments in Andy’s series every day this week.)

At the end of every year I spend some time listing all the albums and EPs which I’ve listened to enough to feel like I’ve formed a solid opinion on them. Then I break them down into three categories.

The Great (the ones I feel like I can legitimately defend as examples of the pinnacle of what the genre has produced this year), The Good (which vary from simply solid to almost awesome, some missing out on greatness by the merest hair’s breadth), and The Disappointing (which aren’t necessarily bad albums… they’re just… well… disappointing in some way!)

There’s definitely going to be some albums missing (for example – there’s no Amon Amarth or Chimaira, as I simply haven’t had the time to listen to either properly), and some that I’ve simply forgotten about, but overall I think it’s still a pretty formidable collection. Case in point, the “Great” section – by far the longest – is 53 albums long, which I think reflects the overall stellar quality that 2013 has brought us.

But enough of that… on to the first list.. the albums which I think are the best examples of this past year in the world of metal.

First off, an honourable mention. Omen by Antestor was actually released right at the very end of last year, so close to the end of the year in fact that barely anyone had a chance to hear it. Which is unfortunate, as it’s a fantastic album of ripping Black Metal with a prominent taste for both the more melodic and the more progressive sides of the genre. Similarly Amiensus officially released their unexpectedly riveting debut Restoration on December 31, 2012, but for me that still qualifies for this year’s round-up.

It’s definitely safe to say that this year belonged to Death Metal, with so many bands returning, reforming, or resurging, in fine form. That’s not to say that Black Metal wasn’t represented well, with both Woe and Aosoth unleashing their own specific brands of black hellfire, and both Inquisition and Lightning Swords of Death demonstrating just how blistering the genre can be, without sarificing the power of the riff.

On the thrashier end of the scale, both Skeletonwitch and Vreid put forth killer albums of raging thrash riffs and pure black venom, showcasing the impressive maturity of their song-writing on perhaps their finest albums yet. While over on the proggy side of the street both Progenie Terrestre Pura and Oranssi Pazuzu used the building blocks of the Black Metal genre as a foundation on which to construct something unexpectedly magickal.

On the more difficult, purposefully challenging side of things, a triple-header of AEvangelist, Altar of Plagues, and The Howling Wind channelled their inner demons into an expression of black art at its most uncomfortable and uncompromising, while Blodsgard came out of nowhere with one of the most gloriously epic and evil albums I’ve heard in a long time.

Something was clearly missing something though, with several of Black Metal’s biggest names unfortunately absent, leaving only three legendary names to keep the black flame burning. Satyricon delighted and disgusted in equal measure with their melancholic, progressively inclined return to the scene, while the ever over-productive Horna finally unleashed a new full-length album, one which captured their raw power with fresh and searing clarity. And finally, there’s no way I can’t mention Rotting Christ, who continued their fine return to prominence, going three for three with the release of Κατά τον δαίμονα του εαυτού.

The proggier side of metal – in all its multiplicitous forms – certainly had a great year as well, releases from In Vain, Cronian, Persefone, and Leprous all vying for the crown with their endless twists and turns and vast array of complex riffs and phenomenal vocals.

On the shreddier, more self-indulgent side of things, both Scale The Summit and Protest The Hero pushed their technical and compositional skills to the very limit, each crafting a thunderously impressive and engaging album out of pure musical talent and a lack of inhibition, and in terms of pure melody, both Omnium Gatherum and Wolfheart put out albums that were almost peerless, melding progressive nuance and sizzling hooks with an artisan’s care.

The Ocean put out a wonderful concept album plumbing their own musical depths on Pelagial, while Benea Reach unleashed some ferocious heaviness and crystalline intelligence on Possession. However, both these bands owe a huge debt to Cult of Luna, who released perhaps their defining album with the Metropolis-themed Vertikal, once more stretching the boundaries of what metal could (and should) be.

Talking of bands pushing their own boundaries and ambition, 2013 also saw the release of two nigh-untouchable double albums, from almost opposing ends of the metal spectrum, with Soilwork’s The Living Infinite and Celeste’s Animale(s) demonstrating both bands firing on all cylinders and producing stellar material at an almost unbelievable rate.

This was also a year of resurrections, with the return of living legends like Carcass, Gorguts, and Extol — as well as the welcome reformation of perennial NCS favourites Man Must Die and Byzantine – all of whom produced career-defining albums this year.

Ultimately though, the year belongs to Death Metal. From the shred-tastic Unwelcome by Arsis to the sheer brute force of Immolation, from the new school depravity of The Black Dahlia Murder to the old-school crush of Grave, 2013 dominated and devastated like no other.

Established legends like Suffocation, Kataklysm, and Hate built upon their legacies with new abums mixing technical skill and sheer blood and thunder aggression, while challenging, caustic albums from Svart Crown, Sulphur Aeon, and Ulcerate demonstrated just why they’re the future of the genre.

The angular brutality and hypnotising melody of In-Quest’s The Odyssey of Eternity went a long way towards finally (and deservedly) establishing the band as a real force to be reckoned with, while the sheer insanity and excess of The Monolith Deathcult’s Tetragrammaton continued to show just why they’re considered the true masters of Supreme Avant-Garde Death Metal.

If you want to talk about excess though, then this year was a prime one for fans of the technical arts of death. Quite apart from the already mentioned triptych of Gorguts, Arsis, and Man Must Die, the debut albums from from Nero Di Marte and Rivers of Nihil immediately established the bands as contenders for the throne, and showed that the future of the genre is most definitely in good hands.

I can’t end things without giving well deserved kudos to three of the UK’s finest bands, all who produced fundamentally amazing and captivating albums this year. Chapters finally got around to releasing their long-gestating debut, and it was certainly as good as we’d all been hoping it would be. Eye of Solitude continued to go from strength to strength with the near flawless mix of death and doom delivered on Canto III. And new discovery Rannoch planted their flag firmly in the ground of greatness with the dazzling complexity and artisty of Between Two Worlds.

Oh… and Heaven Shall Burn continue to be great. ‘Nuff said.

Here’s all the bands I selected in list form, so you can all see just how much great music was released this year.

Aosoth – IV: An Arrow In Heart

In-Quest – The Odyssey of Eternity

Inquisition – Obscure Verses For The Multiverse

Kataklysm – Waiting For The End To Come

Man Must Die – Peace Was Never An Option

Rivers of Nihil – The Conscious Seed of Light

Scale The Summit – The Migration

Keep your eyes peeled for my next list, covering all the “Good” albums which – while all special in their own way – simply didn’t quite make the cut for greatness this year round!