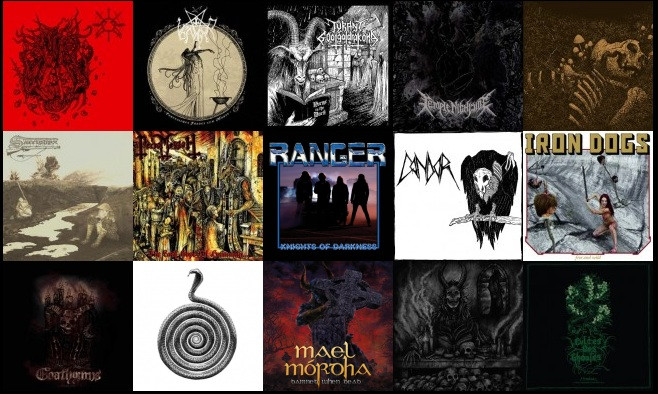 (In this guest post, long-time NCS supporter and student of dark and dirty metal SurgicalBrute provides his personal list of 2013′s best releases.)

This will be my fourth time writing an End of the Year list for No Clean Singing and the one thing Ive learned is that it gets no easier. Way too many bands are releasing really amazing albums, and the more you dig the more you’re going to find. There just isn’t enough room to cover every band that deserves to be mentioned this year. Even now, I’ve got bands I plan to listen to that could easily reshuffle this whole list.

Anyway, it took a little work, but I did manage to thin a pretty massive list down to 20 bands that I feel stood out from the rest. I’ve also included a few runner-ups that are more than worthy of being on here, so I’d encourage you to check those bands out too. (Seriously… the only reason this isn’t a top 30 list is because I’m too damn lazy.)

So, in no particular order, here’s the list I know everyone’s been waiting to read… enjoy… \m/

This year, Swiss newcomers Bölzer have released one of the most standout albums of any band. A truly unique take on blistering blackened death that uses imaginative guitar work, filled with hook-laden riffs, Aura is twenty-three minutes of completely addictive music that every metal fan should add to their collection.

Two years after releasing their awesome self-titled debut, crusty death metallers Bones are back with their sophomore effort, and does it ever go. As with their first album, things like technicality are pretty much non-existent… The guys in Bones are only interested in burning your face off with hi-octane metal. Sons of Sleaze isn’t going to surprise anyone, but music this good doesn’t need to.

This is the second full-length album by Polish black metal band Cultes Des Ghoules and it surpasses Häxan in every way. Henbane is an auditory experience filled with insidous atmosphere, oppressive droning, and hypnotically primal black metal. There are plenty of releases that deserve to be on a year-end list, but this album is a bona fide classic.

Hailing out of Liverpool, England like a slowly rising corpse, this debut EP is a rolling monolith of raw blackened doom. Punctuated by a thick atmosphere and mesmerizing riffs, Crypt Lurker are quickly making a name for themselves in the metal underground with this release.

As a band, Mael Mordha have been around for nearly 14 years and in that time they’ve managed to wrack up a respectable discography. Despite all their talent though, they tend to be a relatively overlooked band… especially when compared to fellow countrymen Primordial. With the release of their fourth full-length, it’s time for people to take notice of this Gaelic doom band. Filled with mournful passages and melodic riffs, Damned When Dead will take you on a melancholy-filled trip through the Norman invasion of Ireland.

Don’t let the fact that this band is from Gothenburg, Sweden fool you about the music… The fact that it was mastered by Vassafor vocalist Phil “VK” Kusabs should tell you this is anything but the typical style of metal we’ve come to associate with that area of the world. Grave Ekstasis is 45 minutes of dragging blackened death that blends slow, grinding riffs with occasional moments of frenetic energy. The top-notch production only adds to experience… thick and natural sounding, without become a massive wall of thunder. This is an impressive debut and I look forward to seeing more from them.

I don’t remember exactly how I discovered Zügellos, but I’m glad I did. A one-man band out of Wikon, Switzerland, sole member Mischa Horn has thankfully foregone the typically monotonous style of DSBM that so many solo bands play, and instead has given us a ripping mix of crust punk and Darkthrone-inspired black metal. Horn has a true knack for writing music, excelling at multiple tempos while balancing both of his influences perfectly. This is a good solid piece of music, and as it’s free on Bandcamp, everyone should at least give it a try… you’ve got nothing to lose.

Iron Bonehead had already released a number of fantastic albums this year, so I was actually surprised to see this one slip onto the release schedule at the very last minute. For those of you who don’t know, Iron Dogs is a Canadian band that’s firmly entrenched in the early 80’s metal scene. A mixture of the NWoBHM and speed metal, the band’s influences are all over this album… everything from Angel Witch to Motorhead can be heard in the melodic harmonies and throwback writing style. Fans of this style will find an album more than worthy of their time.

Not to sound like too much of a hipster, but I have been into Lantern ever since the Subterranean Effulgence EP blew my face off in 2011. To say I’ve been really looking forward to this full-length would be a hell of an understatment. Now that it’s finally dropped, I think its safe to say that it completely lived up to my (and a lot of other people’s) expectations. The music has a gritty, raw production that only empahsizes the ominous beats and raging leads. With its cavernous sound and cold, all-consuming atmosphere, this debut album is not to be missed.

Technically speaking… Condor should probably be labled as a blackened thrash band. Truthfully though, their sound is pure 80’s thrash. Starting at a blistering pace, this album doesn’t let up until the final note, filled with awesome thrash riffs the whole way through. Condor are still a relatively young band, so there’s definitely room for growth, but I’d still say this is one of the best thrash albums I’ve heard this year.

Sweden, and to a lesser extent Finland, have always been well known hot-spots for European death metal, but over the last few years Norway has begun to quietly establish a very solid scene all its own, with Kolbotn natives Obliteration leading the way. Black Death Horizon picks up right where Nekropsalm left off, blazing away with rotten, filthy grooves and rolling, doom-inspired passages. If killer, mid-tempo death metal with a late 80’s sensibilty appeals to you in any way, then don’t sleep on this one.

It may have only been a five-song EP, but Ranger made a huge impact this year with their brand of blistering 80’s speedmetal. Filled with shredding guitars and gritty, energetic screams, the music foregoes the idea of an epic sound, choosing instead to use a back-to-basics raw approach that makes Ranger stand out on the very first listen. Knights of Darkness doesn’t do elegant… it’s 20 minutes of simple, driving heavy metal.

Necromessiah – The Last Hope of Humanity…

The band describe their music as ‘Heavy-Powered Death & Roll’, but anyone who’s heard The Last Hope of Humanity knows this is religion-crushing blackened thrash of the very best kind. With a galloping tempo, intense rhythms, and tons of groove, this album is a perfect example of sonic aggression.

Sacriphyx came together in 2007 and, until this year, their entire body of work has consisted of 7 songs, spread over a single demo and a couple of split albums, so this full-length is long overdue. Thematically, the band attempt to convey the feelings of fear and horror that face soldiers in times of war… particularly the men who fought in the trenches of WWI. Musically, they’re much harder to pin down. While initially they come across as a very thrashy death metal band, their catchy sense of melody has very strong ties to the Greek black metal sound. Sacriphyx definitely has an old-school feel to them, but the music itself is refreshing and unique.

Solothus – Summoned from the Void

Finland is synonymous in my mind with death/doom, so it’s not surprising to me that a band from the land of a thousand lakes was able to create an album of such slow-rolling destruction. Filled with crawling mounds of death metal anguish, plodding guitar melodies, and a dark, smothering atmosphere, Solothus are a promising young band who found the perfect blend of death and doom.

At the northwest base of Mt Fuji lies Aokigahara Jukai, a 14-mile forest that translates as The Sea of Trees. An eerily quiet forest, due to the density of the trees and the lack of wildlife, it has a long association with Japanese demons and is a popular area for people to commit suicide… perfect inspiration for a metal band like Thrall. Weaving blasting, black metal passages with slower rock and roll rhythms, this band from Tasmania have created an album of hateful and vicious music with an undercurrent of morbid beauty.

Another late-season release, this year sees the first full=length from Australian war-metal machine Temple Nightside. With the band comprising just two members, Basilysk and IV, both of whom just happen to be members of the equally fantastic Nazxul, there was little chance this album would disappoint. This album is all about atmosphere. Working with an incrediably raw production, the music creates an oppressive wall of sound that completely suffocates the listener. This album is a ferocious bit of nastiness, and only the bravest should check it out.

Tyrant Goatgaldrakona – Horns in the Dark

Altar of skulls – check… Ominous cloaked figures – check… Evil goatman with an unholy book – check and check. The cover of Horns in the Dark tells you exactly what to expect before the first note even plays. Savage and violent, this band worship strongly at the throne of the mighty Incantation. This is a no-frills death metal album. There are no sweeping solos or technical compositions, just simple, catchy death metal riffs. No one will call this a unique album, but with a run time of only 30 minutes it doesn’t overstay its welcome… packing a heavy punch into a compact frame.

Zom’s musical attack is not new, but the subtle additons they bring to their blackened death influences make it brutally enjoyable. True to the style, there’s no real sense of intricacy in the music, but this two-song EP is a veratible tornando of riffs, thundering along between monstrous thrash and raw crushing doom. Multiversal Holocaust is primative-sounding, and requires a few listens, but there’s some great music to be found underneath.