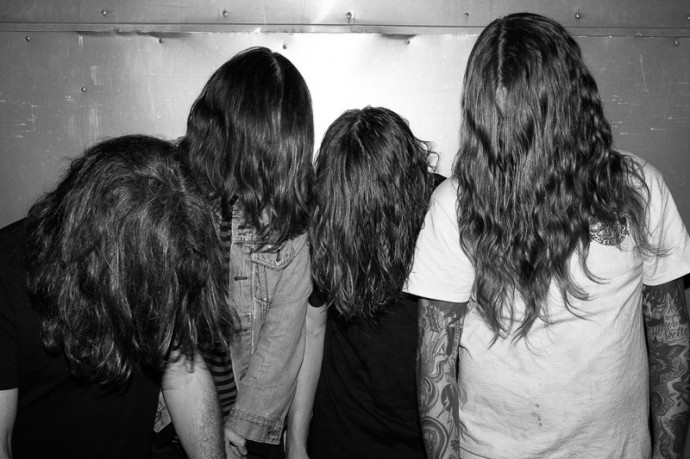 With as diverse a group as Leperkahn, Phro, and Sean Golyer all uttering surprised exclamations about this EP on Facebook, it had “can’t miss” written all over it, right? And on top of that, there was the mention on Obliterations’ Bandcamp page of the members’ musical pedigrees (with time spent in the likes of Black Mountain, Saviours, Bluebird, Night Horse, and Pink Mountaintops) and their love of both Black Sabbath and Black Flag. Also, photos of nuclear detonations.

So, although I’m buried up to me neck in unheard promos and other recommendations that have been gathering dust, I ventured into this L.A. band’s self-titled debut release. With four songs flying by in 8 1/2 minutes, it’s over before you know it — but it leaves its mark. Or rather, it leaves marks, the kind that will scar when the scabs come off.

The music is a galvanizing blend of bolting punk rhythms and fat guitar and bass tone, with gut-pummeling drum beats, rambunctious bass work, and blinding solo bursts. The riffs are immediately catchy and compelling, Sam James Velde lets it all hang out in his enraged vocal shrieks, and the sound quality is damn-near perfect for the hybrid punk/metal animal these dudes have created.

And I’ll just leave it at that, because when it takes longer to read a review than to listen to the music (which you can do below), you’ve passed the point of diminishing returns.

Obliterations was released on 7″ vinyl in October, but that pressing is sold out. Fortunately, it’s also available for download here:

Looks like Obliterations have yet another four-song EP coming in mid-January via the Volcom Entertainment Vinyl Club (hell yes!). So, in addition to giving you a stream of the debut EP, I’ve also included a video of the band performing one of the even newer songs that will appear on the next release. All of this is hot shit.