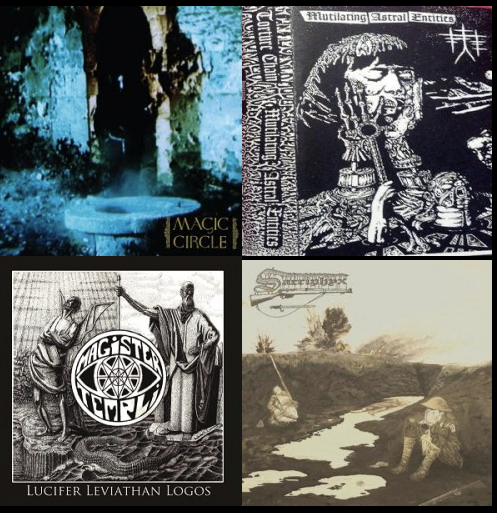 (Guest writer Fork Tongue has already brought us his lists of the year’s best demo’s and EPs, and now we’ve got his list of top songs — with the music streams.)

Let’s put the bullshit aside. Lists are personal preference. Pushing heavy metal forward into a new direction is not in my criteria for any of my lists. Give me good riffs and and a pleasurable experience and I’m going to like your album no matter how many old bands you sound like. Give me songs like these though, songs that stick with me and keep me coming back again and again, and you might have something special on your hands.

10. Beyond – “Definite Decease (In the Chamber of Deathsalvation)”

What a debut. When you can put out your first full-length and have one of the best Death Metal albums of the year in a ridiculously strong year for Death Metal, you know you have a bright future.

One of Metal’s perpetually underrated bands wrote one of 2013’s most underrated songs. Who knew? The version I’m including is live as the studio version on youtube is NOT the right song, somebody labeled it wrong.

I loved the Carcass album when I first heard it. I haven’t gone back to it much so I don’t know how much staying power it has, but this is one song I’ll always go back to.

6. Inquisition – “Obscure Verses For The Multiverse”

I’ve never been a fan of Inquisition. The vocals turn me off. I’m much more into their old Thrash stuff. But recently I’ve given this one a go and I’m digging it. A lot. Possibly due to this song alone. That goddamn riff!

This is one of the weirdest, albeit best, Black Metal releases of the year. This song in particular is something else. I’m no writer, so the best way I can describe it would be “jangly” and “different”. That wasn’t much help, so just take a listen.

4. Magister Templi – Master of The Temple

Another band that came out of nowhere and not what you expect from Norway. This is basically traditional Heavy Metal with galloping riffs galore. The vocals are what makes it though. Clean vocals again here at No Clean Singing and while the vocals aren’t pitch perfect, they do fit perfect. One of my favorite vocal performances of the year although I could see where it would be an acquired taste.

Sacriphyx is a Death Metal anomaly. Somehow they’ve taken a form of music known for bashing you over the skull with intensity and added emotion to it. The whole album takes you through Battles of WWI from the Australian perspective. They managed to tell a story and inject real emotion into Death Metal. Impressive.

Not only my second favorite song of the year but also the best Black Metal album of the year. Not sure how the bad reputation of USBM still exists when stuff like this (and others) is out there.

Magic Circle came out of nowhere to me. A band from my backyard filled with guys who play in 100 other known bands (including Stone Dagger, mentioned on my Demo list) from Hardcore to Death Metal, somehow made a masterpiece debut Doom Metal album and my favorite song of 2013.