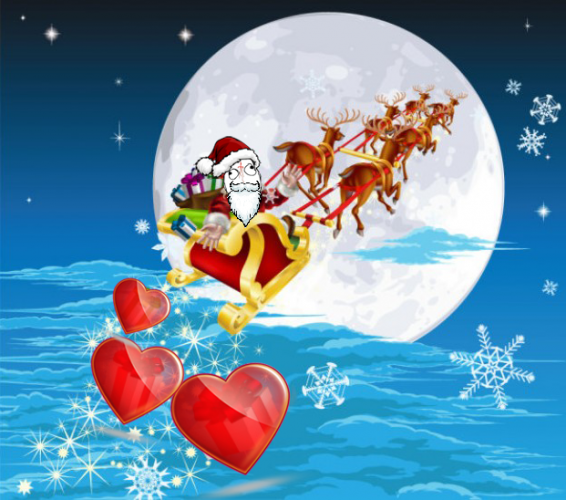 In the spirit of Khristmas, there is no mean, hierarchical list from Happy Metal Guy this year that ranks bands in a certain order of merit. Just like those annoying middle school camps with anti-climactic inter-group games that end with everyone winning, Happy Metal Guy has decided to go along with the festive mood and allow every band whose record he listened to and liked this year to be in its own league. ‘Tis the season to be jolly, altruistic, and spreading some e-love via some blog post that will probably never be read by most of the bands mentioned in it after all. Yohoho, everybody—but Happy Metal Guy—wins!

Some of the category names below might seem negative at first glance, but just know that Happy Metal Guy uses each and every one of those in a negatively positive way. Rest assured that all of the records mentioned below entertained Happy Metal Guy enough to be remembered and shortlisted. Some albums like Shining’s One One One and Thrawsunblat’s Wanderer on the Continent of Saplings were initially going to be mentioned here, but they have since lost their appeal to Happy Metal Guy for some reason.

The Skinny: As one of the pioneers of the Gothenburg death metal style, Dark Tranquillity have always had to meet the high expectations of Scandinavian melo-death fans. But that does not mean that the band compromises on musical evolution for the sake of sating the desires of fans of their past works. Construct hardly resembles any of the band’s earliest (and heavily guitar-driven) works such as Skydancer; it is a piece of musical work well-entrenched in atmospheric melo-death metal territory, with the synth playing a more prominent role in the music than ever. But some sentimental security is still found in the form of Mikael Stanne’s iconic harsh vocals that communicate clearly enunciated lyrics. As a grower, Construct is a record that sounds better and better with more listens, so be patient and give it some time to let its flavor fully develop like wine that is left to age on purpose.

The Skinny: These Swedish Mercyful Fate worshippers bested many big names of metal this year to gain a deserved spot on this list (thanks to vocalist Pelle Åhman’s dreamy, tenor voice). Songs like “Death Knows Where”, “Pallid Hands”, and “Sister” gallop with a rhythmic drive that will make you involuntarily bounce your head up and down like a basketball being dribbled by some NBA star. Look out for that title track: it’s one hell of a stubborn earworm that refuses to wriggle out of your ear canal after crawling its way in.

The Skinny: We all know that thrash metal never dies. But many bands that have kept the thrash metal flame burning in recent years fail to come up with grooves and solos that sound exciting. Happy Metal Guy is not only referring to the random, unsigned thrash metal band from some backward country that has been at it for ten years without receiving much interest from either media or record labels – even titans like Anthrax, Destruction, and Sodom have failed to put out exciting records in recent years. But this year, the American trio of Havok, Skeletonwitch, and Toxic Holocaust have released three excellent thrash records that are packed full of grooovy grooves and/or shredtastic guitar solos. Unnatural Selection’s rhythmically-driven grooves, Serpents Unleashed’s intense black metal fury, and Chemistry of Consciousness’s flesh-dissolving, D-beat attack will all leave you physiologically ravaged and begging for more.

The Skinny: No band beats the dead horse of deathgrind better than these Californian zombies. Even though Necrocracy was spawned in the wake of its excellent predecessor All Guts, No Glory (2011), it still meets expectations exceedingly well. Spin this maggot-infested disc and prepare to be entertained by skull-bashing riffs and guitar licks ‘n’ solos that you will want to air-guitar to.

The Excellent Record Produced By Some Spinal Tap-ish Band:

The Skinny: Here’s a modern NWoAHM (New Wave of American Heavy Metal) classic. To boost its underground cred futher, the Los Angeles heavy metal warriors who forged this masterpiece imploded about nine days into their first tour promoting it, making any completely autographed copy of this record a pricey item on eBay for sure. The Devils Cut is an excellent piece of work produced by a great lineup of yet another revolving-door band that probably has one founding member who still thinks everyone else who left is to blame (and not himself). The 2013 lineup of White Wizzard was perhaps the best the band ever had. Too bad it was as volatile as its previous lineups.

Scale the Summit – The Migration (Prosthetic)

The Skinny: These avid Texans are back to scale the summits of more lofty mountains and shoot for the stars. The Migration is an aptly titled record that brings the listener on a surreal trip through beautiful dreamscapes dotted with stationary animal-shaped trees, and animated tree-shaped creatures. This is meandering instru-metal at its finest, and excellent music to sleep to.

The Skinny: Famous metal geezers are notorious for often putting out new records that fail to impress listeners as much as their older records did. But this year, Darkthrone and Flotsam and Jetsam have managed to buck that trend (Black Sabbath’s 13 and Megadeth’s Super Collider didn’t). The Underground Resistance’s haunting, blackened heavy metal assault and Ugly Noise’s somewhat progressive speed metal journey both prove that one need not give old metal sub-genres overly-fresh twists or engage in generally suicidal crossovers with completely unrelated musical genres to breathe new life into stale metal sub-genres.

The Skinny: You know that sweet joy you feel upon discovering an obscure band who are new to the extreme metal scene and who happen to have some excellent material, or watching an obscure band you’ve been following blossom into a nefariously melodic musical entity? That was what Happy Metal Guy felt when the former happened with Cóndor, and the latter with TOAD.

The Skinny: This is the best studio record in the German sociopolitical metalcore outfit’s discography to date. Balancing a good dose of sonic aggressiveness with plenty of sonic melancholy, Heaven Shall Burn explore an emotional depth unachievable by most metalcore bands. The band are definitely getting more melancholic as they age, and it’s a good thing. All-out aggressiveness throughout any metalcore band’s career is one of the most banal things to witness in extreme metal.

The Skinny: From the Maw of English Extreme Metal Come this Cacophony of Dissonant Alien Cries of Fantastical Hailstones

The Skinny: Tons of Stockholm chainsaw-buzz worship records are put out by underground labels like Pulverised and FDA Rekotz every year, and many of these discs fail to get themselves spun more than once because they sound quite indistinguishable from one another. But Voodoo Dawn has managed to get itself spun many, many times this year due to its musical content, featuring an eargasmic combination of skin-crawling, female harsh vocals, and a moderate tempo that allows Skeletal Spectre’s mean grooves to fully ‘set in’ and induce the boney masses to engage in cranium-caving headbanging.

Attila – About that Life (Artery) [Review]

The Skinny: Like having a blissful cup of celery and bittergourd juice after every excruciating bite of Hershey’s milk chocolate, Happy Metal Guy loves having some guilty pleasures to go with his main fare of overly-serious extreme metal. Playing fun-as-hell rapcore and electronicore respectively, these two records by Attila and The Browning are two of the best of the unmetal metal output this year with which to piss off legions of overly-serious metalheads.

Probably Would Have Rocked My Socks Off Had It Not Been Delayed:

The Skinny: This father-daughter grindcore duo’s Bullies are Mean EP was a brief but insanely fun ride that featured pancakes, Scooby-Doo, and a mid-paced, groovy guitar solo that stuck out (in a good way) like a corpse-paint-wearing black metal warrior on a sunny Hawaiian beach. It left Happy Metal Guy more hyped up than ever over the pair’s upcoming debut studio album, but a tad bit disappointed that it isn’t being released in December as was originally planned.

And last but not least, here are some old records that have been ravaging Happy Metal Guy’s ear canals alongside the ones mentioned above.

Blasts from the Past:

The Skinny: Old-school thrash metal, melo-death-influenced metalcore, blackened death metal, and technical death metal – a pretty diverse selection of old records that Happy Metal Guy chose to listen to frequently this year, if Happy Metal Guy may say so himself. These are excellent records that have withstood the test of time well. Buy them if you haven’t already done so.