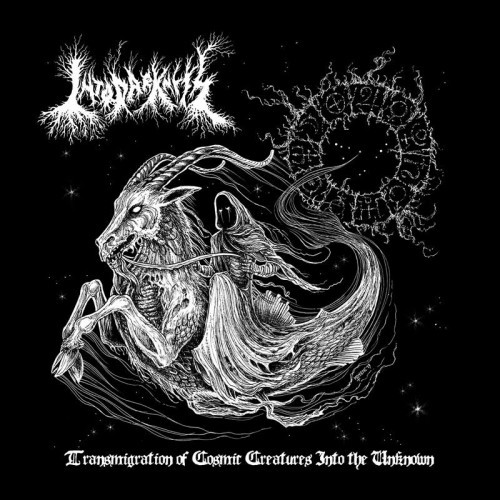 After only one listen, I proclaimed the debut demo by Italy’s Into Darkness “one of the best death/doom releases of 2012”. I wasn’t alone — the surprising first effort of this new three-piece drew praise from many quarters. Now, after a change of line-up, they’ve followed that auspicious start with a new 7″ EP entitled Transmigration of Cosmic Creatures Into the Unknown (also available for download on Bandcamp), and it proves that the 2012 demo was no fluke.

Vocalist/lead-guitarist Doomed Warrior is the only surviving member of the band that produced that demo — now joined by Ken Hunakau (also a member of Fuoco Fatuo) on bass and rhythm guitar and drummer Pide Guts (Necro) — but the new release proves she was (and is) the heart and demonic soul of this band. She still sounds like she was separated at birth from Martin van Drunen, despite being born more than 20 years later, and if anything her voice has grown even more depraved and destructive since Into Darkness’ first outing. And her songwriting and guitar work are equally striking this time around. 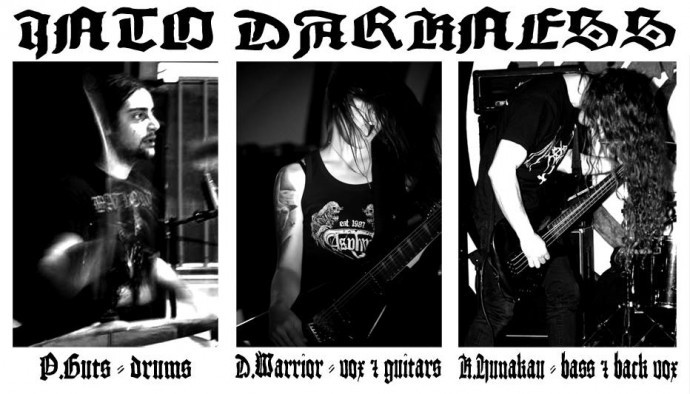 Transmigration consists of two songs. The first one, “Dreadful Omen of a Dark Millennium”, appeared in rough form back in August (discussed at NCS here). It starts like a horde of vampire bats disturbed from their slumber — a black flurry of clawing riffs and punchy drumbeats — but eventually falls into an eerie crawl and then a tank-like grind before accelerating toward the finish. It’s both bleak and blasting. It stinks of the crypt but is radiant with unholy energy.

The second song, which shares the title of the release, has an even more galvanizing, hard-chugging intro than the first track and exhibits the same kind of dynamism, with crushing doom stomps trading places with jagged, jarring riff attacks. It’s a headbang-worthy assault marked by a particularly bone-shattering drum performance.

The day will come, I fervently hope, when Into Darkness deliver a full album, because I’m greedy for more of what Doomed Warrior and her comrades are doing. But in the meantime, this new release makes for a very nice year-ending present, from hell to all of us.

Transmigration is available for order now, on 7″ vinyl, through Doomentia and it can also be downloaded from Bandcamp using the link below. The eye-catching cover art is by Chris Moyen.

5 Responses to “SHORT BUT SWEET: INTO DARKNESS — “TRANSMIGRATION OF COSMIC CREATURES INTO THE UNKNOWN””