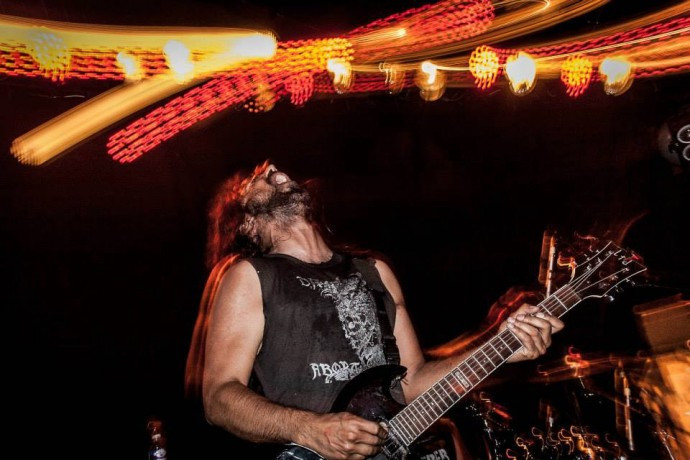 (I asked Topon Das, founder and guitarist of Canadian grind marauders Fuck the Facts, to share with us some of his favorite releases of 2013, and here are his thoughts about four of them.  And if you want an interesting change of pace, check out the latest release by another of his projects, Merderahta.)

Gorguts is one of those bands that really have no room for a dud and even a good album has a hard time sticking out in their strong discography. Colored Sands isn’t going to usurp Erosion of Sanity as my favorite album of theirs, but it is really nice to hear Luc Lemay still making great mind-bending metal in 2013. There are a lot of really great riffs and ideas that might seem complex on the surface, but falling into their groove is  still extremely easy. This has always been one of Gorguts’ strong points.

Obviously, the addition of the new members has made a huge difference, with a lot more studio “tricks” and ideas being prevalent on this album and even a “modernized” approach to the song writing and structures. My only qualm about this album is that I found it a bit long, and I do have a hard time listening to the whole thing from beginning to end, but I felt the same for their album Obscura. One thing I do love though, is the very dynamic and warm production. Good on you Gorguts for smashing us with awesome music and not just sheer volume.

Subrosa – More Constant The The Gods

Subrosa seem to have calmed down a little bit since they released No Help For The Mighty Ones, and this took me a little bit to get used to. I really enjoyed their previous album and was expecting a continuation from there, but Subrosa have taken it back a few steps and mellowed out with what almost sounds like “shoe-gaze doom” at some points. This isn’t a bad thing, and once I got past wanting to hear NHFTMO part two, I was easily able to enjoy it as a different animal.

This is one hell of a comeback record, especially considering that their last album came out in 1996! One thing I have always loved about Carcass was the amazing evolution of the band. Listening to Reek of Putrefaction and then Swansong, it’s really trippy to hear the growth and development of these 3 gentlemen, and even though I might not love every album, I always loved the fact that they seemed to do whatever they wanted and not just what their audience was expecting.

Surgical Steel definitely takes a step back to the Heartwork-era of the band, but I do notice a hint of my personal favorite album Necroticism as well as Swansong. Everything is intact, with extremely catchy riffs, melodic solos, and Jeff Walker’s scratchy vocals. Even though Ken Owen is understandably not on this album, the new guy does a good job of paying homage to Ken’s style, which is something I always thought was extremely important to the Carcass sound. The only thing we need now is Bill Steers’ guttural vocals and I’ll be happy.

In a death metal scene where it’s often hard to tell the difference from one band to the next, Malignancy have managed to carve out a nice little niche by mixing brutal death metal with what almost seems like “free form” technicality. The first thing I thought when I listened to this album was that these guys are having fun, and it really shows. It’s hard to keep track of what’s going on sometimes — even when one song ends and the next one starts — but everything flows smoothly, and you can really tell that the guitarist and drummer have locked into a comfort zone that has been in the making for years.

You fall into a groove that’s almost like dodging bullets while listening to this album, you’re not sure where the next one is coming from, but you always manage to move your head just in time. Add to this the most balanced and cleanest production Malignancy has ever had, and I’m pretty sure they have just released their finest album to date.