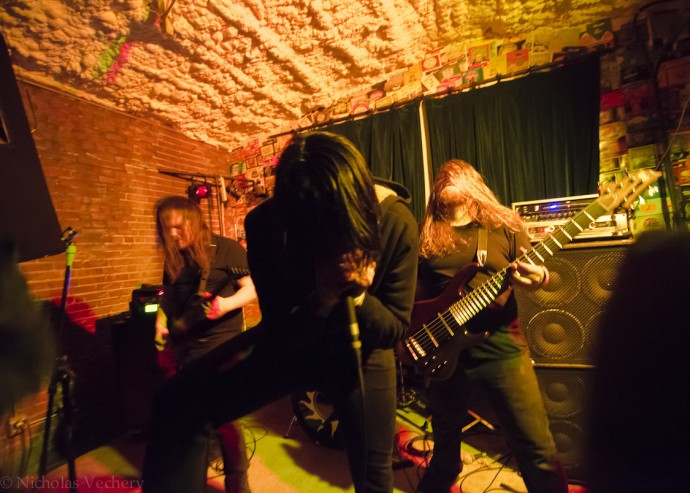 What better way to ring in the new year than to absorb potent heaps of aural filth. Upon getting to the show way too early, the thought occurred to me that the bitter near-freezing cold was a perfect grim fit for the long night of black metal ahead. Through talking with fellow fans, Nik and I figured out we had competition, as Rhys Williams from Invisible Oranges and his photographer were covering the show as well. This is what it’s like when metal blogs collide — cue Powerman 5000! Consider as proof that Anagnorisis are a band worth following, that others besides me and my questionable taste wanted to cover the show as well.

Before this show I was unaware of Sounds Of Laughter. They constantly switched between numerous styles, with some more effective than others. They were more effective when pulling off punishing grind than when trying to meld together black metal, crust, death metal, doom, and drone. Sometimes it worked when they did the everything-and-the-kitchen-sink approach, but often it felt loose and not as powerful as it could have been.

The theatrical performance of their vocalist was a definite plus, especially his random excursions into the crowd to push unexpecting people, writhe on the ground, and make some crazy faces while throwing fake blood into the mix as well. Kudos, good sir, on being a crazed motherfucker, GG Allin style. If Sounds Of Laughter can improve the way in which they weave genres together, connecting the pieces together more fluidly with better transitions, they could be onto something special.

Having previously written about Order Of Leviathan here at NCS, I was pretty excited to get to see them, and they did not disappoint, expertly delivering the intensity and precision of their recorded material in a live setting. They began by lighting candles, and the stage was set for a dark ritual, an exorcism of hatred muddled with lonely longing that spewed forth from tracks off their debut EP The Infernal Path To Total Darkness.

It was an amazing experience to hear the opening track and my favorite of their songs, “An Endless Dusk”, performed with harrowing precision, and the other tracks proved equally enjoyable, including the epic ghostly closer of “I Do Not Belong In This World”. Not even a transformer blowing part-way through their set could stop them from raging, as they promptly came back from power outage oblivion just as livid as before. They sounded shockingly tight, which was something of a surprise, given that they haven’t been around long as a group and haven’t yet played many shows. As I found out, they had new members playing as well. Although they sounded very close to how they sound on the recording, the low-end addition of their bass player gave them a beefier, fuller sound live than on their EP. 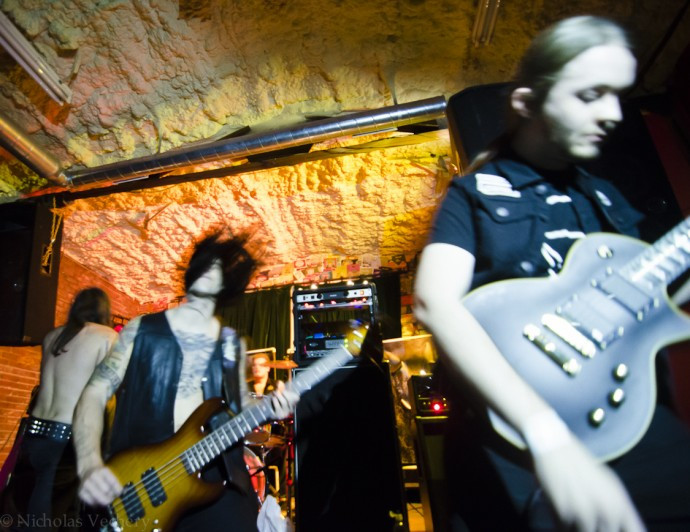 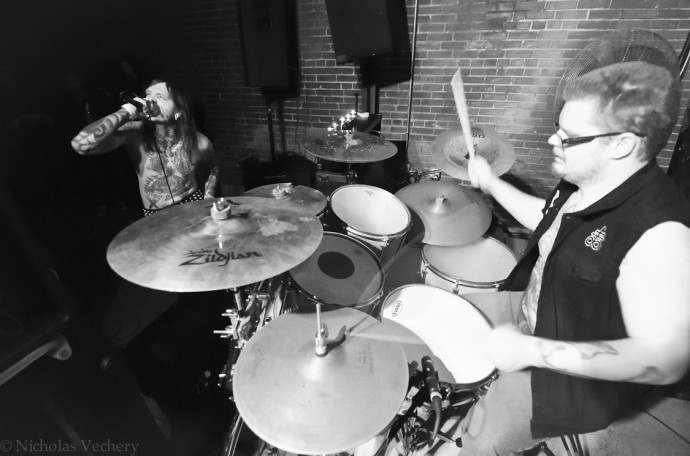 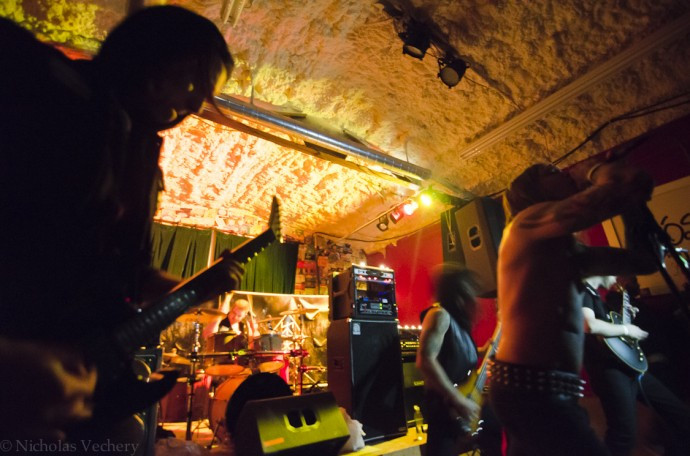 While I was familiar with the name Esoteric Burial, I hadn’t heard anything by them or seen them live before this show. I was in for a surprise of powerful bestial vocals and ripping black metal meets death metal eruptions, blasting by at punishing speeds. Esoteric Burial was savage and brutal, with equal parts black and death fighting each other in a sonic implosion. A new song they played called “Sea of Trees” really blew me away, as it painfully explored a doomy melancholic vibe that was both disheartening and enlightening all at once. 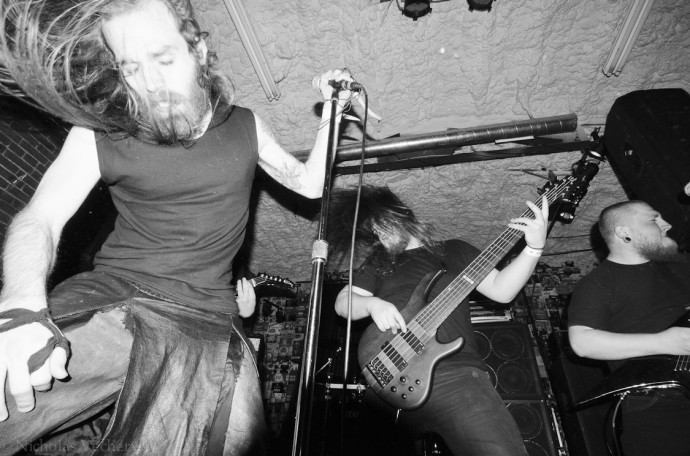 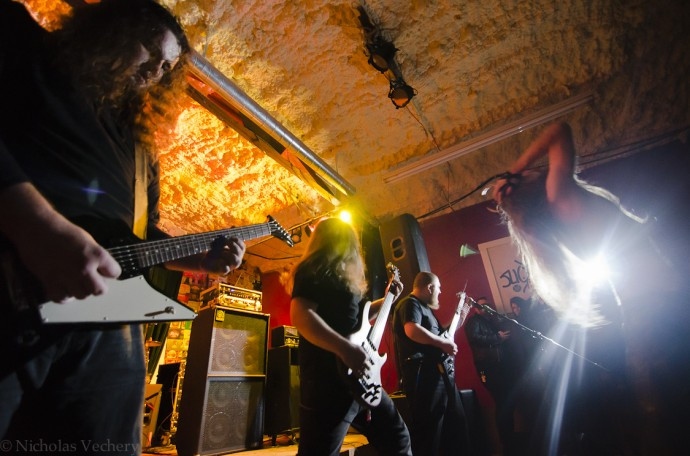 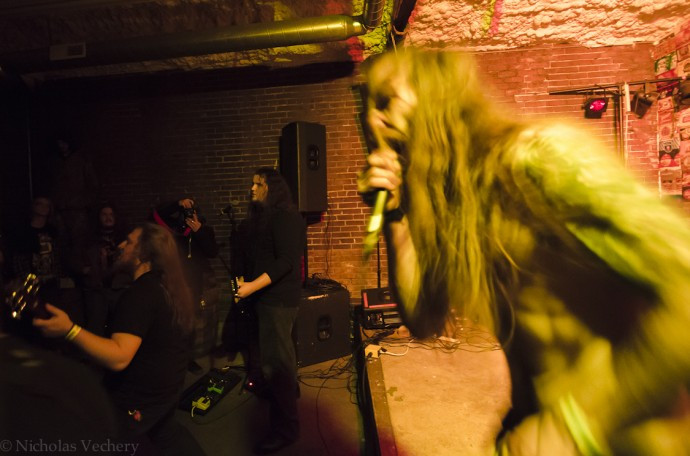 Anagnorisis cover a wide spectrum of varied black metal influences, along with hints of death metal, that when combined with their symphonic arrangements makes for a powerful and grandiose aural experience.

Symphonic-laced black metal is a fickle thing. If recorded and integrated poorly, the keyboards can overtake the guitars in the mix and become the focus of the sound. However, Anagnorisis use keyboards very well, in a soundscape sort of way, and they also utilize some interesting instrumental samples such as horns and sax that lend a dual morose/epic atmosphere to their music.

Lingering between their vicious outbursts are morose building passages that fill out the space of most tracks beautifully. I was especially excited to witness the hateful assault of my favorite track “This Cursed Blood”, and it met my high expectations, especially since it came right after the set’s opener, “Eulerian Path”, which was great except for the fact that the vocals were hard to hear due to the sound of people running sound that night fucking up. By the time they got set to play “This Cursed Blood”, Zac had to grab the other microphone that had been set up for bassist Josh Mumford to do backing vocals, so there seemed to be an extra pissed-off intensity when he could be heard for the first time belting out the venomous words of “This Cursed Blood”.Unfortunately, this meant that Josh’s growled vocals went unheard on the many tracks in which he has a vocal role.

I walked away from the experience of their live devastation battered and blown away — especially since Anagnorisis played Beyond All Light in its entirety, a feat they had not previously performed and which they said they may never do again. That made the experience even more special, as rarely do we as music fans get to see bands tear through an entire album live.

This was a killer show with great performances by all the bands, each performing with a multi-faceted approach, switching between moods of aggression, melancholy, and majesty with skillful ease. Attending the show made me even more proud to call Louisville home. It has been such a pleasure to see our metal scene flourish, with more and more quality acts emerging here in Louisville, KY. 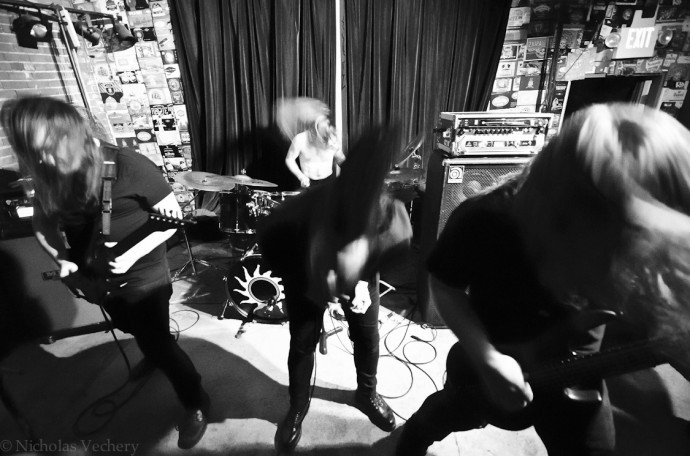 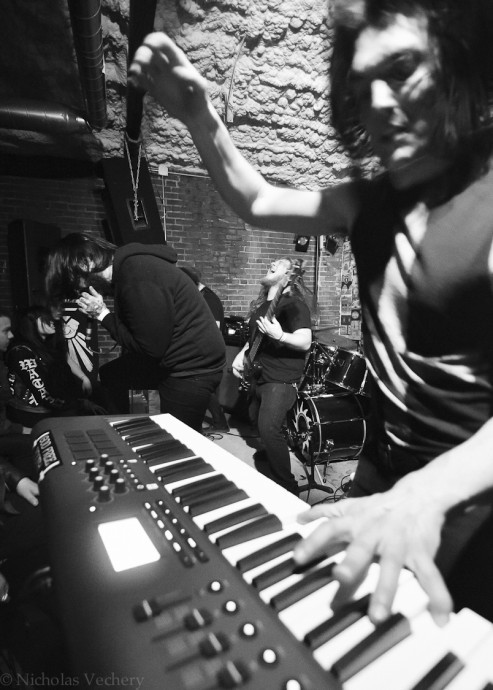 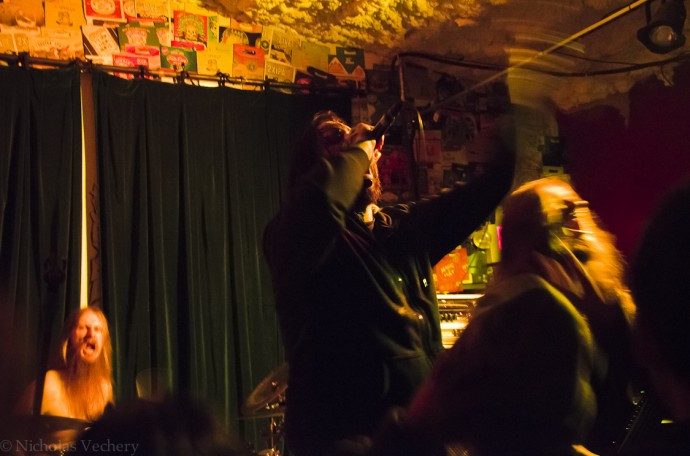