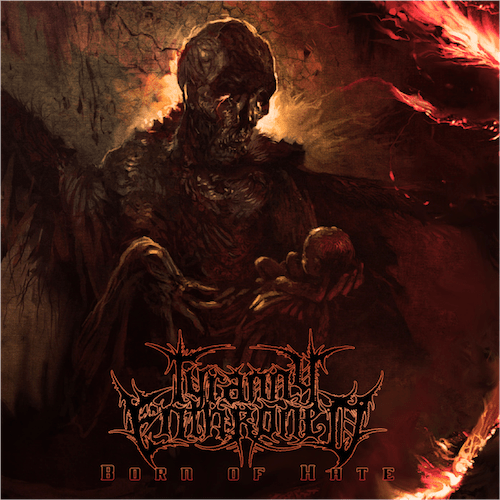 (TheMadIsraeli wrote this review of the 2012 debut album by Tyranny Enthroned.)

“Polish imperialism meets American grit” is pretty much what sums up Tyranny Enthroned on their debut Born of Hate.  They hail from St. Louis, Missouri, and their blistering brand of caustic blackened death is a solid, tried and true approach by a band who’ve got their songwriting chops honed and fine-tuned like long time vets.  This shit is like a sonic napalm run, hell from above and below, with all the ferocity and dignity of a chimera of legend.

The band is a four-piece comprising front man and guitarist Jesse McCoy, bassist Anthony George, drummer Steve Lee, and second guitarist Winston Alvarez (Alvarez is credited as “session/live guitarist” on their Facebook), and together these guys bring it fucking hard.  The Polish imperialism meets American grit statement can be basically broken down to this: Polish speed, melody, and percussive excess, accompanied by more American technicality and explosive attacks.  They bring the two worlds of the pristine royal Polish sound and the American unrestrained violence together very well, creating a debut that is, to say the least, impressive. 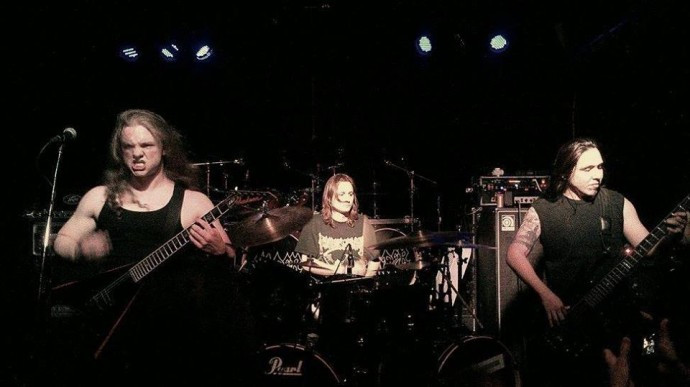 The most impressive thing for me is the way the Polish and American tendencies intersect in the riffing department.  This results in the riffs, and the music as a whole, having very much an “overlord” kind of feel to it, the epitaph of a warlord in blood-and-guts-soaked fury.  Credit has to be given to Jesse McCoy for being a pretty badass guitarist capable of crafting some molten fire breathers, riff-wise.  His voice is typical Polish power grunts, if I dare call them that, bringing to mind Nergal and other Polish vocalists.

Credit also has to go to Scott Fuller of Abysmal Dawn for the organic, dank, and meaty mix of the record.  It achieves a barbaric level of impact that helps communicate Tyranny Enthroned in their element.  “Barbaric” is really the ideal word for their music, and the mix is completely one with the music itself.

A late find, but one I’d definitely recommend.  I’m interested to see what these guys do next, because this is top-shelf grade-A death metal meat if I ever heard it.  Enjoy the songs released below, including the album’s epic finishing blow and my favorite song, “Ritual of Algol”.

UPDATE: The album can now be downloaded via the Bandcamp link below, and three songs are streaming there as well.