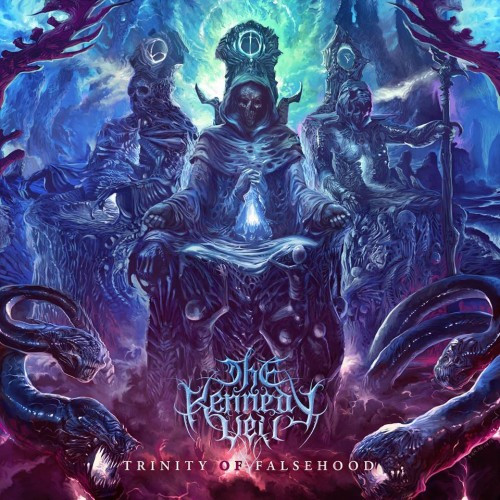 (DGR reviews the new album by The Kennedy Veil, which is being released on January 21 by Unique Leader. Stream the full album at the end of the end of the review.)

Every city has its own musical niche and story to tell. Sacramento is no different. Our heavy metal scene has grown and shifted into a thrashing beast over the past decade. Instead of the kind of city that seems to produce one big band per decade, it has become one that has delivered some of the heaviest groups out there, making Sacramento something of a force to be reckoned with.

We may not do ambient too often, but it seems that right now Sacramento has decreed that we can do brutality with the best of them and that we eat death metal for breakfast. It was in this atmosphere that The Kennedy Veil was founded way back in 2009, a group that served in part as a reaction to the -core side of metal invading the death metal side a little too much for their tastes. While they never fully eschewed that sound, the group became known as one of the faster and more technical death metal bands out there.

They released an album in 2011 entitled The Sentence Of Their Conqueror, and it was on the strength of that, as well as a relentless live push, that the band signed with Unique Leader — which honestly felt like a forgone conclusion, because if there was a label that the band would’ve slotted right into, it was the young upstart Unique Leader. 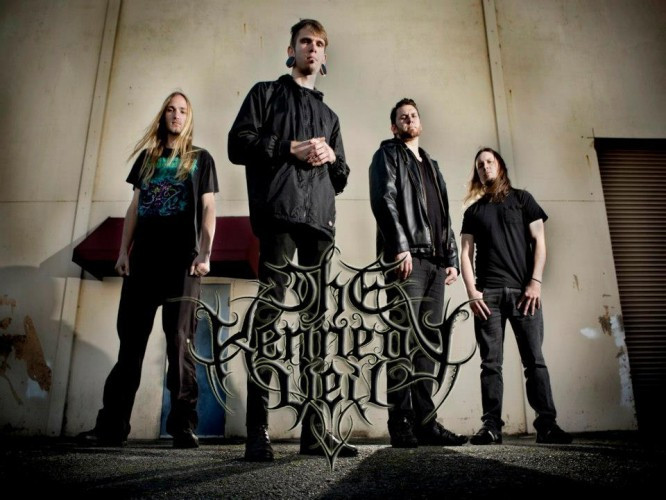 2014 brings the release of the group’s second album, Trinity Of Falsehood, although this disc feels like a re-launch for the band. They have a new frontman, some insanely awesome artwork, a slightly more ornate logo, a new view on their music, and a sense of speed that the group clearly felt was too slow before (a whole CD lasting 22 minutes?! That’s too long!) and is now adapted to go even faster. With Trinity of Falsehood, it appears The Kennedy Veil are aiming to put themselves at the forefront of a burgeoning tech-metal scene that is rising out of Sacramento, as well as the greater expanse of the State of California. It’s an epic and ambitious goal, and Trinity Of Falsehood is a flag planted firmly in the ground as an opening statement that you’re going to be hearing a lot more about these guys real, real soon.

The Kennedy Veil move through Trinity Of Falsehood with a ruthless efficiency that you don’t hear too often in the technical death metal sphere these days. I have a feeling that you’ll see a lot more of this type of death metal coming out soon, one that is pared down to its utmost essence, with much of the pyrotechnics left by the wayside. Rarely do the band go beyond the three-minute mark, instead dishing out bombing run after bombing run of blastbeats and guitar riffs.

Many bands are content to pull off as many different moves with their guitars as possible, and although it can still be an impressive accomplishment, some groups lose themselves in the morass of trying-to-impress technicality without worrying too much about the composition of the songs. The Kennedy Veil tread a very fine line, with enough to show off and call themselves a tech-death band, but the group could also just as easily move below the deathgrind umbrella next to a band like Misery Index and a little closer to Aborted’s usual speed than they may have even aimed for.

Trinity Of Falsehood is a complex disc without requiring the listener to have a college degree in music to understand it. You could probably use it as a gateway album into the more technical bits of the genre, because The Kennedy Veil move so fast that it’s rare for a song to stretch on to the point of an actual challenge. “Eulogy Of The Divine”, for instance, weaves its way through multiple riffs in a span of just a tad over two minutes, with some subversive melodic lines buried in it, on top of the battering ram of a rhythm section, and the vocals seem to be going move for move with each riff, like two martial artists squaring off for dominance.

As crazy as it may sound, it feels like The Kennedy Veil decided to let Trinity Of Falsehood be steered by the dominant performance of drummer Gabe Seeber — who comes through clear as a bell on this disc, each bass drum hit pushing whatever stereo you have to its booming limit; it sounds like you have a train running through your house. The dude just makes what he does seem insanely easy (those blasts in the back quarter of “Perfidia”! My goodness!) at the drop of a hat switching from rhythm to rhythm right as the guitar riffs do. And that’s not to discount the fact that guitarist KC Childers (of Forktung — been a long time since I’ve come across that name!) is a guitar riff machine on Trinity Of Falsehood. It’s riff after riff built upon a foundation of brutalized bodies and it never overwhelms, just moving with a watch-like reliability. Tick, Tick, Tick becoming Riff, Riff, Riff.

Within the gatefolds of Trinity Of Falsehood lies a surprising highlight, and that’s the bass work of long-time bassist Shawn Peterson. While it isn’t noticeable immediately in the opening tracks, it doesn’t take too long for his bass playing to quickly become the complement to each guitar riff. “Beneath The Shroud of Atonement” is one of those rare songs where the guitar playing actually takes a backseat to the bass guitar as he just moves effortlessly across the fretboard. It’s clear that The Kennedy Veil have the bass sound that people come to tech-death for down, pulling off some really stunning stuff as the disc goes on.

The instrumental section of the band are at the top of their game from song to song, meeting and exceeding many of the requirements that a band need to hit in order to stand out in the genre and actually becoming one of the more approachable groups on Unique Leader’s roster.

New vocalist Taylor Wientjes handles his job capably, his range usually in a mid- to low growl and delivered with enough clarity that it doesn’t take too many passes to catch on to what he’s saying. He fits the band’s sound well, and the high screams that he kicks out are really passionate and soar on top of the rumbling group of musicians behind him. They double him some backing vocals for the occasional two-pronged approach, but most of the time The Kennedy Veil exist as four separate pillars, combining into one vicious, surgically precise whole and producing a no-bullshit, no holds barred tech-death album.

The pared-down sound that rarely includes solos but has a million guitar leads can inspire a few comparisons to Gorod, but the band have a real grind sense to their pace, like they had to kick these songs out as quickly as they could and then get the fuck out before someone caught on to them. It results in quite a few repeated spins of Trinity Of Falsehood before you notice the album is repeating itself — an evident sign of some of the depth that can still be achieved by just four guys.

In a little over half an hour Trinity Of Falsehood ignites a good explosion of music. There’s very little fluff and the group rarely fuck around. They’re a laser-guided missile of death metal focused only on their target, and nothing gets in their way. They blast and hammer through eleven songs in the time when many bands are still fucking around with their four millionth scale and guitar solo; The Kennedy Veil demonstrate that they have no interest in that. They pull off complicated things with seemingly no effort, and despite their overwhelming blastbeat-love, they are still pretty approachable. They bridge the groove-oriented side of death metal and the odd-time-signature-flavored, weird-riff side of its technical brethren to create something that switches between the two at a pin’s drop.

Coupled with its fucking awesome artwork, Trinity Of Falsehood is a great kick-start to the band’s career, one that hopefully will pave the way for even more music in the future and one that shows people that on top of all the technicality in the world, it helps when you can actually compose a song every once in a while. Trinity Of Falsehood has the worming guitar riff and insane songwriting in spades and although you may not notice at first, it is one of those albums that has some serious depth, which at just a tad over half an hour can lead to multiple listens effortlessly. Trinity Of Falsehood is a good investment of your time and your money.

8 Responses to “THE KENNEDY VEIL: “TRINITY OF FALSEHOOD””