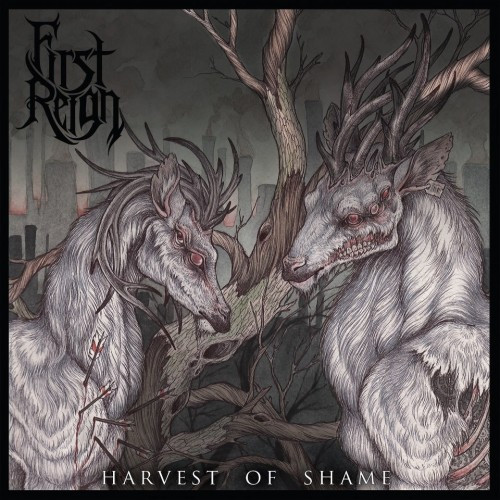 (In this post TheMadIsraeli reviews the debut album by First Reign from BC, Canada, and we bring you the premiere of a full-album stream.)

What a beast of an album.

Non-European melodic death metal that’s REALLY good is really hard to come by. It always has been. For every one band from somewhere else, you could name three European bands of at least equal weight. First Reign are a Canadian band who I believe are at the head of the class of what they do. I’ve covered them before, reviewing their debut EP, but with the band’s debut album, Harvest of Shame, they’ve undergone a transformation. They are more technical, more progressive, and with a much darker tonality.

Imagine the ferocity of At the Gates, the guitar acrobatics and power-metal clean interjections of Into Eternity (pre-Stu Block), and a Death-like sense of composition, combined with some traditional death metal carnage, and you have First Reign. Harvest of Shame is a bleak, twisting labyrinth of melodic death metal might. The band’s seamless integration of their various influences and their commitment to producing melodic death metal that is truly their own is astounding. I’d be hard-pressed to name any one band who truly sounds like this one, even though I can rattle off the names of others who have laid the groundwork for their sound.

The album’s opening is a torrent of rage and agony. “The Reaping/Death with Regret” opens up with melancholy piano. The deathly waltz of dual-guitar dance that follows becomes an elegant massacre, a wolf of demonic origin tearing the entrails out of its hapless victims. And “elegant massacre” is a description that really applies to all of Harvest of Shame — it never lets up once. From the technical ballet of “Severed Inception” to the straight-up death metal blitzkrieg of “A Will Into A Way”, First Reign know their metal and how to craft it exceedingly well.

We have the honor of premiering for you a full stream of this album, and I think you guys will enjoy it immensely (including the mix, which sounds like it’s straight out of 1997). First Reign should be on your radar screen. They’re definitely on mine.

Harvest of Shame will be released on January 21, 2014, and is available for pre-order now, via the Bandcamp link below.

9 Responses to “AN NCS PREMIERE: “HARVEST OF SHAME” BY FIRST REIGN”