Collected in this round-up are a few new videos and songs I came across over the last 24 hours that I thought were worth your time. This is the first of a two-part “Seen and Heard”. More recommended new things will appear later today.

I’m a big fan of Finland’s Stam1na, but despite the fact that I really do enjoy their music, I always finding myself writing about them because of their videos (previous posts collected here). And I write about their videos because they’re so damned funny. And here I am again, writing about yet another Stam1na video — but not for the usual reasons.

This one premiered yesterday (credit to TheMadIsraeli for tipping me to it) and it’s for a song named “Panzerfaust” from their new album SLK (due for release on Feb 7). Man, did I get a surprise. First, the song hits like a blowtorch opened all the way up — a jolting piece of jabbing, hammering, thrashing mayhem with a swirling finger-tapped guitar melody and a stomping martial finish. When choral voices and militaristic chants aren’t being heard, Antti Hyyrynen’s vehement voice is raking like sharpened claws.

The black-and-white video is as well-done as all the other Stam1na filmography I’ve seen, but it’s not humorous, not even a little. (SLK can be pre-ordered here.)

Noctem are from Valencia, Spain. Their 2011 album Oblivion was a favorite of this site (Andy Synn reviewed it here and named it to one of his lists of 2011’s top albums). Like Stam1na, Noctem also now have a new album on the way. The title is Exilium and it’s scheduled for release in North America on March 3; the eye-catching cover art you see above was created by Edmundo Saiz.

About one week ago Noctem began streaming an advance track from the album named “Eidolon”, and I finally caught up with it last night. It explodes with percussive ferocity, bestial roars, and winding riffs. Equal parts thunderous death metal and ripping melodic black metal, the music has an air of monstrous grandeur counterbalanced by a dark, swirling guitar melody — and it includes a brief, surprising acoustic interlude. Absolutely riveting stuff. Bring on that album!

Noctem have also released a worm-ridden teaser video for Exilium, and I’m including that below as well. 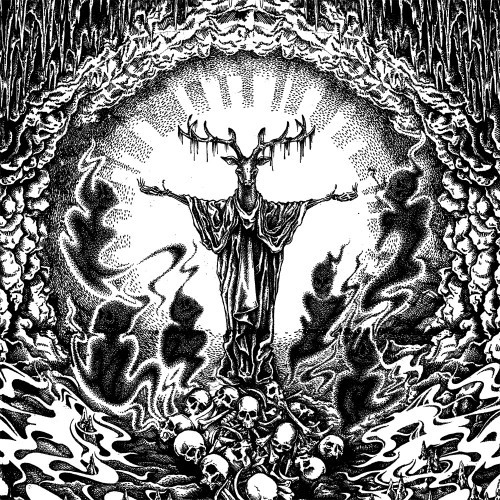 Black Mask must get tired of Groundhog Day questions. You see, they hail from the borough of Punxsutawney, PA, which is ground zero for the event.  Perhaps this explains why their mix of hardcore and metal is so unabashedly destructive.

The band came together in the spring of 2012 and their self-titled debut 7″ was released by Get This Right Records, and that was followed by a full-length album. Now they have a new six-song 7″ inch due for release by the same label on February 4 entitled Lost Below.

Recently they began streaming one of the new songs — “Tormented” — and I was drawn to it by the new EP’s cover art (above). “Tormented” rumbles like a massive, corroded tank, screeching and belching smoke, fueled by thick fuzz-heavy riffs and raw, raucous vox. And if you’re not banging your head mercilessly by the end, I’ll be surprised. My one complaint is that the song is too short. Check it out below, and to pre-order Lost Below, go here.