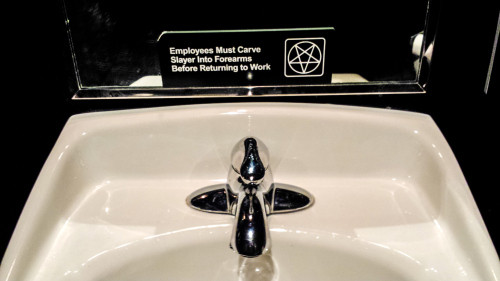 (Mike Yost is a good dude and a good writer (check out this blog here), but he is from Denver, and this week it’s really hard for me to be civil to people from Denver. Because of that sportzball thingie that’s being played on Sunday. But I’m a big fan of metal bars, and so Mike’s piece about his visit to one in Denver overcame my instinctive desire to nuke the city. Besides which, the Broncos are already in NJ, so that would be a wasted nuke.)

So, why not cultivate that vicious amalgamation into a metal bar that serves craft beer?  Well, a few Denver entrepreneurs did just that, opening a brewing company called TRVE, the bar rooted just south of downtown Denver on a bohemian stretch of asphalt called Broadway.

“Our goal is to give you a rad place to hang out and drink killer beer,” their website reads.  “ . . . Our mission has always been to create beers that are beyond the pale. To us this implies new ideas, channeling Loki, and embracing chaos. It means drawing from the sounds and sights that inspire us most in life.”

They used the word rad.  How fucking rad is that?

I dropped by TRVE with some friends to drown my brain in more than a few  hellishly fermented beverages (and only after, of course, we sacrificed a few humans to Loki).

I met an awesome barkeep named Shayna (sorry if spelling is off), who let me sample a few of TRVE’s brutal brews, including Grey Watcher—a Grisette-style farmhouse ale.  It had a strong sour taste that complemented the beer very  malevolently. 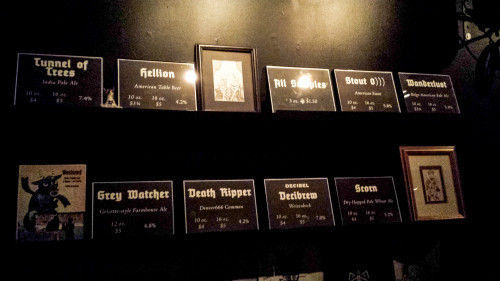 Next was a sample of Death Ripper—an amber(ish) ale.  Indeed, the drink plunged into my stomach and ripped apart my dark soul, so I ordered 16 more ounces of that wonderfully fiendish refreshment.

As I was sipping away on my hops, I asked Shanya how she got into metal.  Shayna told me that when she was a wee-little kid, her mom would play Judas Priest records.

Shanya added that her mom recently battled cancer and was victorious.  In honor of her mom’s conquest, Shayna had the words Judas Priest tattooed on her arm, the letters in pink (the color for cancer awareness) outlined in black.

And it wasn’t long after our conversation that I heard Judas Priest’s “Between the Hammer and the Anvil” blasting out of the speakers above the bar as I gulped down the rest of my Death Ripper.

Being a Saturday night, the bar was packed with assorted groups of revelers.  There were (of course) small clusters of metalheads, but I also saw a small pack of punks, a few gaggles of “hipsters,” and even a faction of yuppies—all enjoying the solidarity of those who embrace beer and metal and human sacrifices to Loki. 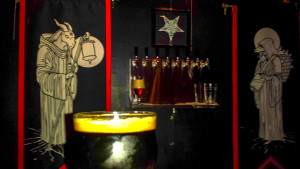 Normally I would feel tremendously uncomfortable sitting in a crowded bar, but Sepultura’s “Slave New World” calmly truncating  my apprehension.  I was even slamming my head forward a few times, careful not to knock over my brew, lest I be charged with alcohol abuse, dragged out behind the bar, and beaten to death with giant pixie sticks—as is the law in Denver.  (We take our beer very seriously in the Mile High City.)

It was when I was eating my stout that a black metal band out of Norway called Urgehal began trouncing TRVE denizens.  Songs from their album Goatcraft Torment tore out of the speakers and fed greedily off the beer-soaked flesh at the bar.

But the most savage facet of TRVE is their strong support for local talent.  Not only does the bar display local art on the walls, but the brewery collaborates with Flatline Audio, a Denver studio that churns out (among other music) metal. 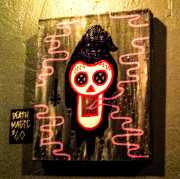 “Recording time ain’t always cheap,” TRVE’s website reads.  “And there are killer bands out there fighting tooth and nail just to break even. We wanted to help these people out and get their music heard.”

That’s pretty fucking metal if you ask me.

The Denver band, Black Sheep of Kali, recorded two tracks through this collaboration.  You can download the songs for free at their Bandcamp page:

So, if you ever end up in Denver for a metal show (or to legally buy some pot), definitely check out TRVE.  Just be sure you sacrifice a few humans to Loki before you walk in the door.