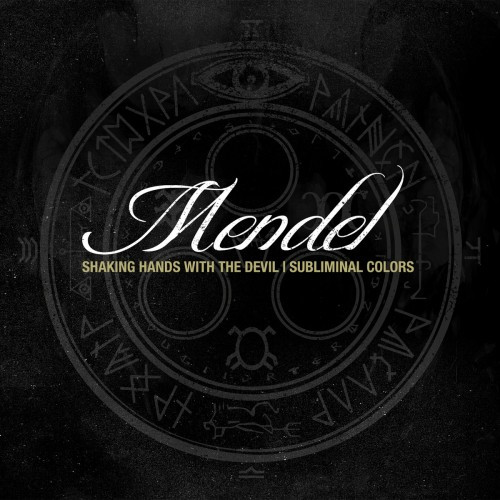 Mendel Bij de Leij, or simply Mendel (to use his musical output moniker), is currently doing the heavy-lifting ax duties for Aborted.  I mention this because his solo musical endeavors show a completely different side of this Dutch guitar virtuoso’s musical palette.  When Mendel isn’t cranking out the death metal riffage with Aborted, he likes to spend his time composing instrumental metal of a heavily neo-classical variety.  Mendel’s sound may be metal, but his sense of composition is heavily rooted in both the Baroque and Romantic periods.  While the songwriting itself and the melodic character is Romantic, Mendel fully epitomizes Baroque’s tendency for pure unadulterated excess.  This is very true for the music contained on Shaking Hands with the Devil/Subliminal Colors.  Breathing room is an extreme rarity, and there are often layers of three to four guitar tracks present when the need arises, which is quite often.

This is a guitar album, make no mistake about it.  As a showcase of Mendel’s instrumental skill, as well as his songwriting talent, it’s mind-blowing to me.  Other than Mendel, only Jeff Loomis and Keith Merrow are making instrumental extreme metal this exciting to listen to.  The neo-classical leanings are conveyed through a combination of thrash, melodic death metal, some Meshuggah-esque, jarring, syncopated grooves, and a lot of solos.  The music on this album is pretty consistent, which also is to say that if you’re expecting a flagrant display of diversity wank, then this isn’t the album you want to hear.  It’s pure, utterly bathed in its influences, and does little to stretch those boundaries, which is perfect.  Not one song is bad across these sixteen songs, not one solo is uninteresting to listen to, and that’s true even of “Absolution”, the twenty-five-minute closer. 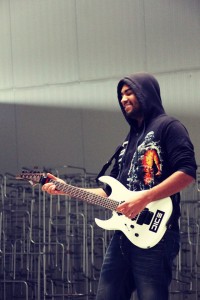 This release is in fact two releases.  The first six songs are an EP of new music (the title track having been released last year as a single), and the last ten are a remixed, remastered version of Mendel’s first album Subliminal Colors (which badly needed a tune-up), mixed to fit the production of Shaking Hands With The Devil as closely as he could.  It’s a bit of an odd listen, I’ll admit, because Shaking Hands with the Devil is definitely evolved in comparison to Subliminal Colors, opting for a heavier, faster direction with guitars tuned lower.  Subliminal Colors is still great though, and is an intoxicating listen all on its own.

Listening to the solos and lead work on this album is a treat.  There are so many hooks and reoccurring themes that stick with you among the beautiful displays of fret-board ballet going on that are all his own.  Out of this new wave of solo shredders like Angel Vivaldi, Mendel is where it’s at for me.  He understands his own influences and love for his own style all too well.  It’s so rare that a musician actually understands his own craft this well, even if he may not even consciously know it.

So enjoy.  Mendel’s sophomore album will be out this fall, so prepare for that.  Also I’d get those digipacks while they’re hot; there are only one hundred of them.

5 Responses to “MENDEL: “SHAKING HANDS WITH THE DEVIL / SUBLIMINAL COLORS””