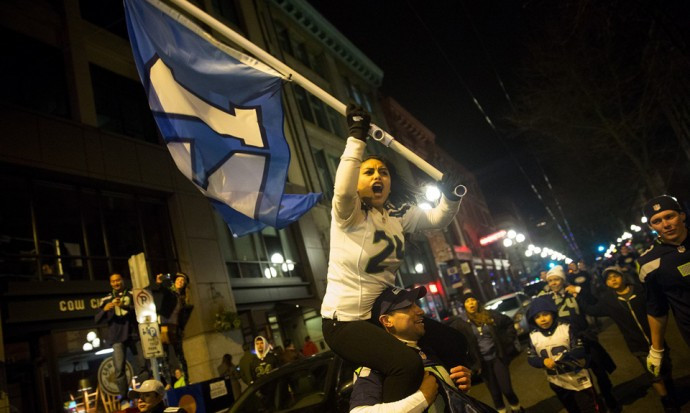 Those of you who aren’t NFL fans or didn’t care about the Super Bowl or, worse yet, were pulling for the Denver Broncos, you may want to skip this post. But that 43-8 win was a long time coming for Seahawks fans, and for the city of Seattle, and I have to do a little celebrating.

There sure as hell was a little celebrating going on in the streets of Seattle last night. It was a good place to be as people flooded outside in a display of mass delirium, the likes of which I’ve never seen here before.

Here are  9 reasons why the Seahawks 43-8 win in the Superb Owl was metal, even though it wasn’t music:

*  The Seahawks were an underdog going into the game but won by the biggest margin of victory by any underdog in the game’s 48-year history. The 35-point margin of victory matched the third-biggest in Super Bowl history — but all those other winners were favored to win.

*  They beat the team with the No. 1 offense in the NFL, the Broncos having set an NFL record for points scored during the season and Peyton Manning (the league MVP this year) having set NFL records for passing yards (5,477) and touchdowns (55). The Seahawks held that offense scoreless until the final play of the third quarter — and those would be the Broncos only points of the game.

*  The Seahawks scored at the 12-second mark of each half (that opening safety being the fastest score in Super Bowl history). Fitting, since the fans are called the 12th Man.

*  The Seahawks’ average age of 26.4 makes them the youngest team to win the Super Bowl (according to data compiled by Pro Football Reference).

*  In addition to being a very young team, the Seahawks are also a team populated by late-round draft choices and led by a second-year quarterback who was a third-round draft pick (his 2013 salary of $526,217 was less than Peyton Manning made per game).

*  Speaking of young and overachieving, it was fitting that the MVP of the game was linebacker Malcolm Smith, who was a 7th-round draft pick in 2011, wasn’t invited to the NFL combine, and didn’t even start a game for the Seahawks until after KJ Wright broke his foot against the 49ers on December 8.

*  The Seahawks are just badass — swaggering, brash, trash-talking, punishing on the field, and ultimately epitomized by Richard Sherman and his spotlight-stealing on-field interview after the 49ers win. And for a city that’s got a reputation for being reserved, nerdy, and more than a little hipster, being represented by a team like that as the victors in the sport’s biggest game is very fuckin’ metal.

*  UPDATE: The numbers are now in: Super Bowl XLVII was the most-watched U.S. television event of all-time, averaging 111.5 million viewers from start to finish. Surprisingly, even though the game was clearly a blowout, the game earned a 44.0/63 Nielsen audience rating from the 9:30 minute mark in the fourth quarter to the end of the game, meaning that even in the final minutes the rating was only 5% lower than it was for the entire game. 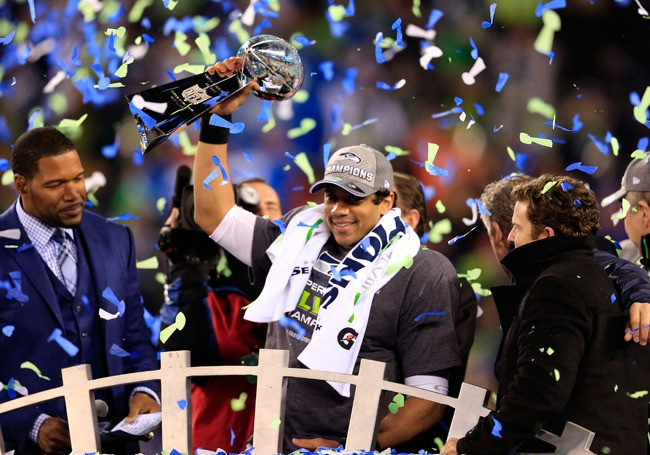