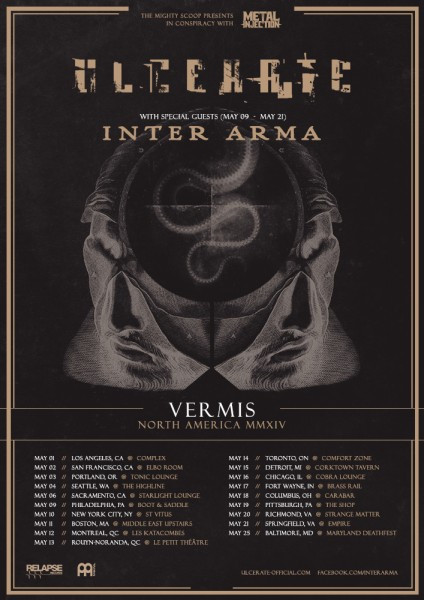 I was separated from the interhole for most of yesterday and therefore missed a lot of breaking news. While attempting to catch up, one of the first things to catch my eye was the tour flyer you see above, waiting patiently in my in-box like a viper ready to strike. To spell it out, New Zealand’s Ulcerate will embark upon the Vermis North America MMXIV tour beginning in Los Angeles on May 1 and finishing with an appearance at Maryland Deathfest on May 25.

That’s tremendously exciting news, but it gets even better, because Virginia’s Inter Arma will be along for the ride on most of the dates. They will join the tour in Philadelphia on May 9 and continue until the final date  before MDF.

This is Ulcerate’s first appearance in North America since their 2012 appearance at MDF. The entire schedule can be seen after the jump, and I’ve also included album streams for the band’s 2013 album Vermis as well as Inter Arma’s Sky Burial. Both of those albums were among my favorites of 2013. This promises to be one crushing tour.

4 Responses to “TOURISM: ULCERATE AND INTER ARMA TO EMBARK ON A NORTH AMERICAN TOUR IN MAY”