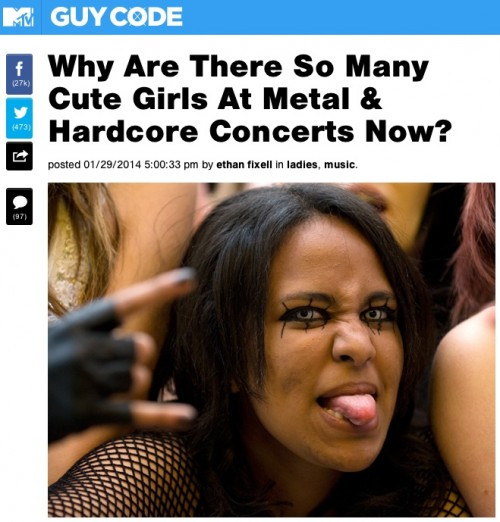 Late last week I saw a reaction to the article, and to comments about the article, by Shannon Void on her FB page. Shannon hails from Philadelphia and is the owner/psychic doomstress of Anthropic Records, home to such fine bands as Hivelords and Sadgiqacea. I liked what Shannon wrote and the way she wrote it. I asked her if I could post it here at NCS. She agreed. Here it is:

So, this MTV article. I have been stewing over it for a couple days. The article is shit and most people know it. The thing that resonates with me right now is really the responses people are posting on it. Yes, great, you have more of a 1% chance of getting laid when there are more women at a show. Great. We are all happy for you. I wasn’t aware that being part of the scene was about that, but, great. I am glad your penis is happy, finally.

Ladies, yes, it’s great that you are attending more shows because, for most of my life, it’s been pretty null and void in the lady department. The bothersome part is that there are women posting about it, talking about how they aren’t as “educated” on the subject of metal or they are new to the scene and people should be more accepting of them, and they shouldn’t have a problem with the article because it’s cool that they are hanging out. Yes, great! I want you to give your money to bands. Yes, great! I want there to be higher attendance at shows so bands can actually, maybe, eat on the road while they are on tour. Yes, thank you!

The thing is, the article is dripping in the sexism that people like me have worked really hard to overcome. And continue to do so. So, I understand how you don’t get why people are upset. Because you are being handed the golden ticket. The free ride. Do I want you to have problems or be faced with blatant sexism while attending a show? Of course not. But I would like for you to shut the fuck up about it and maybe think on a higher level than what MTV is handing you. I also would like for you to at least put your own patches on your jacket instead of leaving it to Urban Outfitters.

The truth is, metal is trending right now. Great. I want it to trend. I want GQ magazine to talk about black metal like it’s a novelty. I want it to trend so that what we are doing can create earthquakes below. We are going to keep doing what we do. And doing it well. I want the shit to get weeded out so that when the shit is gone, we still remain.

The reality of metal is, no matter how trendy or how shunned it is, we are all still doing it. And that, that right there, is something you will never understand or get fully educated on. So, yes, come out. Let me milk you for merch sales. Let me wave my girly looking t-shirts at you so you can sport it all over town. Bring your checkbook. Bring your friends. Bring your fucking hot mother out. I know at least 10 dudes that will try to bang her. Buy beers. Buy shots. Make us rich so we can pump all our money right back into doing exactly what we do. Metal.

As is always true, we welcome your comments (and I’ll be surprised and disappointed if we don’t get some reactions to this post!).