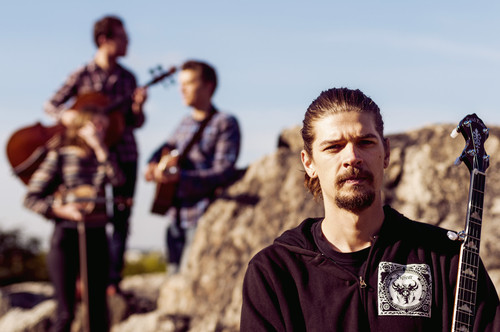 It’s been a while since I last wrote about Erling Bronsberg, so to recap: He’s a skilled banjo player based in Örebro, Sweden, and performs with an acoustic group called Six String Yada, who play old-time American mountain music — with some metal and punk in the mix as well. Every now and then, he records a banjo cover of a metal tune on video. Yesterday he e-mailed me about a new one. This time he has picked a Disfear song named “Fear and Trembling” from their 2008 split with Doomriders, All Paths Lead To Nothing, There Is Only Death.

So, how does Swedish d-beat punk sound on the banjo? Damned good, that’s how. Erling has slowed the song into a doomy backwoods ballad that really works. Dude can sing, too.

I didn’t know this until reading his note on the video, but the lyrics are just one long quote from Søren Kierkegaard:

“If there were no eternal consciousness in a man, if at the bottom of everything there were only a wild ferment, a power that twisting in dark passions produced everything great or inconsequential; if an unfathomable, insatiable emptiness lay hid beneath everything, what would life be but despair?”

Check out the cover below, and after that I’m including the original song, too. To see another one of his covers — Ghost’s “Ritual” — check out this post.