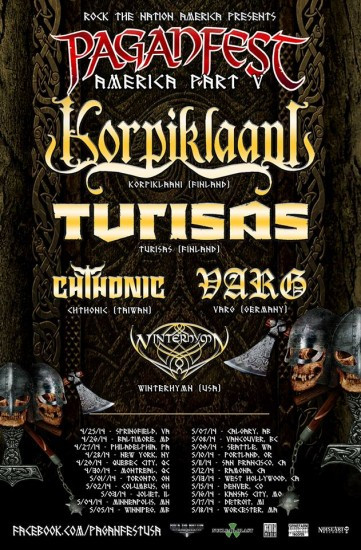 Chthonic: Their last two albums are really good (I hadn’t fully climbed on the Chthonic bandwagon before then), and based on videos, they also look like they know how to put on a kickass show.

Varg: If you haven’t seen this video yet, it pretty much explains why I’m up for them.

Winterhymn: I hadn’t heard of this band before seeing the tour poster. They’re from Cincinnati, they released a debut album named Songs For the Slain in 2011, and a single called “Huntsman” last year. I just listened to it, and these ladies and gentlemen are going to fit in just fine on this tour. It’s a fist-pumping, hair-whipping, full-gallop romp of pagan/folk metal.  They look the part, too. The song and the 2011 album are free on Bandcamp.

So yes, I’m ready for this tour — which makes it a good thing that it’s coming to Seattle. And here are the rest of the dates: