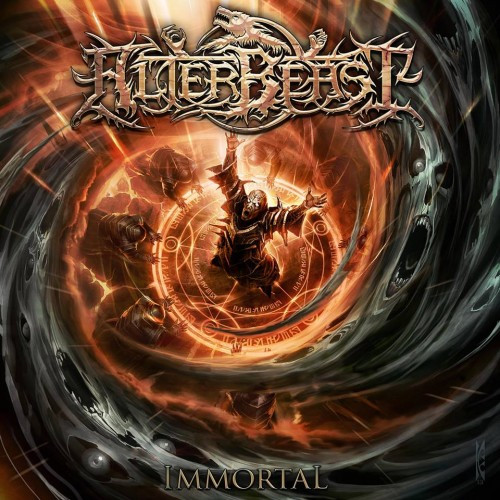 (DGR wrote this review of the new album by Sacramento’s Alterbeast.)

Alterbeast are a group who have been rapidly moving through the Sacramento music scene for a while now, previously operating under the name Gary Busey Amber Alert (G.B.A.A. for short). Anyone who has ever had the opportunity to catch them live over the years could’ve told you that they had huge potential to go places — at the very least to escape the confines of this cowtown. Seeing the group live was like witnessing a controlled series of explosions through a tech-death lense. Thus it was that the group’s signing to Unique Leader came as no shock; the only question was whether the band could capture the intensity of those live performances on a disc.

The group’s name change came with a lineup change as well, meaning that Alterbeast and their new disc Immortal feels almost like the launch of an entirely new band. We at NCS waited eagerly to hear what would be captured on the album, as Immortal remained in the forge for some time — being hammered out at multiple studios, including familiar names like Mayhemness in Sacramento, Castle Ultimate (who have recorded multiple Sacramento groups — you’ll recognize Zack Ohren’s booming drum recording instantly), and Augmented Audio out in LA.

With Immortal still a couple weeks out, we finally got our grubby, disgusting hands on the album and we can confirm for you this much: Alterbeast have themselves one of the strongest launch discs in some time, a relentless, quick, calculatingly violent mix of the current tech-death metal scene, brutal death, and even some of the dark, heavy groove sounds that bands such as Black Dahlia make their trade on. 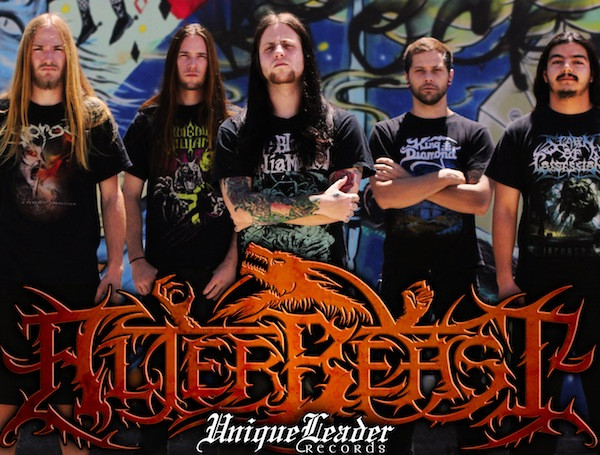 Immortal opens with the song “Flesh Bound Text”, a track that begins with some slightly out-of-tune, off-kilter symphonic playing — providing the band an air of twisted musicianship that carries throughout much of the disc — making it seem as if you’ll be in for a haunting, orchestral experience, until you’re promptly bludgeoned to a pulp by the opening shriek and drum battering that follows.

Vocalist Cameron Rodgers pulls his weight hard on this release, rotating between two pretty distinct ranges: an ear-piercing, glass-shattering high scream and a mid-to-low grunt, often delivered rapid-fire with a ton of words slamming into each other like a car pileup. It slots into the group’s formula like the missing piece of a puzzle, as they switch among the various styles of death metal like a radio auto-searching for stations. His fading-in-and-out screams during the track “Vile Remnants” help make the song. He’s always up front, just screaming his lungs out, even during the couple of slam- and breakdown-heavy segments of the CD such as during “Mutilated Marvel”, which rotates from a fairly quick opening to a mid-tempo stomper of a song; hearing it is like watching a gigantic beast level a city.

(As an aside, Cameron also has a hell of a stage presence and is just a lot of fun to watch — practically acting out each song as he moves from the front of the stage to the back. That has nothing to do with the disc, but if you ever get the chance to watch these guys live, try not to get too wrapped up in waiting to see where he’ll wind up next.)

Human battering ram/Cyborg Gabe Seeber is behind the kit for these guys and makes the drumwork sound just as easy and effortless as he did on The Kennedy Veil’s release earlier this year (seriously, dude is pulling off the Herculean task of sitting behind the kit for two bands at the cd release show on March 29th). There is a reason why this guy is quickly becoming a go-to. He doesn’t so much feel like he’s driving the band this time around, instead keeping pace with the more traditional guitar and vocal section up front.

Dude has a hell of a booming mix on his side too, as the whole rhythm section benefits from having the two-tiered, super-sleek guitars and the vocals up front while they get to just rattle and rumble the background. The bass guitar work is very detectable and even gets its own chances to stand out with small solos and spotlights; combined with Gabe just hammering the shit out of the double-kick drum and blast combo, it is very clear that Alterbeast are a band made up of pros.

One of my favorite things that has been happening recently, especially within tech-death, is the re-adoption of the “drill” riff — the kind of low-end, heavy, tightly picked riff that is buttressed entirely by double-bass drum. This type of riff pops up in “Flesh Bound Text”, for example, and many Sacramento groups seem to be re-discovering it. It’s been moving through much of the scene like a wave, and goddamn, does a good one of those really help a song out. Best part about it is, Alterbeast know those are a precious resource, so they’ve spread them throughout the entire disc, adding to that sense of dark groove that can make you rock out beyond the constant and almost breathless guitar work on the album.

It seems like since we received the promo for Immortal, I’ve done nothing but listen to it almost non-stop, absorbing the whole disc like a sponge; every note, breath, blast, and everything in between. Part of the reason is that the album feels pretty short, coming in at a slender eight tracks of refined and pared tech-death. In addition, much like Inferi earlier this year, Alterbeast move at one pretty constant clip — crushingly fast. Some of the songs on Immortal have been around for a while, meaning that all the tumorous edges have been sheered off over time with much experimentation, leaving each song about as sleek as sheet metal and ready to cut you about as easily.

The group’s preference for the lightning-fast works well for the music here and makes the playing on the disc all the more impressive. The guitar duo of Rusty Cornell and Andrew Lamb switch gears and riffs with ease, adding more and more fuel to the already massive fire of guitarists in the tech-death scene who are adopting many neo-classical-inspired guitar parts and solos, making them somewhat unwitting virtuosos on the technical front. At the very least, the bar has been pushed ever higher on the guitar pyrotechnic front for this type of music.

The eight songs on Immortal move by so fast that you’ll find yourself going through many repeats, and it’s very rare that I’ve ever been tempted to just switch off. If there were ever an album that wasn’t a grind disc but was equally well-suited for a “quick fix”, this one might be it. I’ve found myself multiple times just throwing it on real quick, having my skin sheered off, and then having my corpse fall over on the stop button just so I can get back to work.

Unique Leader are on a tear at the moment, picking up band after band who are perfectly tailored for the current wave that’s rushing through heavy metal. Alterbeast are another feather in the cap of the super-tight, technically impressive, violent, and virtuosic tech-death scene, and Immortal is an excellent debut. Between Soreption, The Kennedy Veil, and this release, the January-Feb-March lineup of releases has turned out to be just great. Alterbeast have a huge chance to stick out and Immortal is just the weapon they need. The songs on this disc have been ironed out and re-forged many a time and have never sounded better than they do on this album. It’s a good beginning to what will hopefully be a long career arc, because even as a younger band these guys have the chance to seize the throne from some other groups.

Since Immortal has been in the forge for a while, it’s also exciting to anticipate that the group could easily have more up its sleeve in short order; it’s a telling sign of a good disc that not only can it be listened to over and over (in my case, far too many times to count) but it can also grant brief looks into a future of exciting possibilities, the sort of thing that makes you want a band to succeed beyond just the “professional homeless person” level of existence.

When Immortal hits, I strongly urge you check it out, because the surgical dismemberment that Alterbeast put you through on this album hasn’t felt this good in a long time.

Immortal will be released on March 18, 2014, via Unique Leader. Preorder packages are available here. Listen to three tracks from the album below.